ArenaNet's Guild Wars 2: Heart of Thorns, the first expansion for the MMORPG released in 2012, is now live. President and Co-Founder Mike O'Brien said:

This has been a memorable year for ArenaNet and our Guild Wars 2 player community. We energised our fans in January with the announcement of Heart of Thorns as the first expansion to Guild Wars 2, and we’ve seen steady growth in our player base ever since.  Our community is widely recognised as one of the best and friendliest in MMOs – many of our veteran players organised in starter zones to welcome new players the weekend we made the core Guild Wars 2 game free.  We’re eager to see how our fast growing community continues to flourish, and we hope they’re eager to embrace where their Guild Wars 2 journey takes them next in Heart of Thorns. 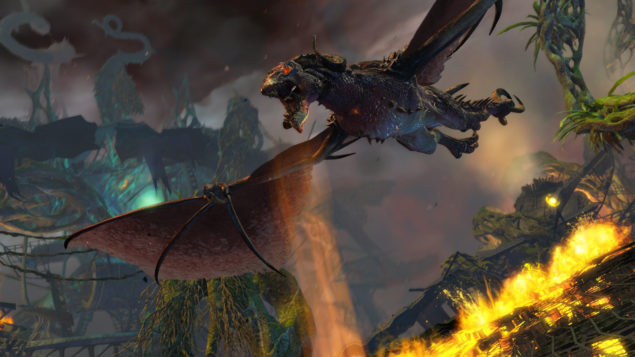 Since the core game became free two months ago, Guild Wars 2 has seen significant growth and that's highlighted in a handy infographic. Over 7 million accounts have been created, for example, and 1.4 billion gameplay hours have been recorded since launch.

The main new features of Guild Wars 2: Heart of Thorns include Masteries (a new form of character progression), Raids (10-man instanced dungeons for the greatest PvE challenges) and Guild Halls.

Those are just the tip of the iceberg though, since a new profession (the Revenant) is being introduced and each profession will get an elite specialization. Moreover, PvP is getting a new MOBA inspired game mode (Stronghold) along with PvP Leagues, while WvW gets an entirely new map (Desert Borderlands) to play with.

Of course, there's also the entire new Heart of Maguuma zone, which is comprised of four maps and has been designed to exploit the vertical element as well (players will be using gliders a lot here).

Here's a bunch of new Guild Wars 2: Heart of Thorns screenshots along with the official trailer.