The graphics options for GTA V PC version have been detailed by PCGamer showcasing support for a wide array of configuration settings which will be used to optimize performance for both AMD and NVIDIA powered GPUs. Furthermore, the graphics settings for GTA V PC version have been revealed just a day after the game went on pre-load on Steam and topped the charts as the best selling game (Pre-Order). 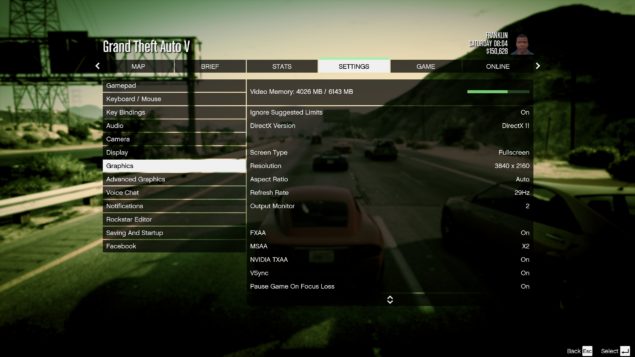 While you would usually find me covering technical articles, a game as grand as Grand Theft Auto V does deserve at least one post from a hardware guy like myself. Here I am summing up an article which I thought was an interesting read from the guys over at PCGamer who have just got their copy of the game up and running to show us a brief look at the graphics options which will be featured in the PC version of GTA V. Well, there are quite a lot of options in the game as expected and from the system requirements provided officially by Rockstar, the game doesn't seemed to be much intensive however what I have come to know over the course is that system requirements published by game developers are just worth a look at and don't mean much since much of the requirements depend on proper system optimizations, driver support and how well or stable the PC configuration of an individual performs.

Starting with the graphics settings, first of all is the traditional video memory utilization bar which shows how much memory is being used by the game. There are no system configurations revealed for the PC that was ran however it seems like the total video memory available at hand is 6 GB which points out to a GTX Titan / Titan Black (I may be wrong on this). The game consumes 4 GB of VRAM at 4K (3840x2160) resolution but that is at very much expected from the title. The DirectX version could be configured to either DirectX 9/10/11. Unlike previous claims, GTA V PC version doesn't support Mantle API and would not make use of DirectX 12 either since that API is still a few months away from launch in the first title which is considered to be Fable Legends. Other monitor options include Aspect Ratio adjustment, Refresh Rate Adjustment and the number of monitors to output the game (2 in the case of PCGamer).

The more juicy bits are at the bottom with the game supporting three tiers of Aliasing options, FXAA being the common and fastest method, MSAA being the more performance expensive but provides better image quality and then we have NVIDIA's TXAA option which is less taxing than MSAA and provides results similar to SMAA 8x. Far below, there is an option to enable VSync but those with GSync or Freesync monitors will be getting proper support through driver updates.

There are several sliders at the bottom to which can be adjusted to decrease or increases population density and distance scaling. Textures, Shader Quality, Shadow Quality, Reflection Quality, Reflection MSAA, Water Quality, Particles Quality, Grass Quality and Post FX options are available to hand and PC users will spend a well worth time just adjusting the game to there needs which is what makes the PC, PC. Lastly, three options are avaialble to users for adjusting soft shadows, leave them to either soft or enable NVIDIA's PCSS (Percentage-Closer Soft Shadows) or AMD (Contact Hardening Shadows) soft shadows effects. Following is a list of all the options available to users as compiled by PCGamer:

Even with months of delay after the GTA V current generation console versions, it seems like Rockstar have actually put real effort in making GTA V PC version the best version of the game of all platforms. While the delay certainly had us PC gamers left a bit saddened, it seems like team at Rockstar might actually make up their reputation amongst the PC audience. 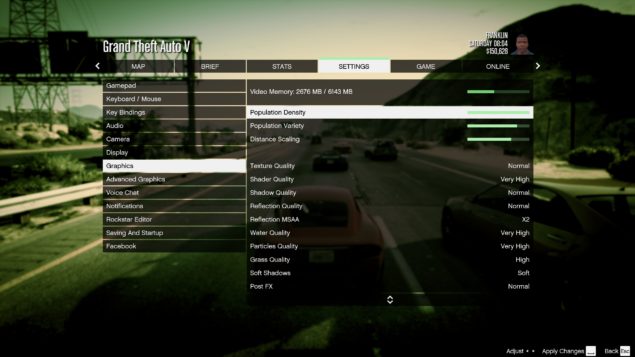