Since its reveal back at this year’s E3, Rockstar has rolled out several sets of screenshots showcasing how the next-gen GTA V, the remastered version of the last-gen’s most critically acclaimed and best-selling video game, looks like on PC and the latest consoles, and with every new batch of screenshots, it looks like the game is more enhanced and graphically detailed than showcased before. Both GTA V and its online multiplayer mode known as GTA Online have been completely dipped into next-gen visuals and this latest batch of screenshots from Rockstar shows the stunning new graphical improvements and texture details that the game as well as its online multiplayer mode retain on PC, PlayStation 4 and Xbox One. 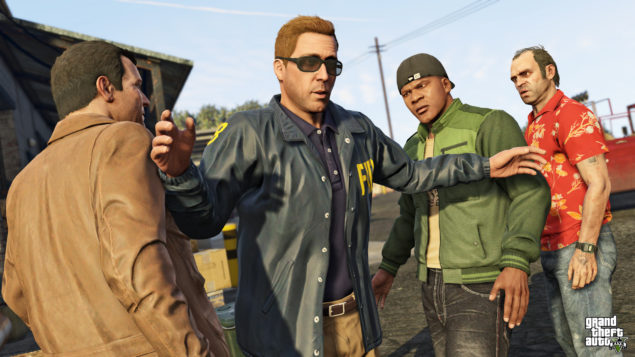 Rockstar has been out on the front recently with the next-gen GTA V. Confirming that the upcoming action-packed open world game will run at a native resolution of 1080p and 30 frames per second on the PlayStation 4 and Xbox One consoles, and will support up to 4K resolution on PC, the developer released a lot of additional details about the upcoming game along with screenshots and a trailer that showcased one of the most prominent upgrades included in the game; the first-person shooter mode. All of the in-game media content from the next-gen GTA V clearly shows that it isn’t just an ordinary remaster of 2013’s game, in fact, Rockstar has apparently doubled the effort that was put into the development of the original game.

Along with GTA V, its online multiplayer mode, known as GTA Online, will also port over to PC and the latest consoles, and will equally enjoy the new graphical enhancements and improvements. Today, Rockstar released a batch of new screenshots showcasing how the remastered versions of the best-selling game and its online multiplayer mode are not limited only to a ducky visual boost, in fact, they represent a true generational leap and show how the latest hardware can be used to produce new textures, details and other graphical effects from the ground in an already released video game.

GTA Online is also getting gameplay upgrade besides graphical revamp. Player count has now been increased to 30 players, with two additional slots for spectators. Players on the latest platforms will be able to enjoy new 30-player activities and jobs. According to Rockstar, the GTA Online character creator has been “completely overhauled,” and now offers greater customization with more than 120 newly added props. Without further ado, you can check out the GTA V and GTA Online screenshots below. For complete gallery, visit the game's official website here.

GTA V will hit the PlayStation 4 and Xbox One on November 18. The PC version of the game is currently being polished and will arrive early next year on January 27. Stick around for more information and details about the game as we will publish them here as soon as we get our hands on any.