Following a tease made by the developer, Codemasters has now announced a new upcoming installment in the GRID series known as GRID: Autosport. The game will be the third title in the GRID franchise and a sequel to GRID 2 that was released last year. The game will reportedly be released on June 27, 2014. Below are the first screenshots of the game revealed by the developer. 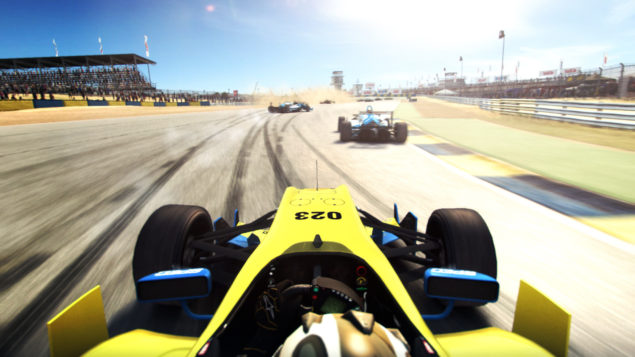 Unless you have no affection for racing games, you know that GRID 2 is one of the most famous racing video games released on Microsoft Windows, PlayStation 3 and Xbox 360. Codemaster managed to keep the quality of the game higher than the Dirt series and in meantime, give more on-track real-racing experience to the players.

Recently, some leaks and rumors emerged on the web regarding a new upcoming GRID game reportedly known as GRID: Autosport. The developer of the game franchise also published a teaser video on GRID's youtube channel and now according to BrasilGamer, Codemasters have officially announced GRID: Autosport.

The biggest flaw detected by gamers in GRID 2 was the lack of cockpit view. But it is for sure that Codemasters will be adding a cockpit view to GRID: Autosport. "Cockpit view? We listened" the developer mentioned on neoGAF before officially confirming the game. In addition to this important feature, the upcoming racing video game will pack several new updates.

Confirming the game officially, Codemasters said that GRID: Autosport includes most content of any GRID game to date. While holding on to all the past features included in the GRID series, GRID: Autosport will also offer enhanced real-time racing experience. New features include improved and vast racing tracks, new cars and long night drives and the cockpit view.

The game will include a normal single player offline career mode, playing through which, players will be able to recruit teammates and earn sponsorships. Online multiplayer mode will also be included, connecting the players to racing clubs, community weekly challenges and raceNet leaderboards. GRID: Autosport will pack five different styles of racing and enable players to surf over 100 tracks at 22 different locations.

Below are the first screenshots of GRID: Autosport published by BrasilGamer.