Grand Theft Auto 3 and Grand Theft Auto: Vice City could be headed for the PlayStation 3 due to them both showing up on the ERSB website, this is great news for fans of the old games who miss the games that started the fan base for GTA. Rockstar ported GTA 3 for the iOS so why won't they be able to port GTA 3 and GTA Vice city for the PS3? Hopefully the game will come with trophies, improved textures and much more improvements. Right now Sony and Rockstar are mum about the thing but can you really call two different games showing two different ratings on ERSB official site a fluke?

Back in the days of the PlayStation 2 these 2 games were the must own games for every teenager and adult, these two games made Grand Theft Auto what it is today and these games even today are remembered as endless classics and legends of their series, for those of you who want to relive those glory days it looks like you will get that chance. Grand Theft Auto 3 AND Grand Theft Auto: Vice City were both spotted on the ERSB website and the games are (so far) planning on being PS3 exclusive. Whether the game will distributed via discs or via the PlayStation Store is still not known since Sony and Rockstar are both still hush about the whole deal. 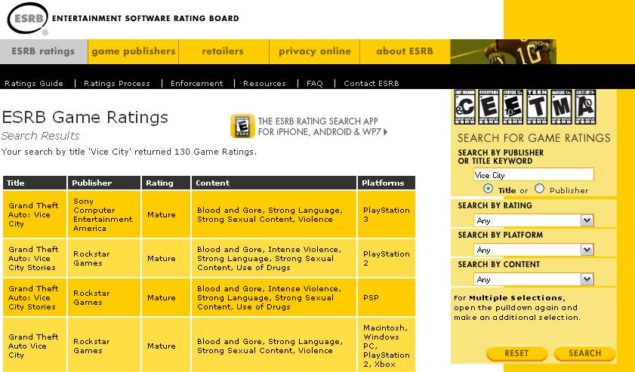 To be able to play both these games without the need of a PC / PS2 would be amazing and with the added incentives of trophies this will definitely encourage people to replay the game from beginning to end and will even show new comers to the GTA series on what classic GTA games were like back in the glory days. I hope that the news gets some official confirmation and a release date for both.