When the Bats away crime will play! Gotham City is a fairly unique game in the sense that while it does borrow elements from the Batman universe you don't play as the Dark Knight himself you instead play as either a member of a rogue gang of Jokers or a poorly dressed Batman, judging by the trailer the game looks a LOT like a mixture of Team Fortress 2 meets Brink but I highly doubt this game will have a Single Player story to play by and will only be focused on Multiplayer just like Team Fortress 2. 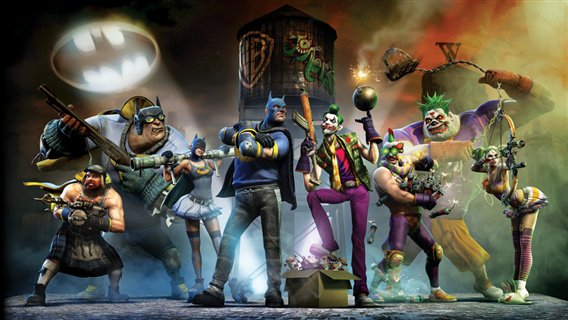 Gotham City Impostors is a new game being worked on by Monolith Studios and Warner Bros. Games while the name is a bit misleading you do NOT play as Batman at any point but you can however play as a gang of Jokers OR as Batman impersonators either way your weapons and gadget will be limited compared to what Batman / Joker have, while there isn't much details on the game aside from a simple trailer the game is scheduled for a 2012 release date for the PC / XBOX 360 / PS3, whether this will be a retail disc launch or digital download only via Steam / PSN / XBL etc is still unknown but this game DOES look pretty interesting for something that doesn't offer a story line centered around Batman and his arch foes.

Like I mentioned earlier the game looks like a hybrid of Brink meets Team Fortress 2, but that can only be confirmed once gameplay videos are out. But considering there are plenty of better games coming out this year I am pretty sure that the videos will definitely slip under a lot of peoples radar.