Google is advancing forward to bring iOS 9 app content closer to Safari search. Users with iOS 9 running devices will now be able to see app content in their Safari search results. Google's app indexing feature has enhanced its compatibility with deep HTTP link standards, integrated in iOS 9. iOS 9 users can experience app content in search results by the end of this month. Deep linking is one of the features that software giants like Google can take advantage of and provide enhanced searching utility for users. 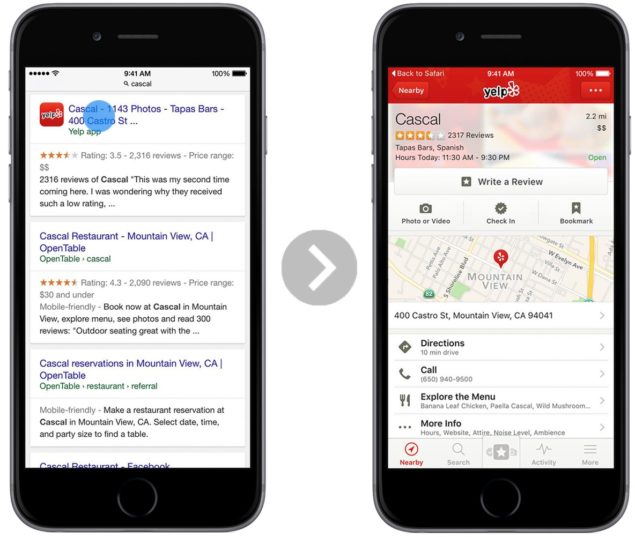 Even though it may sound simplistic, the operation has a lot of utility importance for users. App indexing for iOS apps was first introduced in May that allowed in-app content to show in search results. The results are directly linked to the app that makes it easier for iOS users to carry forward their search in the corresponding app.

Google's Improved App Indexing To Be Available By October End

Google's coined the notion that content found on Google just got easier to get with deeper app integration with safari search on iOS 9. For users to take advantage of the app integration between Safari search and iOS 9 apps, developers must first add Universal Links to their iOS device application using the App Indexing API from Google.

With the arrival of deep linking of search results and iOS 9 applications, the improved operation no longer has support for the previous iOS 7 and iOS 8. Apple has also integrated its iOS 9 with similar linking between app content and Spotlight search. It follows the same mechanism that enacts as the linkage between apps and searched content.

It all ends on the way users search their content. Even though some apps have a direct search bar within their apps, Google's app indexing has sorted out an alternative way for users to look for their content. So if users search for Yelp! content through Google on Safari, the search results can be directly tapped to open that specific content within the app, pertaining you have the app installed.

Google's deeper integration between search and app content is a handy day to day tool that provides an easy way to search for content. Developers will take advantage of this deep integration to bring web and in-app content closer. This is it for now, folks. Share your thoughts on Google's improved App Indexing for iOS 9.