From cyber thieves to the one stealing your credit card information, numerous techniques have been developed to seize your data without your concern. Since payment methods are now making their way to the mobile industry, it might open several other dimensions for hackers to steal your personal or financial data. As technology advances so does the negativity associated with it and enumerable tools and what not, have marked easy vulnerable elements as their direct target.

Public Wi-Fi's have always aided us in many sorts of ways but little did anyone know that these connections can extract data directly from your android smartphone. Hence, Google is working on a project to make these connections secure for its users. Google is currently working on the VPN service for android which can prevent any damage from third party Wi-Fi sources.

The Protect And Hide Strategy?

For all those non nerdy people here, a VPN or a Virtual Private Network can defy any known or unknown source to secure your device and its information. Rumor has it that the latest android update would put this feature on a standard addition.

A new system application has been discovered by Pocketables known as the ''Google Connectivity Service'' which runs on Nexus 6 running the latest android update - Android Lollipop 5.1. Google's expectations and intentions  are deceived nonetheless!

The Google Connectivity Service application cannot be accessed with standard operation commands like just tapping it. Instead it can only be viewed in the list of applications in the Setting menu of Android. Once the application is launched, a pop-up is prompted which reads ''Google VPN''. It further reads that, "To help protect you on open Wi-Fi networks, your data will be transmitted securely through a Google VPN," 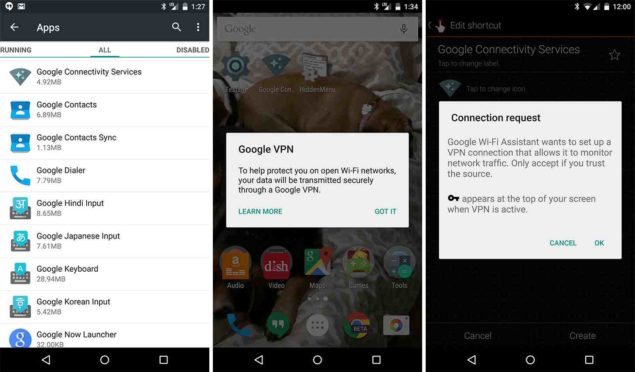 It can be speculated further but what it reads does not simply mean the connection of device to a VPN alone. This can be Google's project to secure the public Wi-Fi connections maybe. However, no possible conclusions can be drawn just yet since the stage is pretty early to suggest that Apple is working on a VPN service for Android.

It might be nebulous when Google's VPN service arrives, for the time being, reports have been requested from Google itself and it can arrive anytime soon. For now, let us know if you find out any information regarding it and share your thoughts in the comments.