It has been some time since Google Play Store got a new user interface update. As far as the memory serves, the last update arrived back in 2019 when the Google Play Store received the revered Material Design that we have now grown to love. Ever since that, the app has received small UI updates, but overall, the design has remained the same.

However, today, the Google Play Store has received a new update that gets rid of the hamburger menu. This is being done so these hamburger menus do not conflict with navigation gestures because we have all experienced touch inputs we did not want to initiate. Starting today, opening the Play Store will now take you to the following layout. 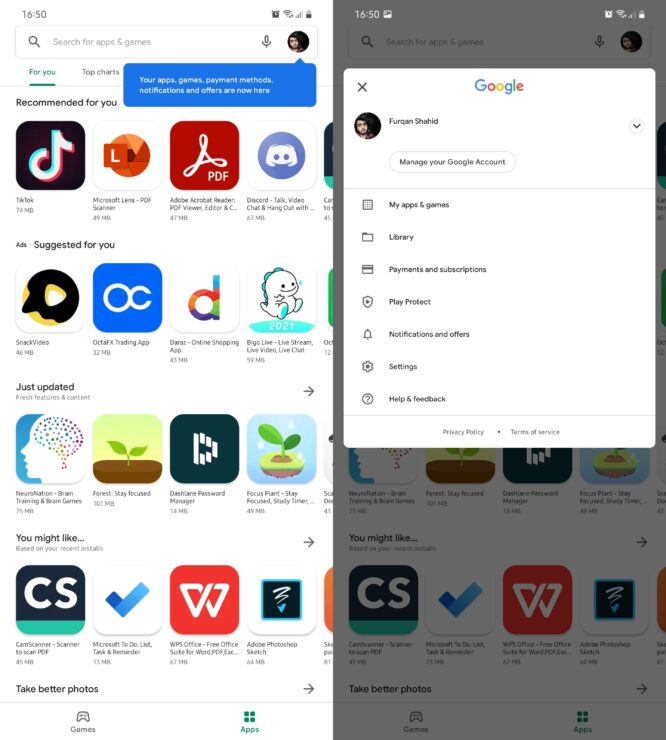 There have been additional changes, too. For instance, everything has been moved under the profile section located in the top right corner. For anyone who is using multiple accounts, you can now find them under the collapsable drop-down menu. In addition to that, below the account tap, we can see everything used to be a part of the hamburger menu. Additionally, the library has replaced the Wishlist, while Payments and subscriptions are now merged.

Moving forward, the new Google Play Store update does not do much with My apps & games, Play Protect, Notification and offers, and Settings menu since they are still the same. You also see the Setting getting a revamp with all options and preferences now being divided into four collapsable categories, which cleans everything up since before that, everything was just a mess of a giant list.

This change has been in testing by Google for some time now, and that is why some users received this UI change before others did. But, as we speak, this change is now rolling out to all the users around the world.

If you have not seen the change so far, try clearing the cache of your Google Play Store, or try force closing it and opening it again, and that should get you in the door.