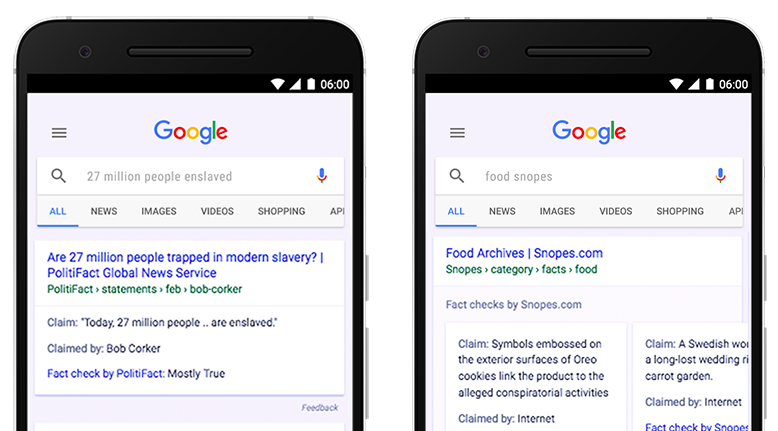 In a move to curb the number of hoaxes making their way to online search, Google has announced a new strategy. The search engine giant is integrating an enhanced version of Fact Check tool that was first introduced in October last year to keep a check on fake news inflow. The Fact Check tool was initially kept limited to Google News and two countries - the USA and UK.

Now, in the latest move, Google has rolled out the tool globally and has also integrated it in Google Search along with Google News.

With thousands of new articles published online every minute of every day, the amount of content confronting people online can be overwhelming. And unfortunately, not all of it is factual or true, making it hard for people to distinguish fact from fiction. That’s why last October, along with our partners at Jigsaw, we announced that in a few countries we would start enabling publishers to show a “Fact Check” tag on Google News for news stories. This label identifies articles that include information fact checked by news publishers and fact-checking organisations.

After assessing feedback from both users and publishers, we’re making the Fact Check label in Google News available everywhere, and expanding it into Search globally in all languages.

Before you believe that Google will assist you in marking hoaxes for every search, we would like to enlighten you that Fact Check would be offered for particular searches only. Also, Google also points out that it is running the checks itself, and neither it is censoring results on its own. The fact check results show pages from different publishers and Google presents it in the results to help users in making informed judgments.

Also, there could be occasions when Fact Check offers more than one conclusions for a theory or a search term. It shall still be users' call to believe it or not as the information presented in the results is based on what the source thinks.

Google also affirms that any website could be considered for being included as a Fact Check source. However, it still means that only a few from the lot will be able to make it to the list of source.

Only publishers that are algorithmically determined to be an authoritative source of information will qualify for inclusion. Finally, the content must adhere to the general policies that apply to all structured data markup, the Google News Publisher criteria for fact checks, and the standards for accountability and transparency, readability or proper site representation as articulated in our Google News General Guidelines.

The popularity of any website would act as the primary tool for Google to identify its content authenticity. For now, we do not know if Google has any other criteria for including the websites.

It is worth noting; Google faces similar trouble when ranking the search results by popularity. The company wants to keep the process transparent without letting out the internal information, as that can help websites in manipulating the ranks. On the contrary, Google does link its fact check tool to the fact-checking sites run by Duke.

Here are the points that Google considers for including a website in its Fact Check list - A website that takes all parties and sides into account; examines the claims throughly and reaches conclusions accordingly; keeps a track of political promises, has a transparent approach for sources and methods; does not hide fundings and affiliations; and also discloses whether its primary mission is news and information.