Google has made it pretty clear they don't like Windows Phone 7, or they just don't consider it big enough to have any importance, which is why there isn't a single Google app for WP7. With the arrival of Google+, users running the latest official update of WP7 (NoDo) were in for a rude shock when they found out their primitive IE6 cannot open the mobile version of Google's shiny new toy. However all may not be lost as a mysterious picture has surfaced showing a Google+ app running on a HTC trophy. 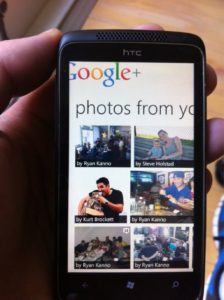 The picture in question was posted by Kevin Marshall who belongs to the group that developed the Facebook application for Windows Phone. He posted this on his twitter profile. Looks pretty authentic I must agree, but I see no reason for Google to release this application for WP7 at this point in time so it might just well be a very good Photoshop attempt.