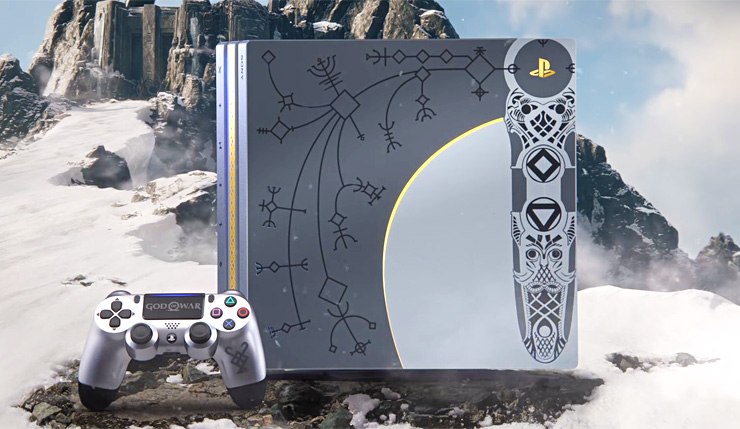 Still not sure whether or not you want to pick up a PlayStation 4 Pro? Well, the release of God of War could be the time to finally take the plunge, as Sony has unveiled a spiffy new limited-edition version of their souped-up console. The God of War PS4 Pro features a nice gray and gold design inspired by Kratos’ new battle axe – check out a few images of system, below.

Here’s what God of War developer Santa Monica Studio had to say about the new PS4 Pro:

“When we designed Kratos’ new Leviathan Axe, we knew it would have far more meaning not only to the game, but to our fans. Santa Monica Studio was extremely proud to adorn the custom PS4 Pro with the Leviathan Axe in such detailed fashion.

The top surface is the Axe skill tree you’ll use in-game to upgrade your axe, along with the runic gem slots on the handle that enable unique special attacks. The side panels are trimmed with a beautiful Norse design, and the runes each represent a realm in the game. The Leviathan Gray DualShock 4 wireless controller has the Huldra Brothers brand on it, and a very subtle God of War logo on the touchpad.”

Of course, God of War will come with a variety of enhancements on the PS4 Pro. These include 2160p checkerboard 4K and supersampling for those playing on 1080p screens. The game also supports HDR and wide-gamut color across all PS4 models.

So, how do you like the God of War PS4 Pro? Yes, I know, it’s not as powerful as an Xbox One X, but I’d say it’s one of the better-looking limited edition designs Sony has cooked up (for whatever that’s worth).

The God of War Limited Edition PS4 Pro launches alongside the game on April 20 at a price of $400.