New York-based chip manufacturer Global Foundries Inc has rejected rumors of a takeover by Santa Clara chip giant Intel Corporation. The rumors surfaced last week when a report by The Wall Street Journal claimed that Intel was interested in acquiring GlobalFoundries and was negotiating with the Emirati Mubadala Investment Co., an investment arm of the Abu Dhabi government.

Following The Journal's report, GlobalFoundries chief Tom Caulfield denied that the story had any substance in an interview given to CNBC's Jon Fortt on Monday. During the interview, the executive also shared his views on the state of the chip sector and his company's expansion plans.

In the wake of the growing demand for chips worldwide in the wake of the ongoing pandemic, contract chip manufacturers such as Taiwan's Taiwan Semiconductor Manufacturing Company (TSMC) struggled to keep with customer orders. TSMC, in particular, reported a bumper second quarter earlier this month, and the fab's growing business resulted in speculation that perhaps the chip sector is heading towards an inventory correction as the demand-boom subsides and companies are left with excess inventories.

During his talk, Mr. Caulfield outlined that cyclicality concerns are unfounded since the chip sector has to "double every eight years." When asked whether this growth will be limited to certain process technologies or whether it will be across the board, he replied:

So, specifically, it took fifty years for the semiconductor industry to be about half a trillion dollars. And the demand that society, the world needs for this accelerated digital transformation is to double that in the next eight to ten years. Now, it's...it's all technologies. It's memory. It's flash. It's DRAM.  It's what we call pervasive semiconductors. Not just single-digit nanometers. Look what happened to our industry. With the advent of the smartphone fifteen years ago, we went from a compute-centric deployment of semiconductors, it was all about computing.

And then, not quite overnight, but over the course of fifteen years, everything developed the need for semiconductors. New use cases. And so what used to be 70% of the market was compute centric, that's only 30% of the market now. 70% is this broad pervasive use of semiconductors, that's where GF plays and that's why it's really important we make the necessary investments to continue to create those feature rich chips for these amazing applications. You know, connectivity, secure connectivity,  edge compute, those are the type of areas we play in. 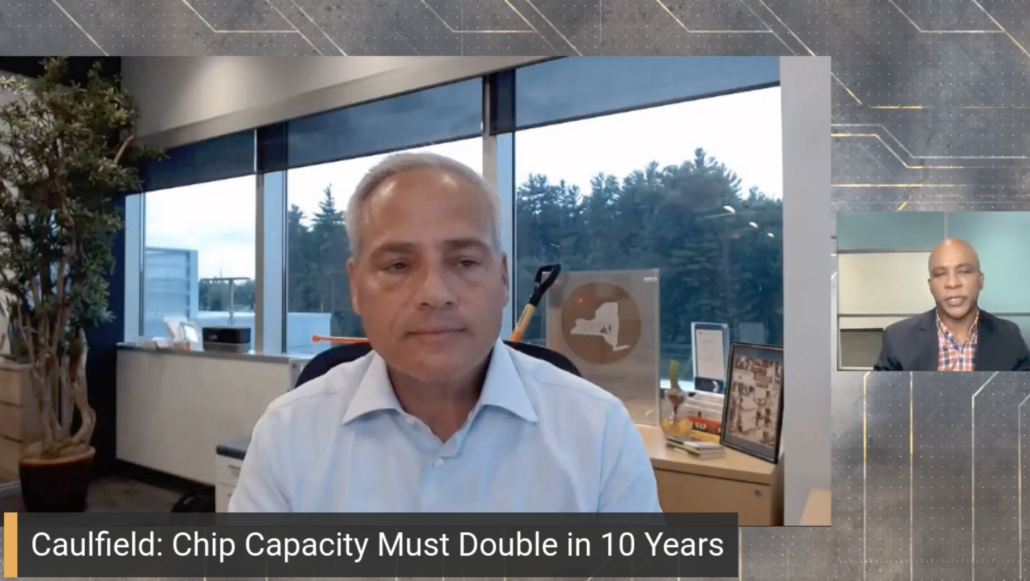 Well I think the fundamental issue that's being addressed is today 48% of semiconductor demand, that half a trillion dollars I spoke about before, comes through U.S.-headquartered companies. So plenty of demand for the U.S. to manufacture. But we've found ourselves today where we're only 12% of the manufacturing, you know the global imprint from U.S. manufacturing is only 12%. And that's the imbalance the U.S. is trying to fix, for economic security, for supply chain security, you know national security. And they need to do, and they have begun is to create industrial policy that enables U.S. manufacturing.

...It's about an ecosystem, it's not enough to just make the wafers, we need to be able to process the wafers, the semiconductors after they're built to chips and then chips get packaged. It's about having raw wafers that we take into our factory to create processors. So you need a holistic approach in supporting the industry so you can have an end-to-end supply chain. By the way, most of that exists in the U.S., it's just a question of scale and content. So you can invest to build this. We didn't get here overnight, so we're not going to fix this overnight. You need a concerted effort with these types of investments. Today GF took its first step to be part of that equation for the country.

Finally, he also denied that rumors of GlobalFoundries being acquired by Intel had any substance. Intel, who announced its push in the contract chip manufacturing space earlier this year, is expanding its chip manufacturing footprint, and Mr. Caulfield outlined that:

Look, uh, there's nothing to that story. We said that Friday, I'll say it again today, you know we're focused on executing our business each and every day and that's really front and center for all of us.

GlobalFoundries plans to build a new chip factory close to its headquarters in Malta, New York it announced on Monday alongside plans to boost its existing chip output to 150,000 wafers per month by spending $1 billion. The announcement came after the U.S. Senate passed a historic bill outlining investments in the semiconductor sector to secure chip supply chains and boost American competitiveness against China.