The Ultra Durable series is the mainstream lineup which goes upto the Z87X-UD5H while the overclocking series consists of the Z87X-OC and Z87X-OC Force motherboards for overclockers. For enthusiasts, Gigabyte has the G1 Sniper and Killer series motherboards which are detailed below: 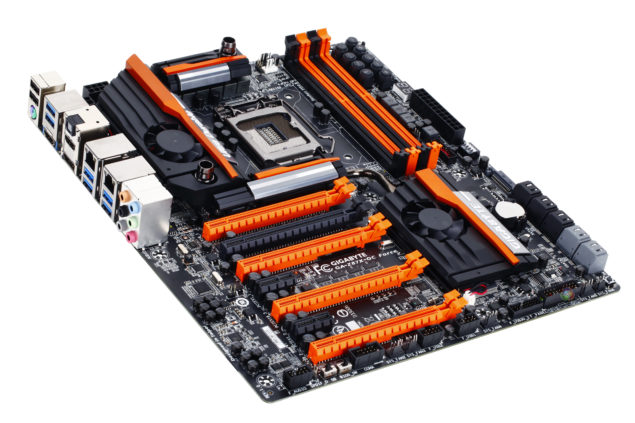 The Gigabyte GA-Z87X-OC Force is truly Gigabyte's Z87 chipset based flagship part with a VRM area that sits beneath a hybrid cooling system. This ensures that water cooled rigs get the most performance out of their processors through overclocking. The motherboard has a cool orange and black theme design which looks amazing. The four set of heatsinks are interconnected via heatpipes to circulate cooling efficiently.

Expansion slots include five PCI-e 3.0 x16 and two PCI-e 3.0 x1 slots and for storage there are 6 SATA 6GB/s and two SATA 3GB/s ports. The motherboard comes with Dual UEFI BIOS and has a ton of switches for overclocking near the DDR3 DIMMs including a debug LED. For I/O, there's Dual Gigabit Ethernet LAN Ports, a 7.1 Channel audio jack, 6 USB 3.0 ports, SPDIF, HDMI and a display port. 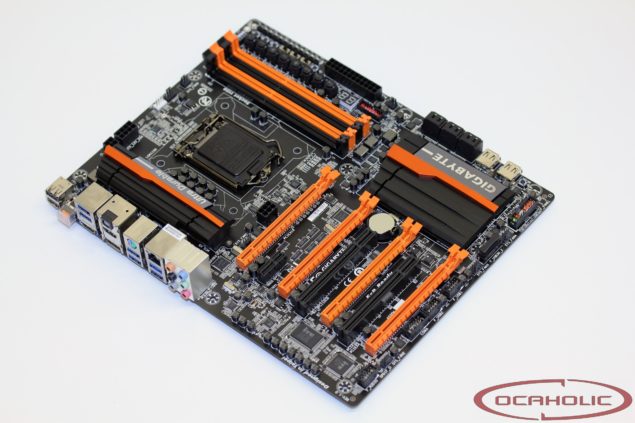 The Gigabyte GA-Z87X-OC comes with an 8 Phase Solid VRM which makes use of DRMOS, International Rectifier MOSFETs which provides overclocking best stability and reliable power supply. The motherboard has a orange and black design scheme.

As for features, the GA-Z87X-OC has several buttons for overclockers on the board. It comes with an 8 vrm. These include BCLCK, Turbo, Gear, Power switches at the side of DIMM slots, Voltage measuring points, Debug LED and a Dual BIOS switch. There’s also a LN2 switch which can disable the Dual BIOS option on the motherboard. The Z87 PCH is covered with a blue heatsink which is also not a final design, comes with Four PCIe 3.0 x16, 2 PCI and a single PCIe x1 slot. Power is provided through an 8 Pin + 4 Pin connector which adds additional juice to the CPU for overclocking. For storage, the board offers 6 SATA 6GB/s ports with two onboard USB 3.0 ports and 6 via I/O rear panel.

The Gigabyte Sniper series is the next in line to replace the Z77 based G1.Killer series motherboards. The G1. Sniper series motherboards allows users to manually replace the onboard AMPs and select from a range of eight different AMPs that can be customized through Gigabyte’s editing and configuration suite. For now, only the G1.Sniper Z87 motherboards have been announced to make use of the AMP-UP technology feature set that features Gigabyte’s upgradable OP-AMP, Creative Sound Core3D with gold plating shielding, Audio Noise Guard with path lightning, Build-in gaming heatphone amplifier, 15u plated gold connectors that includes HDMI, Audio jacks and displayport and Nichicon High-End audio capacitors. You can learn more about the AMP-Up Features here.

The Z87 G1.Sniper 5 comes with the green and black design scheme of the Killer and Sniper series motherboards from Gigabyte. It has a hybrid air and liquid cooling solution that cools the electrical components near the CPU socket and a heatpipe solution that runs towards the PCH heatsink. Storage includes 10 SATA 3 ports, Four PCI-e 3.0 x16 and 3 PCI-e 3.0 x1 slots offer expansion cards connectivity.

While the G1.Sniper 5 comes in the ATX form factor, Gigabyte also revealed their Z87 G1.M5 which features a Micro-ATX design, three PCI-e 3.0 x16 and one PCI-e 3.0 x1 slot for expansion and 6 SATA 3 connectors.

The rest  of the lineup is made up from the Ultra Durable series motherboards which include three parts: 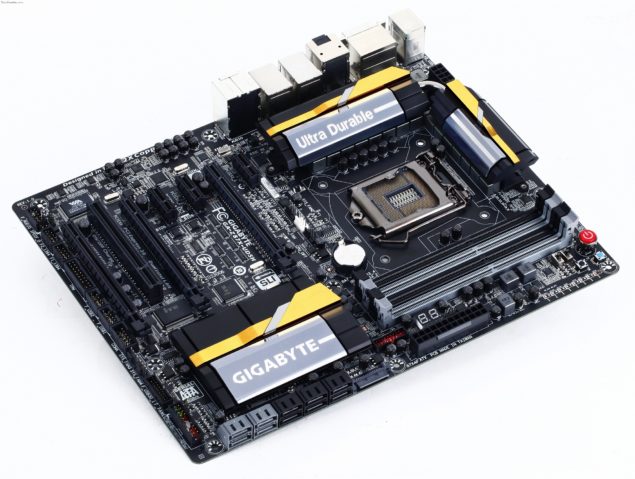 GIgabyte is also preparing and teased their what is supposed to be the GA-Z87X-UD5H motherboard.It has a 16 Phase VRM, an 8 Pin connector for CPU Power delivery, several overclocking features, 10 SATA 3 ports. three PCI-e 3.0 x16, three PCI-e 3.0 x1 and a single PCI slot.

The motherboard comes with a yellow and black design theme and is fitted with the top of the line Ultra Durable 5 components.

With the GA-Z87X-UD4H, Gigabyte also enters the red and black theme color battle that’s ongoing between other manufacture’s such as ASUS, MSI and ASRock. The Gigabyte motherboard keeps it simple yet sleek which gives an overall great look. The GA-Z87X-UD4H comes with a 16 Phase VRM and is equipped with the Ultra durable 5 design with features similar to the GA-Z87X-UD3H such as ll IR Digital Power Design (IOR International Rectifier) with IR digital PWMs equipped with IR Powerstage ICs. The PCB itself is a 2 layer copper design and equipped with Durable black solid capacitors.

The Z87X-UD3H features the LGA 1150 socket to support Haswell processors. It comes with a Black, Blue and Gray color combination and has three sets of heatsinks, two sitting on top VRM phases and a single sitting on top the Z87 PCH.

For expansion slots, the motherboard features three PCI-e 3.0 x16 slots, three PCI-e 3.0 x1 slots and a single PCI slot. It offers both SLI and CrossFireX functionalities. The price was not mentioned but it would be cheaper than the high-end Z87 motherboards that Gigabyte has to offer on Haswell’s launch.