Gigabyte has unveiled their impressive Z170 Gaming G1 motherboard lineup at Computex 2015. The boards which were pictured by itfree4u have an updated design scheme and tone down the red color scheme which has long been adopted by motherboard makers for their gaming branded products. The three Z170 G1 Gaming motherboards revealed by Gigabyte are based on the LGA 1151 socket which allows support for Intel's 6th generation Skylake processors. 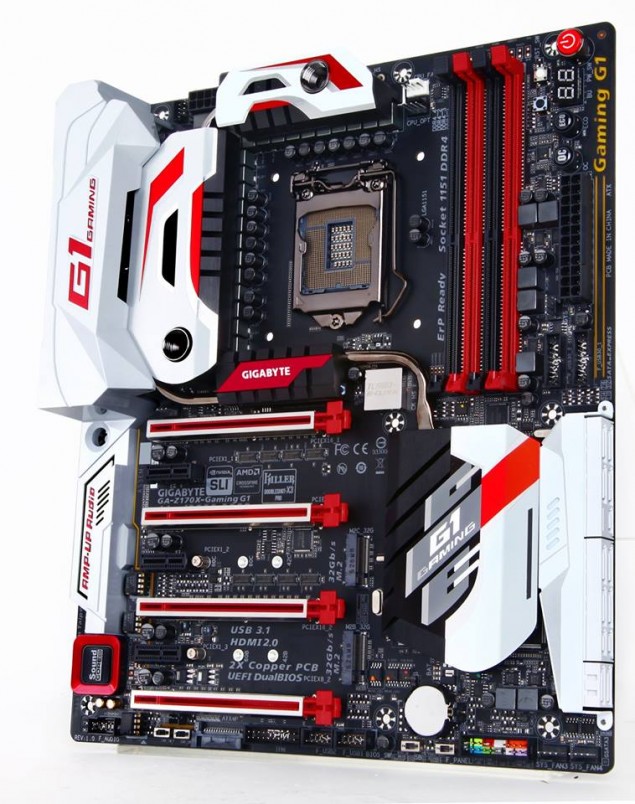 The three Gaming G1 motherboards shown off by Gigabyte include the top-tier GA-Z170X-Gaming G1 followed by the GA-Z170X-Gaming GT and GA-Z170X-Gaming 7. The flagship GA-Z170X-Gaming G1 is a beauty to look at. The motherboard comes in a red, white and black color scheme. It has either a 21 or 22 phase PWM design to keep overclockers engaged in breaking new world records with Skylake chips. The LGA 1151 socket is powered by a 8-Pin power connector and has a large heatsink layout with heatpipe dissipation system and water channel technology to incorporate hybrid cooling through air and liquid supply (G1/4 threaded Fitings). This allows the VRMs and MOSFETs to stay cool under load when voltages are pushed high. Near the socket are four DDR4 DIMMs which can support capacities of up to 64 GB and speeds of 3300 MHz (O.C+). A few buttons for On/Off, Reset and OC switches can be found next to the 24-Pin ATX connector.

The expansion options include four PCI-e 3.0 x16 which are ideally spaced to support 4-Way SLI and Crossfire configurations. There are also three PCI-e 3.0 x1 and two M.2 (32 GB/s) ports. A Turbo B-Clock component is featured right in the center of the board which may boost clock speeds but we don't really know what is the specific purpose or how the chip will operate until the board is launched. For storage, we get an impressive 10 SATA III 6 GB/s ports and three SATA Express ports. These ports are situated right next to two USB 3.0 front panel and two USB 2.0 front panel ports. Dual BIOS switch can be found right below the large PCB heatsink near the storage ports. A PEG connector can also be found to deliver more power to the expansion slots. Other features include a Creative certified Sound Blaster ZxRi 120+dB SNR, HDMI 2.0 connectors, Killer Double Shot Pro X3 network, USB 3.1 Type-C ports  and LED Trace Path with 7 color choices.

The GA-Z170X-Gaming GT and GA-Z170X Gaming 7 on the other hand have a few features toned down to deliver more cost effective products. We get to see three PCI-e 3.0 x16 slots, two M.2 slots on the GT, single M.2 slot on the Gaming 7 and a range of other features on both boards. The Gaming 7 doesn't get any heat pipe or water based cooling solution and the GT only incorporates the heatpipe solution on the VRM heat sinks. Nevertheless, all the boards are impressive and you can take a look at them yourself in the gallery below: