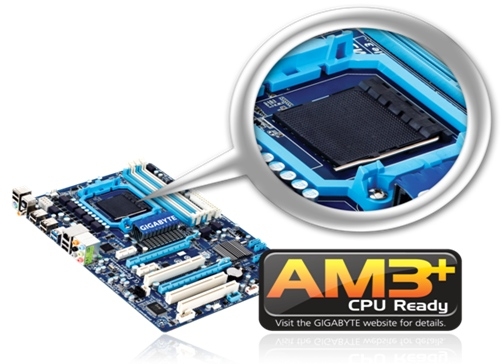 Gigabyte has announced that it'll release a total of 16 new motherboards featuring "Black Socket" (Previously shown at Cebit 2011) which will offer support for AMD's Next Gen 32nm AM3+ CPUs while being based on the current generation AMD 800/700 series chipset.

The new Black Socket will allow to utilize all the performance enhancements that AMD's upcoming AM3+ CPUs have to offer making it great addition in all the motherboards. Also the Black Socket will make it easy to spot the AM3+ CPU support. Also being based on the AMD 800/700 chipset, the black socket will offer full backwards compatibility with AMD's current generation AM3 socket CPUs which will make it easier for users to upgrade to newer CPU's without any hassle. For the complete motherboard list, Go to Source: