Both cards as the title suggest feature 4GB VRAM coupled with a factory overclock and a Triple slot WindForce 3X Cooler. Both cards are based on the GK104 Kepler architecture and details can be seen below: 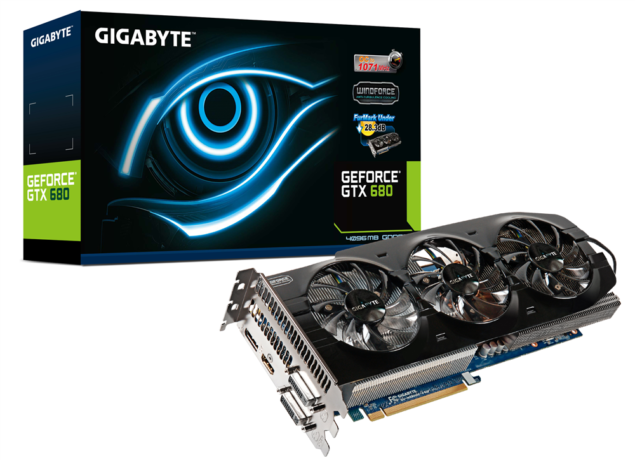 The GV-N680OC-4GD packs 1536 Cuda cores and a 4GB memory clocked at 1071 MHz base, 1137 MHz Boost and 6008 MHz reference frequency for the memory. The card uses the NVIDIA's reference PCB design and requires two 6-Pin connector for power. Display outputs is provided through Dual-DVI, HDMI and a display port.

Equipped with the hefty tri-slot WindForce 3x cooler which makes sure that the card stays under thermal specs even at the most highest overclocks. Three fans directly cool the large internal aluminum chamber providing 450 Watts of cooling power. The model is available for $759-$799 through several retail outlets. 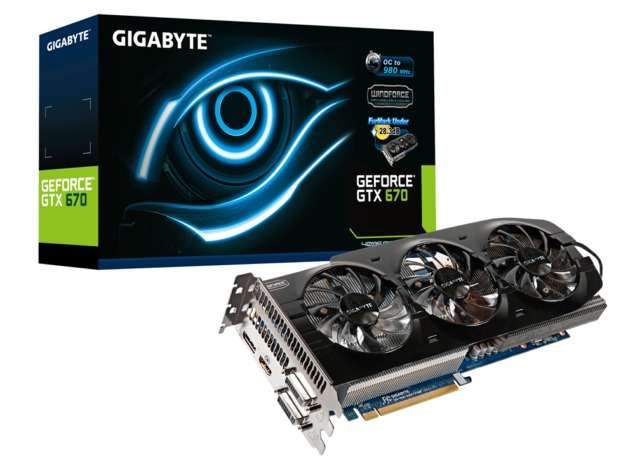 The GV-N670OC-4GD packs 1344 Cuda cores and yet again a 4GB memory operating at 980 MHz base, 1058 MHz boost and 6008 MHz reference frequency for the memory. The card is built off the reference PCB design utilizing the Ultra Durable VGA board design and is powered through dual 6-Pin connectors. Display outputs include Dual-DVI, HDMI and a display port while the card supports 4-Way SLI.

The card is equipped with the tri-slot WindForce 3x cooler which we have already detailed above and would cost above $550 when it launches. Product page here.