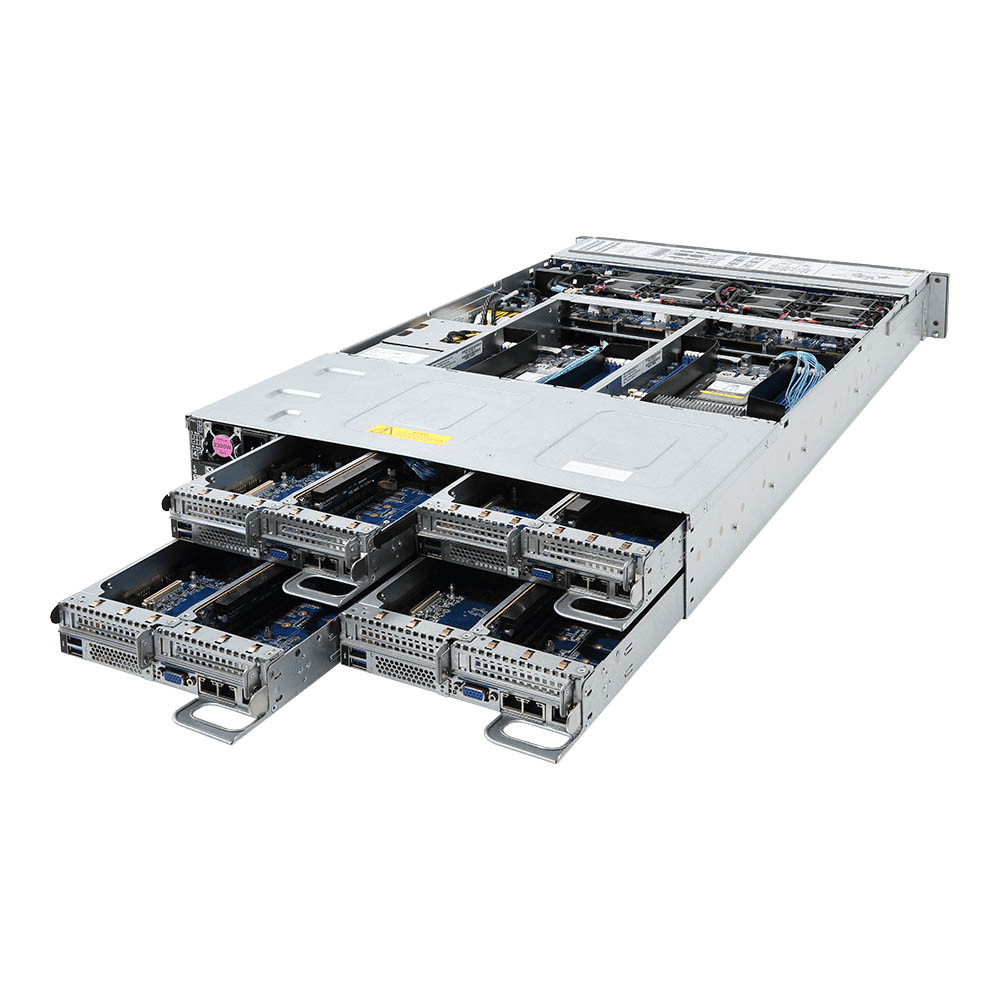 GIGABYTE continues our active development of new AMD EPYC platforms with the release of the 2U 4 Node H261-Z60, the first AMD EPYC variant of our Density Optimized Server Series. The H261-Z60 combines 4 individual hot pluggable sliding node trays into a 2U server box. The node trays slide in and out easily from the rear of the unit.

Each node supports dual AMD EPYC 7000 series processors, with up to 32 cores, 64 threads and 8 channels of memory per CPU. Therefore, each node can feature up to 64 cores and 128 threads of compute power. Memory wise, each socket utilizes EPYC's 8 channels of memory with 1 x DIMM per channel / 8 x DIMMS per socket, for a total capacity of 16 x DIMMS per node (over 2TB of memory supported per each node).

Maximum compute in this system can enable data center footprints to be reduced by up to 50% compared with a standard 1U dual socket server. And GIGABYTE has recently demonstrated that our server design is perfectly optimized for AMD EPYC by achieving one of the top scores of the SPEC CPU 2017 Benchmark for AMD EPYC single socket & dual socket systems.

The H261-Z60 features a system-wide Aspeed CMC (Central Management Controller) and LAN module switch, connecting internally to Aspeed BMCs integrated on each node. This results only in one MLAN connection required for management of all four nodes, resulting in less ToR (Top of Rack) cabling and less ports required on your top of rack switch (only one port instead for four required for remote management of all nodes).

Going a step further, the H261-Z60 also features the ability to create a "ring" connection for management of all servers in a rack. Only two switch connections are needed, while each server is connected to each other in a chain. The ring will not be broken even if one server in the chain is shut down. This can even further reduce cabling and switch port usage for even greater cost savings and management efficiency.

GIGABYTE's H261-Z60 is designed for not only greater compute density but also with better power and cost efficiency in mind. The system architecture features shared cooling and power for the nodes, with a dual fan wall of 8 (4 x 2) easy swap fans and 2 x 2200W redundant PSUs. In addition, the nodes connect directly to the system backplane with GIGABYTE's Direct Board Connection Technology, resulting in less cabling and improved airflow for better cooling efficiency.

GIGABYTE's unrivalled expertise and experience in system design leverages and optimizes AMD EPYC's benefits to offer to our customers a product extremely on-point to meet their needs for maximized compute resources in a limited footprint with excellent expansion choices, management functionality and power & cooling efficiency. All of this would allow 256 cores and 512 threads per 2U enclosure...Which in and of itself is kind of insane.