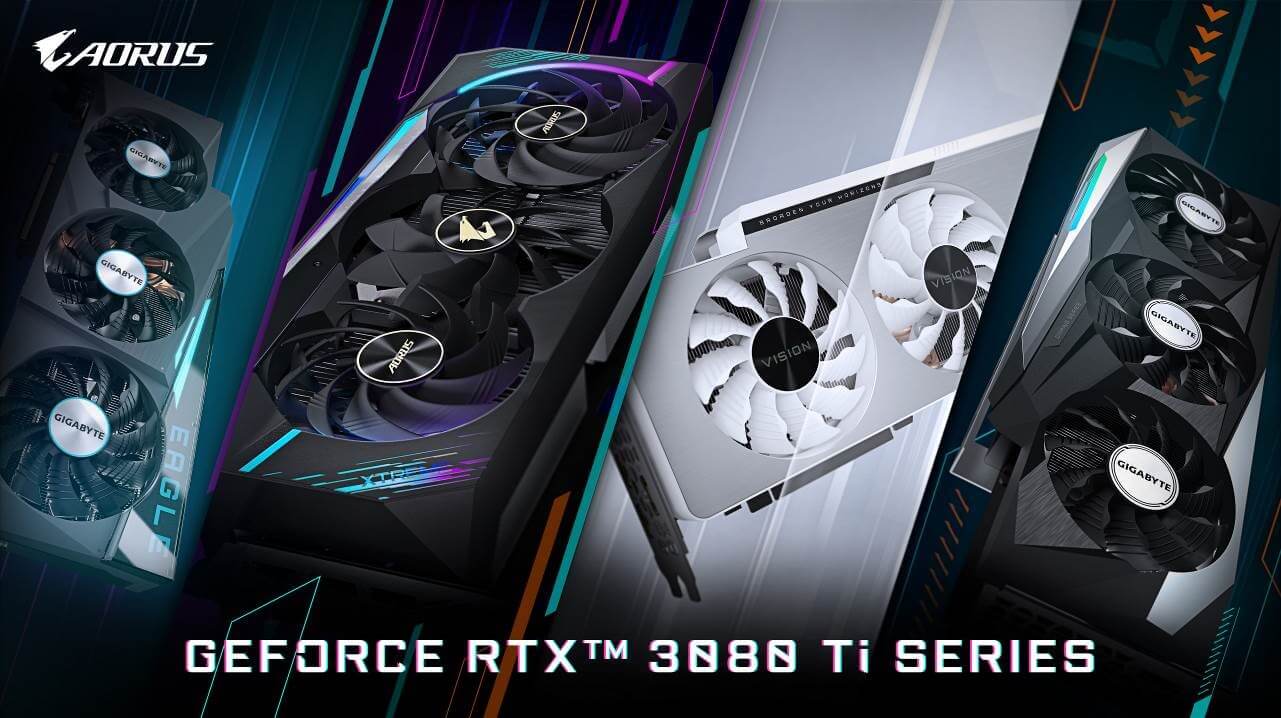 Following the announcement of the NVIDIA GeForce RTX 3080 Ti and RTX 3070 Ti, Gigabyte has announced its lineup of custom models. These include offerings from the AORUS brand, the GAMING series, the VISION series, and the EAGLE series.

Starting off with the flagship model, AORUS has put the NVIDIA GeForce RTX 3080 Ti on water with the Xtreme Waterforce models. The Xtreme Waterforce comes in two offerings, the WB and the regular model. The difference is the non-WB model uses an AIO while the WB model features a preinstalled water block. The cooling is provided through a large copper plate that covers the GPU and the memory which brings heat out through the copper heat pipes. For the AORUS WaterForce, it is cooled using a 240mm radiator which features high-performance fans. There is plenty of RGB on both models which can be controlled using the RGB fusion 2.0 software.

The AORUS Master model has been made available on both the NVIDIA GeForce RTX 3080 Ti and RTX 3070 Ti. The boost clocks are 1770 MHz and 1875 MHz, respectively. The shroud features a triple-fan cooling design which cools the card using a larger copper plate and seven composite heat pipes. The shroud even features an LCD screen that can be customized to display GIFs, images, temps, and more. On top of the LCD, there is plenty of RGB.

The Gigabyte GAMING OC is available for both the NVIDIA GeForce RTX 3080 Ti and RTX 3070 Ti. It takes advantage of the GIGABYTE WINDFORCE 3X cooling system to push the performance on the graphics card. The fans spin in different directions with the middle fan spinning counterclockwise to optimize heat dissipation. The WINDFORCE fans utilize graphene nano lubricant which extends the lifespan of the fans putting them in the ballpark of double ball bearing fans. The RGB lighting on the card can also be adjusted using the RGB Fusion 2.0 software.

The Gigabyte VISION OC is also available for both the NVIDIA GeForce RTX 3080 Ti and RTX 3070 Ti. It is one of the few graphics cards on the market that comes in with the white paint job. The graphics card features a more elegant design with an overall smoother and sleeker look. Even with the different design philosophy, the card makes no compromises in performance taking advantage of the same features the GAMING OC line takes advantage including the GIGABYTE WINDFORCE 3X cooling system.

The most affordable models will come from the EAGLE series which also includes models for both the NVIDIA GeForce RTX 3080 Ti and RTX 3070 Ti. The design of the card was inspired by science-fiction with mechanical materials, a transparent cover, and a bright logo. Just like the other Gigabyte cards, the EAGLE series takes advantage of the Windforce cooling technology and the RGB lighting is fully addressable.