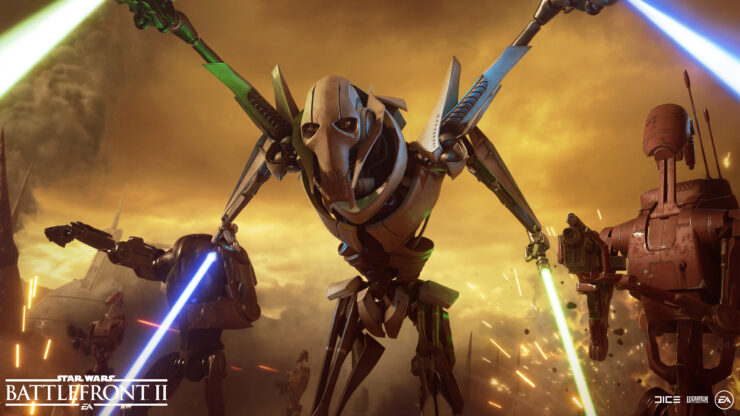 After months of waiting, EA has announced that General Grievous will be arriving in Star Wars Battlefront II next week on October 30.

EA already announced Grievous during this year’s E3 event, but the publisher has now announced the exact date of the Kaleesh cyborg general’s arrival in Battlefront II.

In a post on the game’s official forums, EA posted additional details about Grievous, including a description, abilities, appearances, voice lines and more.

“General Grievous inspired fear across the galaxy as the leader of the Confederacy of Independent Systems’ droid army”, EA writes. “Always the strategist, Grievous made it a habit of escaping the clutches of the pursuing Jedi. Only after countless battles against Obi-Wan Kenobi, did Grievous’ ruthless warmongering for invading worlds and engaging Jedi in combat, come to an end.”

“The drums of conflict are my beating heart. The fire of conquest rages through my veins. Strong, young lungs breathe in air laden with enemies turned into ashes. It is here that I thrive. I have toppled nations. I have slain kings. I have murdered legends. My name has been feared by warriors... and cursed by widows.” – General Grievous, The Clone Wars: The Dreams of General Grievous

General Grievous focuses on a target in front of him and rushes to them while doing a stab motion with all 4 of his lightsabers.

General Grievous goes down on all 6 limbs and rushes forward, damaging and pushing away any enemies in his path.

General Grievous spins two lightsabers over his head and can advance on his enemies. While this is active, Grievous blocks any frontal attacks and damages enemies in front of him.

There are a number of iconic voice lines that have been added for General Grievous, as well as some entirely new ones. A small selection of these are below:

If General Grievous wasn’t feared enough, then his Battle Damaged visage will certainly invoke an additional sense of fear.

The Battle Damaged appearance will be classified as rare and cost 20,000 credits or 500 crystals.

General Grievous will cost 35,000 credits and will not be purchasable for crystals. Remember to do your daily challenges and to log in each day for your daily crate reward!

Star Wars Battlefront II is available now for PC, PlayStation 4 and Xbox One.