A few weeks ago, Microsoft launched Gears of War Ultimate Edition for the PC which was an updated version of the original title released back in 2006. The updated Ultimate Edition was developed on the DirectX 12 API and users were expecting to see some good performance and detail updates from the title but at launch, the game was infested with many PC related bugs and issues. Today, Microsoft has released an updated patch which fixes most of the performance issues and Overclock3d has put in some effort to benchmark the updated version of Gears of War with several modern graphics cards. 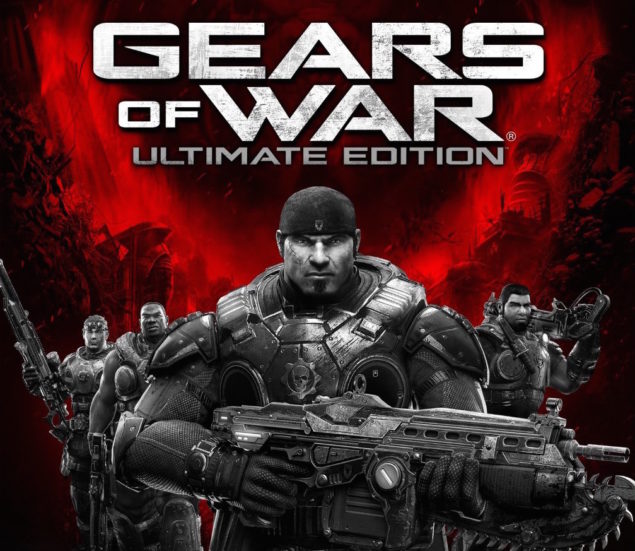 So what was the reason behind the mess that led Microsoft and the developer (The Coalition) to issue a patch at such a short notice. We are talking about a major patch just a few weeks after the launch of the title and the developer could have easily delayed their game if they knew that bugs existed inside their game. The game was launched on PC last month and exclusively for Windows 10. While there were plenty of bugs that are addressed in the latest patch, the most prominent issue was the poor performance specific to Radeon graphics cards. The bug fixes included in the latest patch are listed below (Full List here):

The latest benchmarks are now published by Overclock3D and show the AMD cards performing just as great as their GeForce counterparts. The Radeon R9 Fury X performs close to the GeForce GTX 980 Ti at the highest in-game settings while the Radeon R9 380 now performs better than the GeForce GTX 960 to which it was loosing the battle just a few weeks ago. This sudden increase in performance raises many questions against Microsoft as to why they rushed the game in the first place when they could have delayed the game for a few weeks and optimized it further for not only AMD cards but PC in general. You can see the benchmarks below from OC3D:

Not only is the performance fixed but the game now runs with much less issues than its launch day release. OC3D state that the game has been completely fixed which means that they faced no issues testing the title which is good news for gamers who had bought the game from Windows store (where the game is sold on Windows 10 systems exclusively).

The initial benchmarks of the game showed that Radeon cards were generally behind their GeForce counterpart and in some cases, the GeForce cards were up to 10 FPS ahead of equally comparable Radeon cards. There was no reason given by either the publisher or developer on such a big difference in performance seen on the GPUs but a few people suggested that it might have something to do with NVIDIA's Gameworks implementation that might have led to the poor performance of Radeon cards.

First up, we have the PhysX issue where some users managed to find NVIDIA's PhysX listed in one of the games INI file. NVIDIA's PhysX is part of their Gameworks library and simulates physics rendering through either CPU (Software PhysX) or by NVIDIA's CUDA based graphics cards (Hardware PhysX). Extremetech managed to run a detailed analysis of PhysX in Gears of War and they concluded that even after forcing PhysX through NVIDIA's control panel to run on and NVIDIA graphics card.

When tested, the system reported no performance difference when PhysX processing was offloaded to the CPU and in Extremetech's case, a Core i7 processor (Haswell-E). In no way is the game using PhysX on either NVIDIA or AMD based systems, so to say that PhysX might be the reason behind AMD's dismal performance in Gears of War prior to patch is incorrect especially when the same INI file exists after the latest patch yet AMD gets improved performance in Gears of War.

The second issue which was widely reported as a Gameworks related issue was the visual corruption bug which was encountered when the NVIDIA specific HBAO+ effect was turned on, on AMD cards. Now first things first, NVIDIA's HBAO+ is also part of their Gameworks library and is specifically built for GeForce cards. AMD's own solution for ambient occlusion is HDAO and SSAO. Sure many games don't feature support for both but that and while HBAO+ is designed to run best on NVIDIA cards, there's no one stopping AMD users from using HBAO+ as there have been a constant flow of titles that have utilized HBAO+ and never once was there such an issue as encountered in Gears of Wars Ultimate Edition. 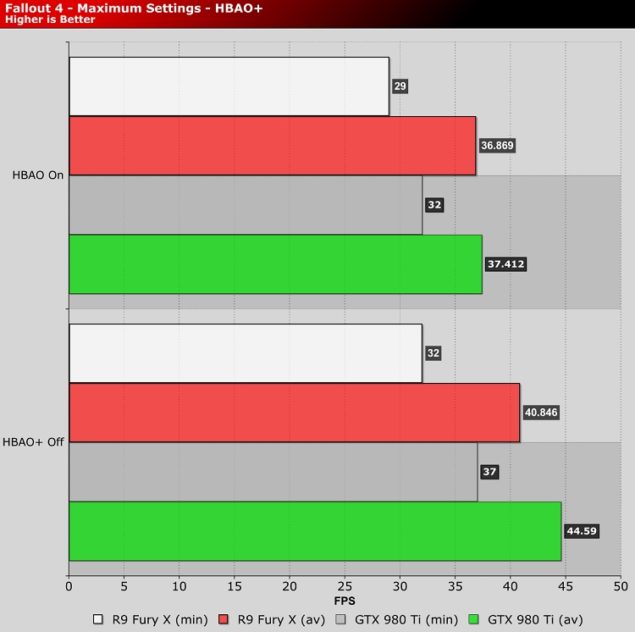 The latest game to feature HBAO+ was Fallout 4 which when turned out impacted FPS on AMD and NVIDIA cards in the same way. There were many titles before Gears of War Ultimate Edition where AMD users could use HBAO+ and didn't face any visual corruption. In fact, Microsoft's handling of the visual corruption bug on AMD's card where the disabled the feature as a whole could point out that it was the rushed up launch that caused the issues rather than being a Gameworks specific fault.

While testing the game, we were also quite surprised to note that the previous GCN based cards such as the R9 290X delivered better performance than the Fury X at 1440P and 4K before the patch. AMD not having drivers for their Radeon R9 Fury and 380 series cards (Both GCN 3.0) at the launch of the title could be the issue behind that but they had mostly fixed the performance issue by delivering up to 60% increase in total performance with their Crimson 16.3 drivers. The point to mention is that these Gameworks features still exist with the latest patch in Gears of War Ultimate Edition but AMD's performance has been fixed completely. Reports about the issues being a fault of Gameworks at the launch of the game could be put to rest now. 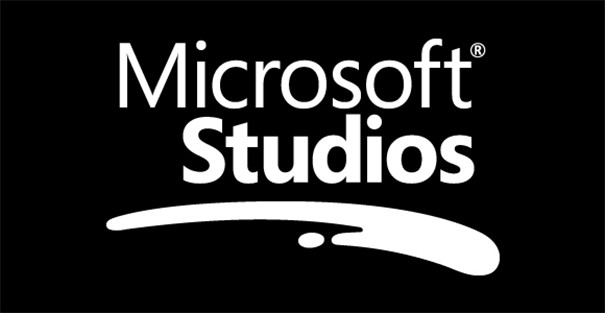 To conclude this article, we should first state that Microsoft has fixed the performance of their game with some bugs still present but was it supposed to be this way from the start? Gears of War Ultimate Edition was Microsoft's way of giving back PC community some love but it turned out to be the complete opposite. There were issues on not just AMD but also NVIDIA cards. The game was one of the buggiest launches of 2016 and Microsoft should have had tested the game before shipping it to consumers but that wasn't the case.

All in all, it was a bad show from Microsoft and not the way PC gamers are won in their hearts. Microsoft is soon to release another title exclusively for Windows 10 PCs called Forza Apex which is a Free to Play title based on the same Forza DNA as available on the Xbox One console. Microsoft should make sure that they don't repeat the mistakes they made handling Gears of War Ultimate Edition.