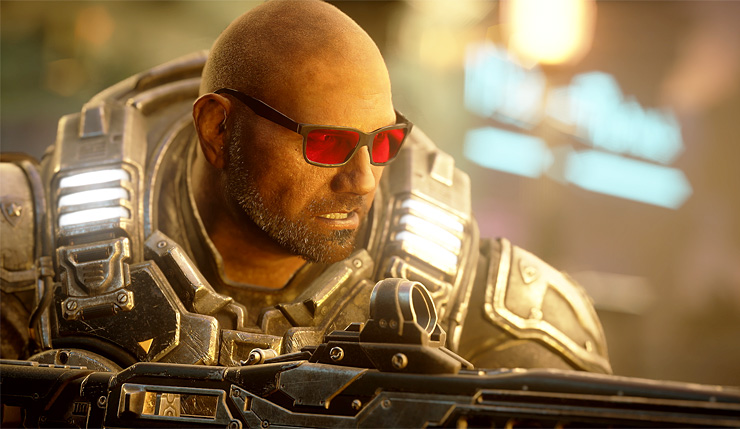 Gears 5 drops this week for those who pre-ordered or are planning to play via Xbox Game Pass Ultimate, and Microsoft is drumming up some last-minute hype with some new footage, a cool cameo, and more! First up, the footage, with provides a meaty 15-minute look at the second act of Gears 5’s single-player campaign. We get to see Kait blasting baddies with big guns and a badass mech, before things take a somewhat unexpected turn. Check it all out, below.

Note: The following footage contains Gears 5 spoilers. It’s only the second mission of the game, but you shouldn’t watch if you want to go in completely fresh!

Next up, it’s been announced that former WWE Champion and Guardians of the Galaxy star Dave Bautista (aka Batista) will be a Gears 5 multiplayer character.

It’s about damn time. Play as me in #Gears5 starting Sept 15 after @WWE Clash of Champions. @XBox @GearsofWar #DreamChaser pic.twitter.com/bCU4ZIjdw1

Bautista is a popular fan choice to play Marcus Fenix in the upcoming Gears of War movie, and while Microsoft hasn’t outright confirmed the casting, they are hinting pretty strongly it’s happening. So yeah, maybe this Gears 5 cameo will lead to bigger things. Here’s what The Coalition studio head Rod Fergusson had to say about Bautista coming to the game…

Adding Batista to Gears 5, we started with the fantasy of “Batista as Marcus,” putting Batista into Marcus’ armor, and starting with Marcus’ script. Then we added elements of “The Animal” Batista into his voice performance and onto his look by adding his signature Hollywood shades to his character.  Batista was great in the booth and I can’t wait for Gears and Batista fans alike to stomp some Swarm as The Animal.

Bautista will be available to everybody who plays Gears 5 between September 15 and October 28.

Finally, ultra-popular streamer Ninja (who recently defected from Twitch to Mixer) will be exclusively streaming the Gears 5 campaign, starting tonight!

Partnering with Microsoft to bring you the first ever Gears of war 5 campaign playthrough tonight at 5 central! Check out the Trailer here and I'll see you tonight at https://t.co/d21XV8MWPv >:) https://t.co/7voWqAxgc0 pic.twitter.com/6TJZmUYcQ3