Despite the fact that the name Galaxy TabPro S sounds quite unusual, Samsung has announced a competitor to Microsoft’s Surface Pro 4, at least for the base model of the latter. Let us check out the hardware specifications of the newly announced slate. 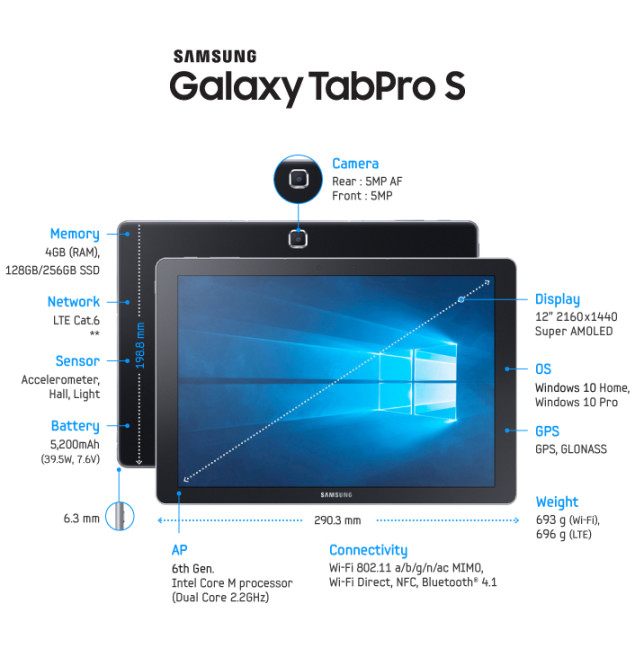 Let us dive into the hardware; Galaxy TabPro S features a large 12 inch Super AMOLED display, which is a form of display that we have come to accept and appreciate in the company’s high-end mobile products. Instead of incorporating its own hardware, with the latest SoC being Exynos 8890, Samsung teamed up with Intel and incorporated a Skylake Core M processor with a clock speed of 2.2GHz. We are not so sure about the aforementioned speed, but we are guessing that this is the maximum speed that can be achieved from the chip courtesy of Intel’s Turbo Boost technology.

As for the operating system, Galaxy TabPro S will be running in either of the two platforms:

The resolution of the 12 inch slate measures in at 2160 by 1440 pixels and there is 4GB of RAM present inside the machine. The tablet will be available in two SSD storage models; a 128GB one and a 256GB one. We will have to wait for pricing details later on in the year, but the slate is looking to be quite impressive so far. Samsung has not mentioned that if it will give away any free accessories (the Bluetooth pen comes free though), but from the looks of it, the company is going down the same road as Microsoft, which we are not sure is a good move, because then it would not exactly turn out to be a laptop substitute if you are going to have to spend extra on something like a smart keyboard cover.

Regardless, there is going to be an LTE modem present in another variant, if you feel the need to have a second set of connectivity options apart from the 802.11ac Wi-Fi adapter, Bluetooth 4.1 chip and NFC. There is also a 5MP autofocus shooter present at the rear side, while the same number of megapixels can be found at the front side of the slate. As for battery life, Samsung has stated that the 5,200mAh cell can deliver up to 10.5 hours of normal use. As for the dimensions, they have been listed below:

We will be providing comparisons with Microsoft’s Surface Pro 4 but so far, we want to know if you prefer this tablet over Microsoft’s offering? Tell us your thoughts in the polls below.