After a brief pause, Samsung's Galaxy S10 lineup is once again surfacing on the rumor mill. We've seen big features reported for the lineup, as Samsung appears to be intent at making a big comeback with the lineup. Now, the Galaxy S10+ has passed an important stage in its development in Russia. Head over below for the details.

Right now, it's expected that Samsung will launch four Galaxy S10 smartphones next year. While this sounds a bit far-fetched for our comfort, one of the reports making this claim is from the Wall Street Journal. According to the report, Samsung is preparing a special Galaxy S10 gadget, that will not only mark the lineup's tenth anniversary but also feature 5G and four rear camera sensors.

Now, the SMG975F and SMG975X have passed through the Rosaccredit. Like the US' FCC and China's MIIT, the Rosaccredit is a certification agency for the Eastern European/Asian country. It's expected that the SM-G97X is the internal codename for Samsung's Galaxy S10 lineup. Additionally, the certification also lists a dual-SIM variant of the Galaxy S10. This gadget is dubbed as 'DS-SMG975'. 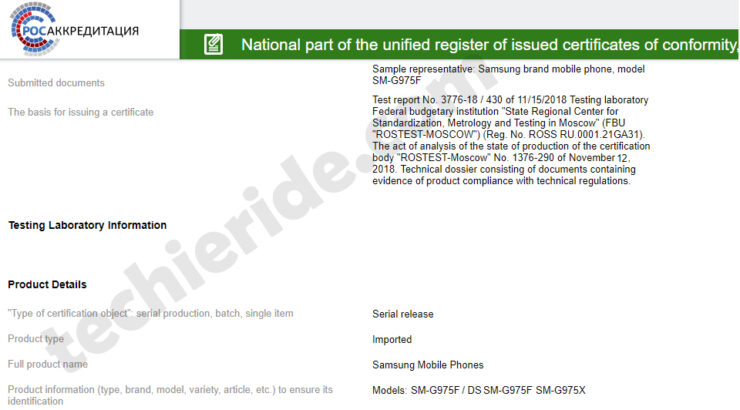 Additionally, we believe that the SM-G975 refers to the 6.4" Galaxy S10+, courtesy of a report from notorious tipster Ice_Universe. However, Ice_Universe shared the report at a time when there were no rumors for the aforementioned fourth S10 variant. Given the 'exact match' nature of this information, it's likely that today's device is indeed the Galaxy S10+.

The 'regular' Galaxy S10+ is rumored to feature three rear cameras, an Infinity-O display and ultrasonic fingerprint recognition. Samsung will also launch a special ceramic variant of the device suggests a report. Samsung's mythical 5G enabled Galaxy S10 variant will also feature a screen larger than 6.4", making it the largest S smartphone in the company's history.