Galaxy Note 9 Teardown Bears a Massive Copper Heatpipe, but a $1,000 Price Tag Doesn’t Make It Any Easier to Repair 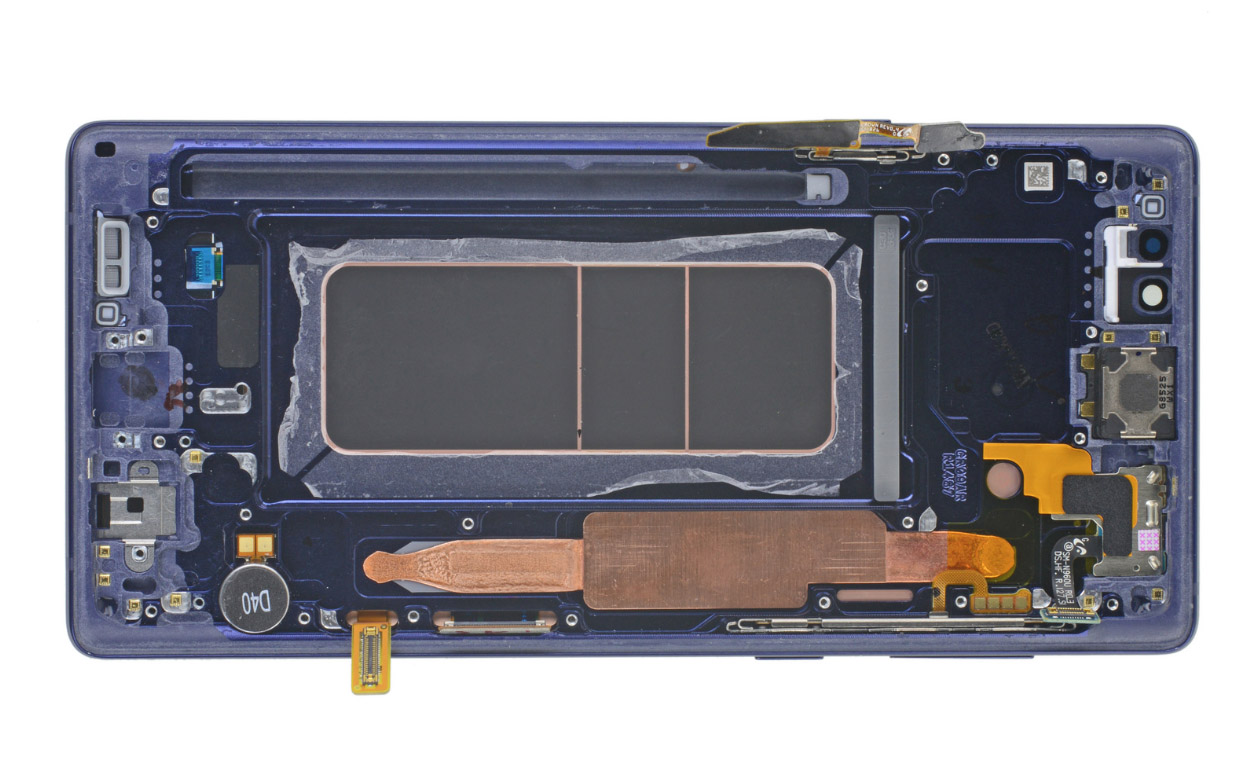 The team at iFixit has taken apart the new Samsung Galaxy Note 9 and the teardown has revealed that the internals of the phone are similar to that of its predecessor’s. The phone is a little shorter and wider than the Galaxy Note 8, with an additional 0.1 inch of screen estate. At 8.8mm, the display is a little thicker than the 8.6mm display of the Note 8.

The fingerprint sensor has been relocated to a more convenient location: below the rear camera. The flex cable location is less susceptible to accidental damage. However, the short cable makes the reassembly a little difficult. iFixit has also found that the Galaxy Note 9 has a 15.4Wh battery which measures 87.7mm × 41.5mm x 6mm. Coming to one of the reasons why the Note 9 is also essentially a gaming smartphone; the massive heat pipe.

The addition of this large cooling solution is extremely beneficial; it has more surface area than the previous generations and it provides better cooling. The heat piping will allow the chipset’s processor and GPU to run at their maximum clock speeds for a significantly longer period. 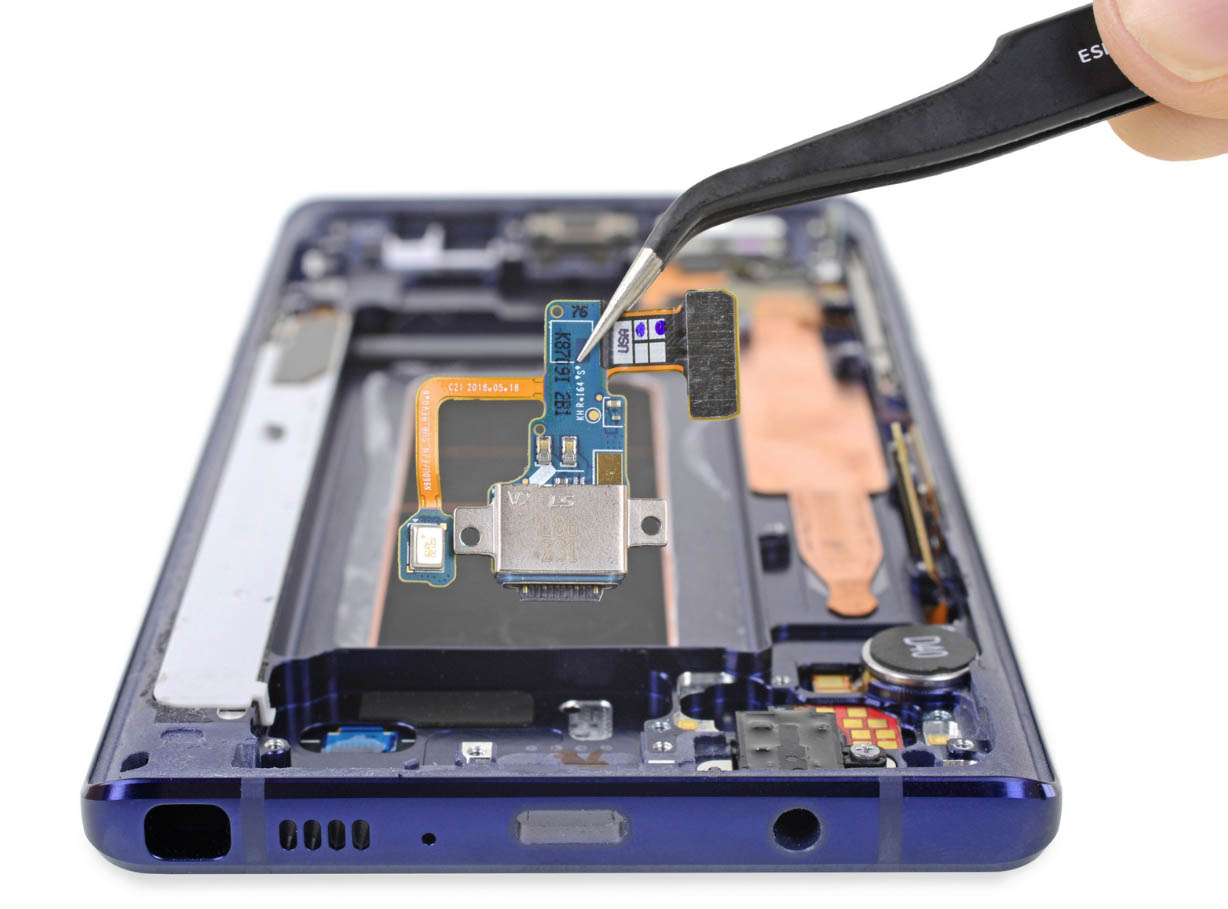 The most unique addition to the flagship is also the most difficult to take apart and that is the S Pen. The teardown team managed to locate a DA14580 Dialog Semiconductor Bluetooth Smart SoC and a K8373 Seiko Instruments supercapacitor inside.

iFixit believes that the supercapacitor fuels the Bluetooth radio, which is utilized only for the single button. Other stylus functions are not dependent on built-in power to operate. The firm also speculated that the sensing coils near the tip charge the S Pen. They also found a grey pad near the coil where the stylus is kept and think that it is an inductive charging pad. 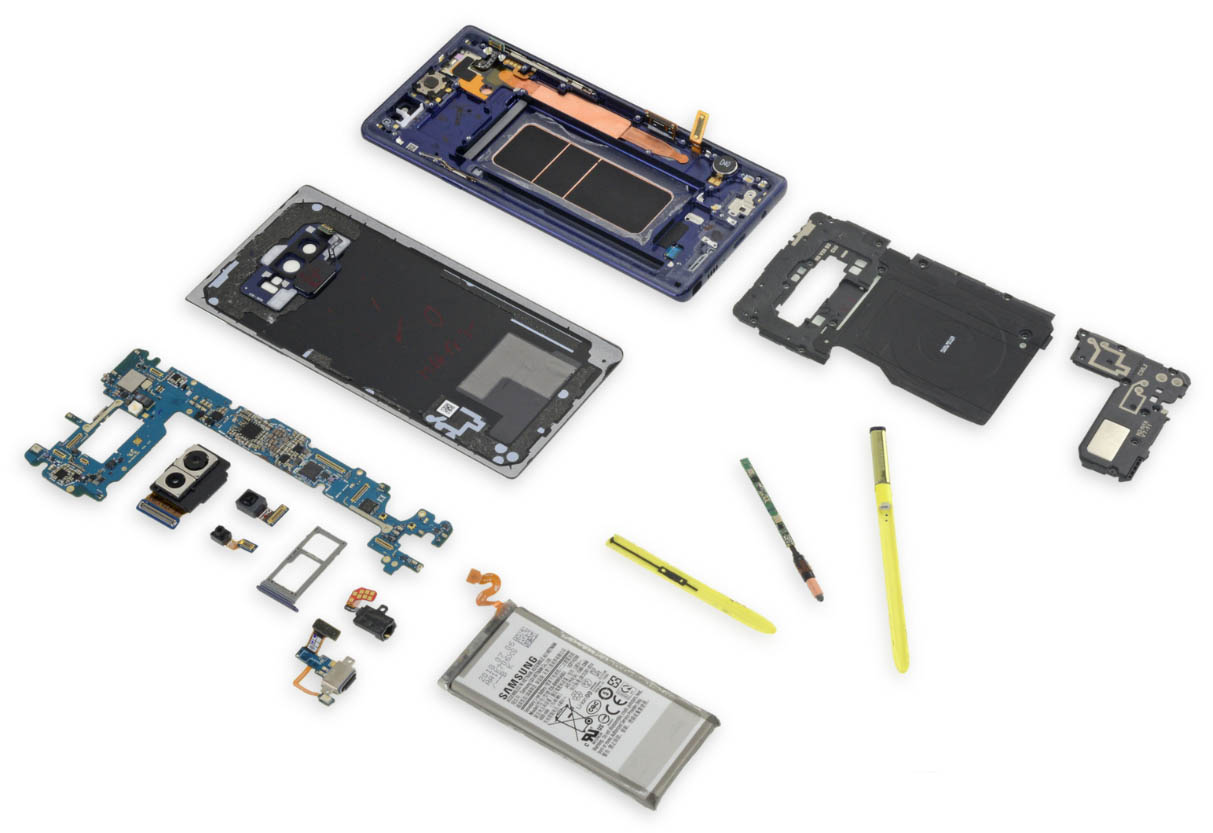 All in all, these are just incremental changes over the Note 8, and the largest improvement has been seen in the battery capacity. Still, these incremental changes helped Samsung make the best Galaxy Note flagship ever, even if it means that it will be difficult to repair the device on your own.

This Note's components are more modular than ever, thanks to subtle changes to the USB-C hardware, headphone jack, and the S Pen dock's flex cable.

The only screws used are standard Phillips screws.

You can replace the battery if you're determined—two extremely stubborn glue barriers make it unnecessarily difficult.

To service any component you must first painstakingly un-glue (and later re-glue) the glass rear panel.