The Samsung Galaxy Note 4 has been with us for quite a while now. As we know, the device comes with two variants separated on SoC basis. The Samsung Galaxy Note 4 comes in two variants with the Qualcomm Snapdragon 805 on one and Samsung's in-house Exynos 7 Octa on the other. The Snapdragon 805 is probably the last crown jewel in the ARMv7 32 bit architecture since things are now moving to the 64 bit side of things in the mobile hardware industry, with Apple already having taken the lead sometime back and the Nexus 9 following suit.

The Exynos 7 Octa on the other hand is vastly different from the Snapdragon 805 in terms of architecture. Compared to the quad core architecture of the 805, the Exynos 7 Octa comes with two sets of quad ARM Cortex A53 and Cortex A57 cores on board, with CPU loads alternating between the two, or utilizing them completely depending on the computing power required. But that's not the only thing that sets both the tablets apart. So today, we're going to take a look at things in details and see which variant does end up offering up the best value for your buck. If you want to see what makes both the versions tick in detail, read the entire post. If however, if you just want to see which device comes on top, take a look at the conclusion at the bottom of this post.

The Exynos 7 Octa Vs. The Snapdragon 805. Some Hard Facts.

The Snapdragon 805, when compared to its predecessor, the 801 sees modest improvements in terms of CPU performance. It is based on the ARMv7, Krait 400 CPU architecture which is ARM's successor to Scorpion CPUs and is in function since 2012. The Krait 450 in the Snapdragon 850 is a minimal upgrade to the Krait 400 found in the 801.

Notable features of the Krait series, or the Krait 450 in particular include 2 MB of L2 cache, 3 way decode and 4 way out of order command execution, which basically means that the Snapdragon 805 will be time efficient when executing commands by executing them in the order of input data available, rather than the order in which commands have been received. The Krait series also executes more than one command per cycle through simultaneous allocation of instructions to various CPU parts. A feature on the Snapdragon 805 which will also be discussed on the Exynos 7 Octa is ARM's MPE (Media Processing Engine) which provides for effective acceleration of media.

Coming towards the Exynos 7 Octa, Samsung's in house offering is no underdog when it comes to hardcore CPU and graphics performance. Featuring four Cortex A53 and four Cortex A57 cores, the Exynos 7 Octa is based on an all new ARMv8, 64 bit architecture. What this essentially means is that even though the higher clocked cores of the Exynos 7 (A57 cores with a frequency of 1.9 GHz) have an overall lower frequency when compared to the 2.7 GHz per core the Snapdragon 805 offers, the Exynos 7 still manages to take the ball when it comes to performance.

In areas of RAM and power consumption, the comparison between the two SoCs results in no clear winner. The Exynos 7 Octa with its 20 nm HKMG manufacturing process is more power efficient when it comes to the Snapdragon 805, which is manufactured on the 28 nm HPM process. The memory controllers for the Exynos 7 Octa features 825 MHz of dual channel 32 bit LPDDR3 with a GBPs value of 13.2. The Snapdragon 805 on the other hand features a slightly lower clocked 800 Mhz of 64 bit dual channel 64 bit LPDDR3 memory with a higher GBPs value of 25.6 GBPs. ARMv8 also features branch predication for advanced instruction management and advanced SIMD which is similar in nature to the Snapdragon 805's MPE mentioned above but also uses 128 bit registers for better media processing.

The GPU for the Exynos 7 Octa is the latest in ARM's Mali range of GPUs with a total core count of 16 cores on board. When it comes to frequency, both the Adreno 420 and the Mali T760 perform toe to toe with the maximum frequency for the T760 being 600 Mhz as well. The Mali T670 comes out on top in pixels rendered, with a score of 9.6 GP/s. For floating point scores, the Mali T760 has a score of 20.4 GFLOPS per core.

Compared to this, the Adreno 420 has total GFLOP scores ranging between 330-388. While these might sound complicated at first, a benchmark analysis for both the GPUs helps put their relative performance in a much better perspective. The Mali T760 also supports OpenGL ES 3.1, OpenCL 1.2 and DirectX 11.1.

Now that we've seen what makes the Exynos 7 Octa and the Snapdragon 805 different, its time to see how these stats are transformed into real life performance. We've been able to get our hands on some extensive CPU, browser and GPU benchmarks of both the variants of the Galaxy Note 4, so lets take a look at these below.

Coming towards the GPUs on the Galaxy Note 4, it is here we see the true power of the Adreno 420 GPU upgrade found on the Snapdragon 805. As mentioned above, the Adreno 420 features as much as 40% increased GPU performance over its predecessor, the Adreno 330. ARM's Mali T760 really is no match for its Qualcomm counterpart. 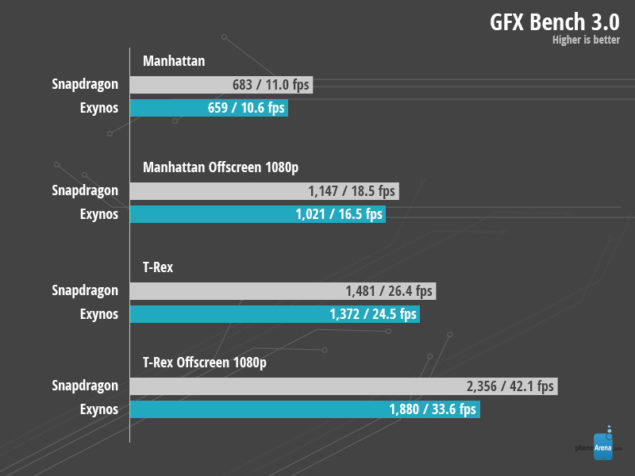 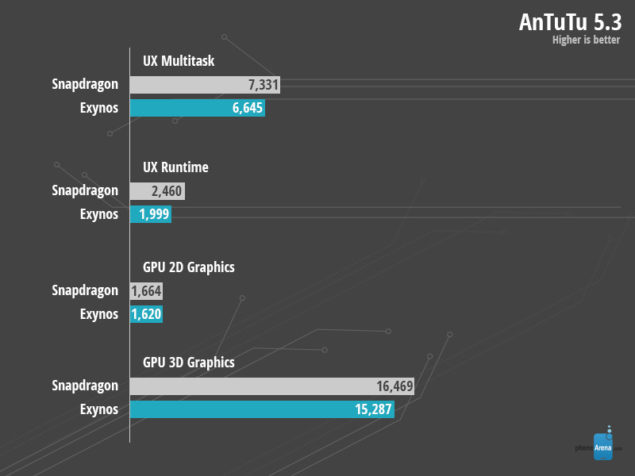 Another good indicator of a device's performance when it comes to benchmarks are browser benchmarks in addition to overall CPU benchmarks. Browser benchmarks for the Exynos and Snapdragon Galaxy Note 4 show mixed results, with the Exynos 7 Octa once again taking the lead in multi-core performance in general and also in several other aspects including memory, system and overall. But once again, when it comes to graphics, there is no beating the Adreno 420, as can be seen in the benches below. 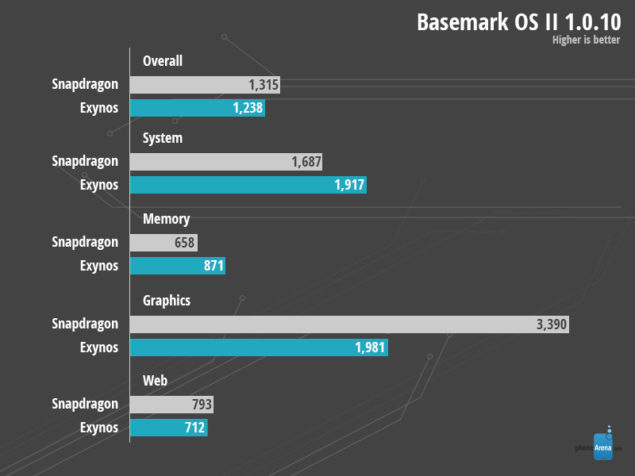 Now for the moment of truth. After looking in great detail at both the Exynos 7 Octa and the Snapdragon 805, and their relative performance on the Samsung Galaxy Note 4, its time to answer our original question. Which device is better suited to your needs and ends up delivering higher value for your money? Well, like all questions related to gadgets and devices, it pretty much comes down to what your requirements are.

If you want your Samsung Galaxy Note 4 for raw computing power and processor resources, your choice should be the Exynos 7 Octa version of the tablet, hands down. Not only is Samsung's in house SoC 64 bit, but it also end up delivering better computing when it comes to handling large amounts of loads. If, however, you need your tablet for gaming and other multimedia purposes, the Snapdragon 805 Galaxy Note 4 is the one for you, with its superior graphics courtesy of the Adreno 420. And if you're a photography lover, stay tuned for our second part on the Galaxy Note 4 analysis, which will cover the device's photographic capabilities in detail. Cheers!