For a while, it's been rumored that the Samsung Galaxy Note 10 will feature a new Exynos processor. Samsung decided to take it slow with upgrading its processing nodes from 10nm to 7nm, by choosing to launch the Exynos 9820 with an intermediary 8nm process. Now, it's expected by several quarters that the Galaxy Note 10 will become Samsung's first gadget to feature the Exynos 9825 -  a processor that's manufactured on the company's 7nm FinFET process. Today we've got a benchmark for this processor powering the Note 10 so take a look below for more details.

Samsung's Exynos 9825 will be manufactured on the company's 7nm FinFET process using Extreme Ultraviolet Lithography (EUV). EUV marks the natural progression in semiconductor fabrication as circuits start to go beyond what traditional DUV based processes can offer. To that end, TSMC too will introduce EUV based processors this year, marketed under Apple's An and Huawei's Kirin branding.

The Taiwanese fab has a natural edge over Samsung LSI as the former's chips generally make it to the market earlier owing to Apple and Huawei's launch cycles. Now, should it launch the Exynos 9825 on the Galaxy Note 10, Samsung will breathe right down TSMC, Huawei and Apple's necks this year. Such a potential move naturally raises questions about the Exynos 9825's performance, and we've got a benchmark that looks to answer just this. 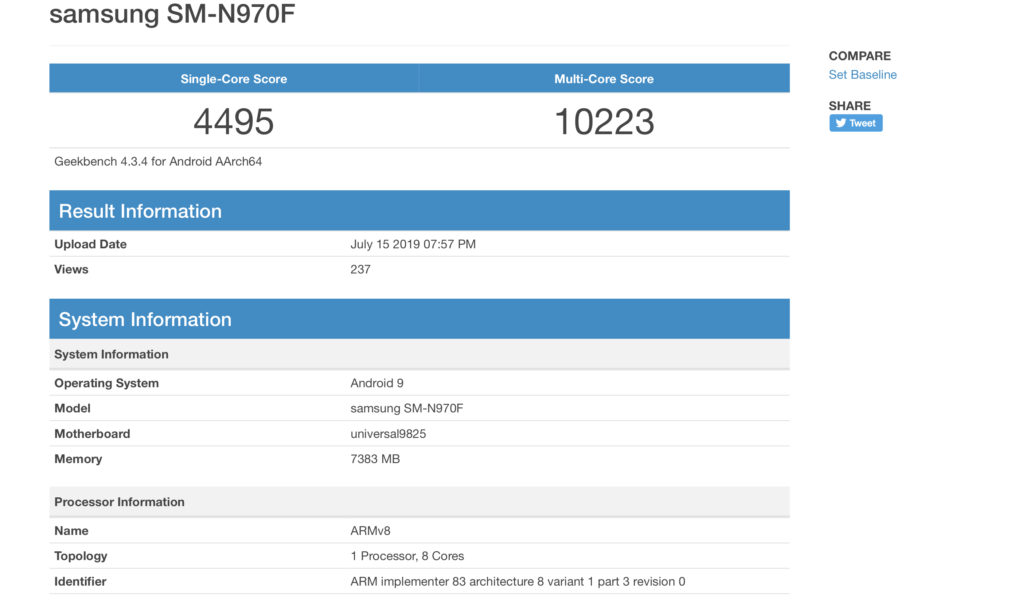 Today's benchmark that has surfaced on GeekBench doesn't paint an impressive picture for the Galaxy Note 10. It shows the device running on approximately 8GB RAM achieve a 4495 single and 10,223 multi-core score. Additionally, the base frequency of the universal9825 is 1.96GHz, which is lower than what the chip should achieve under peak workloads. Apple's A12, for example, clocks at 2.49GHz to achieve a 4789 single and 11,175 multi-core score on the iPhone XS Max.

Since this is early run of the Galaxy Note 10, we'd give the device more time before reaching final conclusions from today's score. Theoretically, Samsung's 7nm Exynos 9825 should be at par with Apple's upcoming A13 processor for the 2019 iPhone lineup. However, real-world use cases will differ depending on the chips' microarchitectures. Thoughts? Let us know what you think in the comments section below and stay tuned. We'll keep you updated on the latest.