Samsung's Galaxy Note 10 is due to be launched on the 7th of August. By the looks of things so far, it's highly likely that we'll get three different Note variants this year. Two of these will be the standard gadgets that are segregated on the basis of their screen size. The third, will be a 5G variant that will be aimed at Samsung's home country South Korea. Today we've got a benchmark for the 5G Galaxy Note 10, so head over below for more details.

Benchmark leaks for the international variants of Samsung's upcoming Galaxy Note 10 phablets aren't rare. There's a whole bunch of scores present on GeekBench that lay out in detail about what to expect from Samsung's mythical Exynos 9825 that's rumored to power the Note 10 lineup's internatonal variants.

However, so far we've only been able to lay our hands on the 4G variants of the phablet. This changes today as a fresh score on GeekBench sheds light on the Note 10's 5G variant powered by Samsung's Exynos 9825. Since this device's chipset is the same as for the 4G variants, we see little changes from previous scores. Nevertheless, it provides a reasonable approximation of what to expect from the device that is due for launch next month. 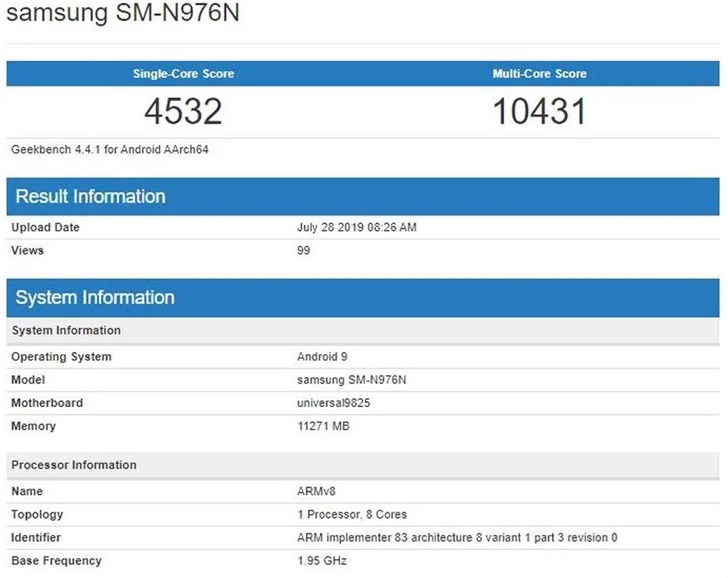 The 5G Galaxy Note 10 scores 4532 points in single and 10431 points in GeekBench's multi-core tests. These put it right at the top of the Android flagship food chain, and future users of the gadget should be able to comfortably run all types of tasks on their phablet. The Exynos 9825 is clocked at 1.95GHz in today's test, and the Samsung Galaxy Note 10 is running on 12GB of RAM. Samsung is expected to offer users a hefty 256GB as starting storage for the upcoming phablets; a decision that is likely to receive mixed reaction from the market.

The Galaxy Note 10 lineup will significantly overhaul its design over the Note 9. They'll feature a brand new display and a new, vertically stacked rear camera setup. Samsung will also improve the Note 10's S-Pen, and if we're lucky, then the US variants of the phablets will run on Qualcomm's Snapdragon 855 Plus. Thoughts? Let us know what you think in the comments section below and stay tuned. We'll keep you updated on the latest.