Certainly there is a wrong way to approach the Steam Early Access program. We've all either heard stories or unfortunately have first-hand experience with games or projects that never seem to come to fruition and completely disappoint us or of those projects that even once they are released seem like they are just in a perpetual state of beta testing. H1Z1 comes to mind. 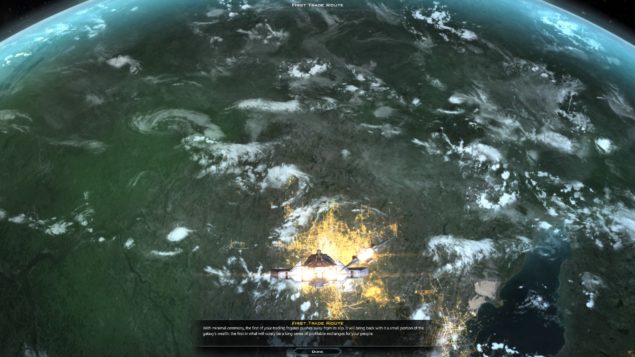 Stardock Corporation, however, seems to have a winning formula.

Not all developers have the resources to truly take on a big project, or any project, especially in this age of independent development and the popularity of crowd funding. Sometimes we get a little excited about our project and over promise. Significantly.

With Galactic Civilizations III, they're showing the world just what the Steam Early Access program should be for: As a proper beta testing platform. 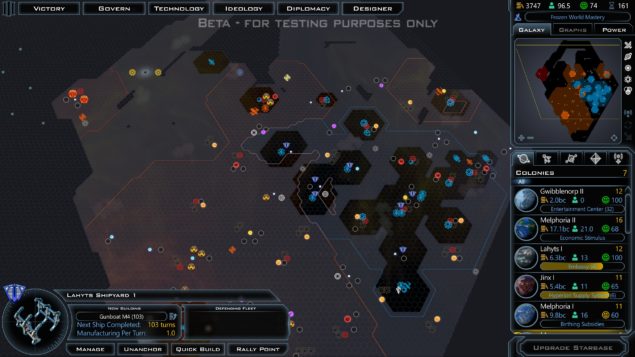 Before we get into this I have to stress that this is still a beta, no matter how complete it may look. While playing this you may experience things that either aren’t intended or are bugs that will likely be fixed in the future. But I do highly suggest you check this out, if you like 4X strategy games.

One of the most notable changes from the previous installments is the mandatory 64-bit system requirement. This is done to allow for the maximum and most sophisticated game that you can play. Galactic Civilization III would be limited otherwise, they say.

They’ve added a ship customization area where you can design your own ship. It’s certainly not a CAD program by any means, but the level of detail and number of options that you can change on any given ship, or on the ones you create, is still rather fascinating. It’s more than just changing the loadout of the weapons. Add different superstructures and other apparatus to make it truly original. 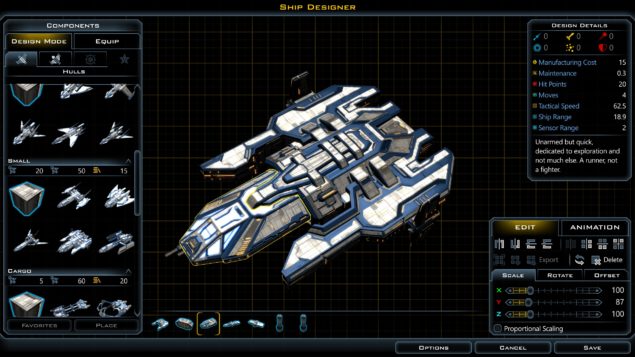 It’s a dynamically story driven game. It forces you to make decisions that not only affect you and your little sovereignty’s affairs, but also have a galactic wide impact. The level of diversity with the decisions that you make, and the randomness of the decisions and moves that the computer controlled opponents make really adds to that atmosphere.

But more than that, they’ve added a level of minute control to their diplomacy system that allows for deeper control on how you interact with the other species in the universe. It adds to the sense of scale that is already massive. Planetary management has also been revamped. Planning what’s built on your planets is a very good idea, as the approval rating does indeed affect diplomacy and gameplay. I had several planets annexed very easily due to a low approval rating and lack of an actual presence there. It took me a bit to realize that certain structures had certain effects, and that those effects play greatly into the larger picture.

Once released there will be 12 playable species that should each offer differing and perhaps even unique perspectives on the galactic race for awesomeness. 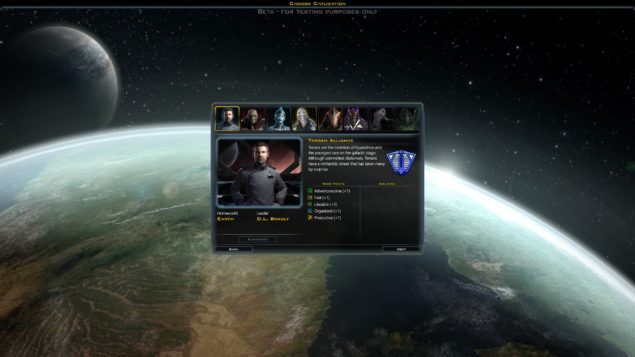 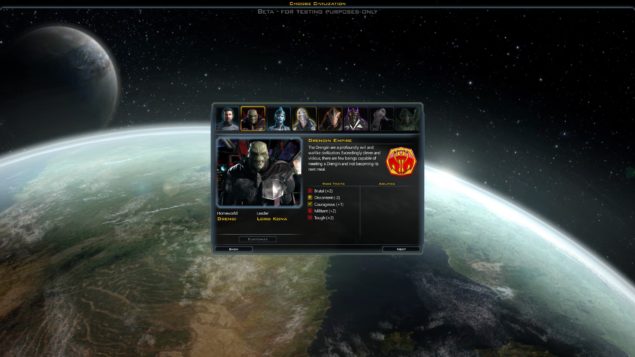 So how does it play? It’s rather engaging. It’s fun. It’s full of surprises. And most importantly, it feels very large. You’re part of a greater mechanism, and the little details they’ve added really do make it feel as if your decisions matter. Yes, it’s a 4X strategy game, and yes it resembles the genre. But the story and background is very well knit together in such a way that the unique story elements make it very appealing. It’s also very addicting.

I haven’t played a 4X strategy game in awhile, and I’ve forgotten the feeling of wanting to know what happens next. Sure, it’s easy to take a break and the pace can be slow, but that doesn’t mean that the thought and expectation of what’s to come isn’t enough to keep you engaged. You have no military capability when you begin. None. You have a scout ship with no weapons. What if you get attacked right away? What if you get invaded? God forbid it happen so early in the game. The anticipation of waiting for the warfare and defense technologies so that I can defend myself from the mysteries of the galaxy is actually kind of exciting.

But with all of that depth and the massive scale it can seem a bit overwhelming at times. There is so much to manage and so many little things that have to be taken care of in order to be successful. It’s huge. The interface does help a bit, though, as it will queue up anything that needs your attention. The galaxy does need you to manage it, however, and it’s a very large task despite being so fun.

But remember it’s still in beta form and comes with all the appropriate disclaimers. You may find that it hangs when you get to a certain size, though starting a new game can clear that up easily enough. Maybe you can buy the entire navy of a competing species for very little because it seems they don’t understand trade economics yet. But the community is active and Stardock Corporation is very adamant about providing a great experience. They’re using this beta to listen to customers and their feedback. That’s what a beta is, and precisely what Steam Early Access is all about.

Right now in its current state Galactic Civilizations III is a more complete and enjoyable game than many games that are declared to be “done”. Thankfully it’s even 50% off on Steam until Monday March 2nd at 10AM Pacific time.

I personally recommend it. I’m having a tremendous amount of fun and I believe that it can still remain fun for many years to come. It’s a game that can be replayed with different outcomes and different play styles to mix it up.

The official release is slated for sometime in April of 2015, so look for the final and complete build by then. So far they seem to be on track and have a great product already.

Galactic Civilizations III was purchased with the reviewers own money via Steam. The reviewer is not being endorsed in any way whatsoever. He just happens to like the game.