Fortnite Gets a Dose of Demented Deadpool Fun Starting Today 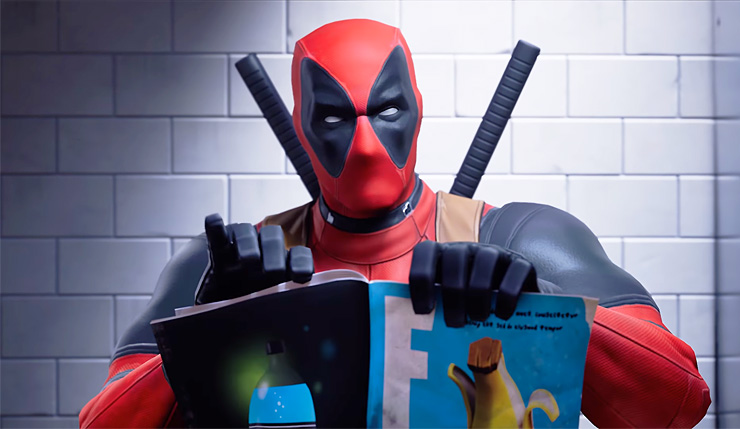 We’ve known he’s been coming for a while now (chimichangas popping up in the game was a dead giveaway), but now it’s official – Deadpool has arrived in Fortnite! As part of the Chapter 2, Season 2 Battle Pass players will be able to unlock a new Deadpool skin, and there are various other appropriately wacky items available as well. Ol’ DP has also taken over Fortnite’s Yatcht, which seems like bad timing during a pandemic, but the guy was never been much for self preservation. You can check out a brief teaser for the Fortnite-Deadpool crossover below (it’s got poop jokes!)

Here’s a bit more detail about Deadpool’s invasion of Fortnite:

No more stalling. It’s time to make the Chimichangas! Deadpool is here, and he’s taken over the Yacht (sorry Meowscles). Show up as the Merc with a Mouth himself with the Deadpool Outfit — available now exclusively as part of the Chapter 2 - Season 2 Battle Pass! You can unlock Deadpool by completing the mercenary’s Week 7 favor Challenge: finding two of his Akimbo Pistols (note that the Deadpool Outfit can be unlocked even if you haven’t completed any of Deadpool’s previous Challenges).

If you just want to show up to party, Deadpool’s got you covered. Just for stopping by and saying, “Hey,” DJ Deadpool will spin up a free reward for you: the newly-remixed Freestylin’ Lobby Track! You’re probably thinking to yourself… “Hey, I’ve got Deadpool. I’ve got Freestylin’. But I want more Deadpool in my life.” Fear not — he’s got you covered again! Give Deadpool’s Meaty Mallets for a test drive, take a glorious rainbow journey on his Dragacorn Glider (aka “Sparkle Thunder”), or just ride around with the dangerously dainty mini-scooter motorbike Emote!