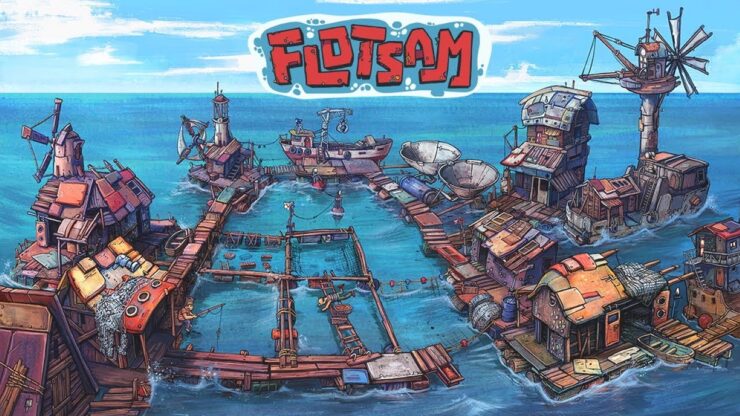 We have twelve years or less to stop the worst effects of climate change. This includes extreme weather and global flooding. Unfortunately, I can see myself playing Flotsam for a good chunk of that time, but at least if you join me you’ll know how to build a garbage town floating on the waves of civilization's destruction.

In Flotsam you build and manage a floating refuge from the ending ocean. Using the titular flotsam that spans the horizon to build recycled structures like drying racks, beds, and water distillers. Flotsam markets itself as a town-building game, not a city building one. The reason is clear, your floating utopia will probably never get beyond about a dozen or so citizens. But this smaller scale management works incredibly well for the game's overall design and is still enjoyable.

When resources in your area start to dwindle, be it wood, plastic, or fish, you can set your whole town to sail to a new place and begin harvesting the remnants of the old world all over again. This almost makes it a blend of survival games and the aforementioned town builder. In the same way that The Flame in the Flood was all about moving forward, never staying still for too long, Flotsam has a similar pace, demanding that the player always be looking at the horizon. Food and water are your biggest priorities. Fish are normally plentiful in the water but you’ll have to pay attention to their stocks or you could be facing a low key famine without noticing. Drinkable water needs to either be boiled with dry wood or collected from large and inefficient solar sills, and you’ll have to make sure you can balance your wood between vital fuel and building resources.

And of this, coupled with the delightful vibrant colours and gorgeous comic-style graphics, Flotsam just feels good to play. Watching a wave slowly roll through your haphazard town, making the buildings and walkways rise and fall is just pleasant, even if a lot of us would be permanently sick if we actually lived there. And the building and paths that connect them are incredibly detailed as well. The developers have really stressed the recycled and reclaimed aspect of the game's core mechanics. Walkways are a jumble of lashed together plastic bottles, doors, boards, and other debris. Structures and boats have a similar look, made proudly of the colourful and varied materials you’ve salvaged. 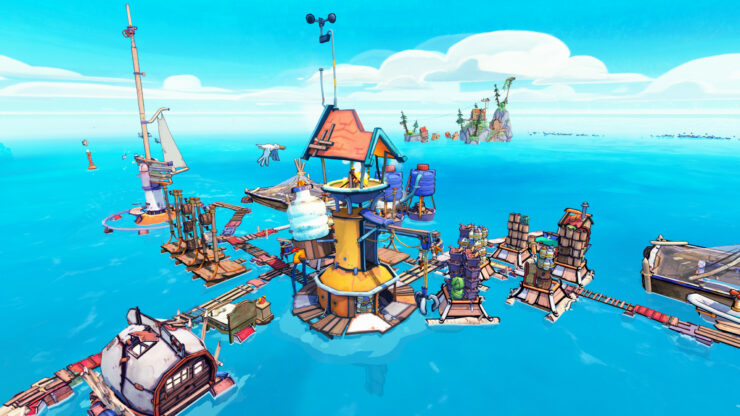 You don’t have complete control of your townspeople, instead, you'll assign tasks to be completed and the priority level for each character to do them. If people are looking for the next Stellaris, this isn’t it. But it means you can spend your time planning or just simply watching the adorable avatars doing their thing. You can speed up the game of course, but the difficulty isn’t bad and it has that sort of lazy sunny day vibe that makes you want to take it slow.

That doesn’t mean it isn’t frustrating sometimes though. Sometimes you really need people to focus on one task and for whatever reason, they want to do something else. At one early stage of the game, my entire town devoted itself to making freshwater when their food stocks were dangerously low. In the end, I had to turn off the distillers, but they still spent a worrying amount of time hauling the town's stores before one of them jumped in the fishing boat. The issue is that hauling is a separate task from gathering supplies. If someone is set to only fish, they will come back with a boat full of nibblers, then sit and wait for someone else to empty it. But if you add hauling to their routine, they might get distracted putting the fish out to dry, or moving dry wood from the racks to the stores. And there’s not much you can do to stop this cycle.

But the game is forgiving enough that even when I felt my town was trying to starve itself, someone always got a boat out in time. And hopefully, this is something that can be addressed down the river.

I’m looking forward to how Flotsam might develop through early access, but there is a lot of room for more to come. More buildings that use some of the latest game resources like nets and screws. More boats, islands and discoverable content. Perhaps the addition of random weather events. But even though I’m excited to see where this game goes in the future, I’m very happy with where it is now, gently rolling along the waves, cleaning the ocean one plank at a time, and hopefully remembering to go fishing once in a while.

Flotsam is priced €22.99 and should be on Steam Early Access for about a year still. We'll check again how it's faring once it gets to version 1.0.