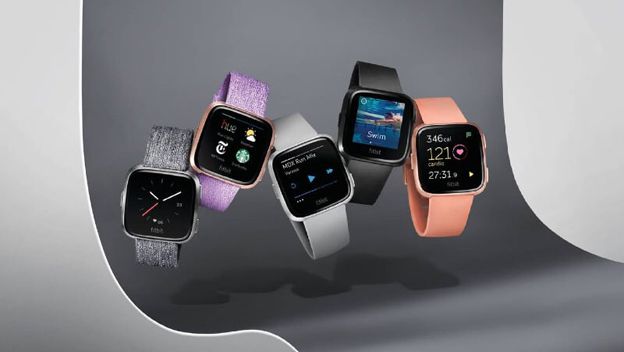 The Appl Watch is one of the most popular smartwatches. It packs powerful internals and blends well with Apple's ecosystem. We're already familiar with how Apple shapes a certain industry and the same is the case with smartwatches. Fitbit has announced its latest $200 smartwatch that closely resembles the Apple Watch in both, features and the external design of the device. To be precise, the Fitbit Verse is a redesigned version of the Ionic that comparatively costs less than the $300 price mark. So let's dive in to see how the Fitbit Verse bears resemblance to the Apple Watch and watch feature set matches we are talking about.

The Fitbit Verse is described as the 'rounded square' smartwatch with a touchscreen display. the material used in the frame is anodized aluminum and comes in three color options - rose gold, black, and charcoal, which is more of a gray color. The most appealing factor in terms of the look of the device is the watch bands.

There is a wide range of bands available for the Fitbit Verse and it looks like the company is working to take on the Apple Watch in terms of fashion accessories.

Fitbit Versa [is] a modern, intuitive smartwatch at an approachable price. The lightest metal smartwatch in the U.S. market, it offers a comfortable design and a new dashboard that simplifies how you access your health and fitness data. Advanced health and fitness features like 24/7 heart rate tracking, onscreen workouts, and automatic sleep stages tracking meet smart features like quick replies on Android, wallet-free payments on Fitbit Versa Special Edition, and on-device music – all with 4+ days battery life.

Now if we're talking about some of the features of the Fitbit Verse, it features a 24/7 heart-rate tracking system, offline music storage, quick replies for Android as well as an Apple Pay like payment system. However, there is no built-in GPS and relies on your phone with the Blurtooth connection.

if you're interested in getting it, the pre-orders are now live and will land on Amazon tomorrow. The deliveries will be commenced next month. There will be more to the story, so be sure to stay tuned in for more details.

This is all for now, folks. What are your thoughts on the Fitbit Verse? How closely do you think it matches the Apple Watch? Let us know in the comments.