Social trading and multi-asset brokerage firm eToro has announced its decision to merge with a special purpose acquisition company (SPAC) FinTech Acquisition Corp. V (FTCV). The deal envisions the new entity to have a market value of $10.5 billion and a $650 investment from private investors. Shares of FTCV have jumped by as much as 16% in pre-market today, making the announcement a rare instance of retail investor interest in non-EV SPACs.

Financial metrics shared by the brokerage reveal that it earned $605 million in revenue last year to mark for a strong 147% growth over 2019. Despite this strong performance eToro believes that the best lies ahead as it anticipates to further grow its revenue by 68% this year to cross the $1 billion mark for the first time in the company's history by the end of this year.

Further projections by eToro show that it expects to maintain an upward-facing growth trend for the next four years as well, as it provides a $2.5 billion revenue projection for 2025 end. At the same time it also expects its year-end funded accounts to grow to 6.1 million by 2025, from an estimated value of 1.9 million for 2021 end.

Churn rate (the number of users that eToro expects to lose over time) is remarkably consistent and highlights management's confidence in its product and services. eToro believes that this rate will stay consistently at 1.5% for the next five years, mirroring its value at the end of last year. As the number of the company's users grows, however, the actual number of churn will naturally go up as well. 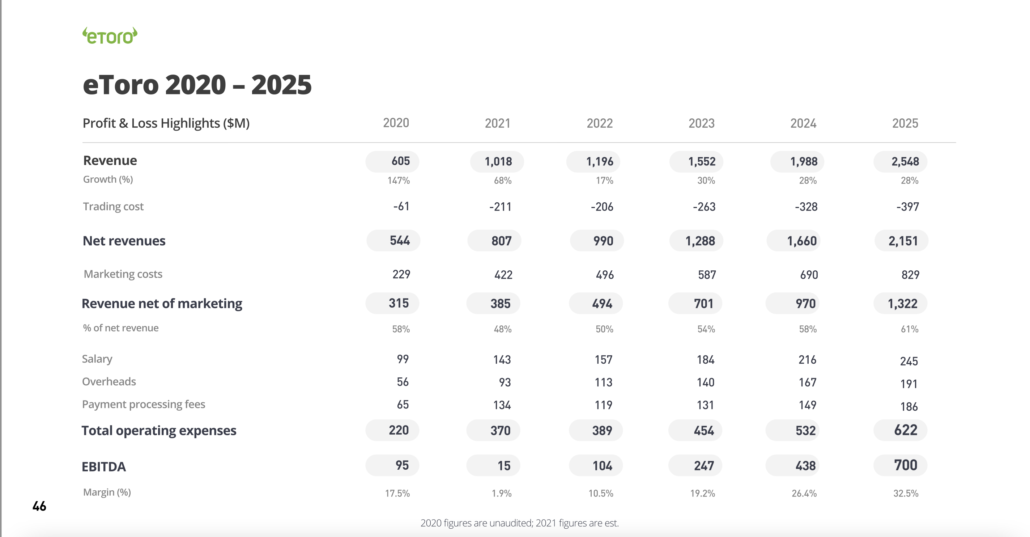 An important factor for the broker is that even though it expects to grow revenues roughly 4x between 2021 and 2025, its operating expenses will grow by an order of magnitude lower. Being a software-based services providers, the company incurs fewer expenses than other firms and a cursory look at its financial projections reveals that the bulk of its operating cost growth is contributed by elements directly linked to service expansion.

Due to this operating model, eToro's operating margin is projected to mirror its revenue growth over the next five years.

A startling revelation made by the company today was the growth in registered users at the end of January. Growth in this segment for the month outdid the average new monthly users that eToro added in 2019 and 2020. Data shared by the brokerage reveals that while average users added per month for 2019 and 2020 stood at 192,000 and 440,000 respectively, the figure crossed a million to sit at 1.2 million registered users added in January.

The number of monthly trades also mirrored this, with eight million and 27 million for 2019 and 2020 being vastly surpassed by the 75 million active trades in January. 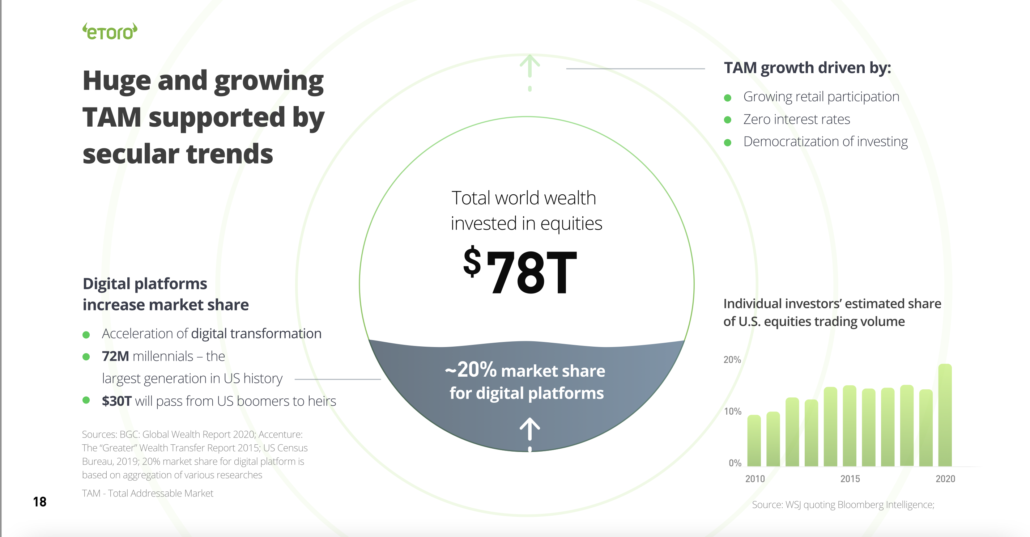 The firm also believes that it will be able to capture one-fifth of the total global wealth invested in equities ($78 trillion), and that the growth of millennial users combined with inherited wealth places digital trading platforms in a unique position to target a growing market.

eToro and FinTech Acquisition Corp. expect the deal to close by the third quarter of this year with the combined company to trade as eToro Group Limited on the NASDAQ exchange.