During a stream at the Tokyo Game Show a new Final Fantasy XV video was shown, detailing the Chocobo riding and fishing aspect of the RPG. 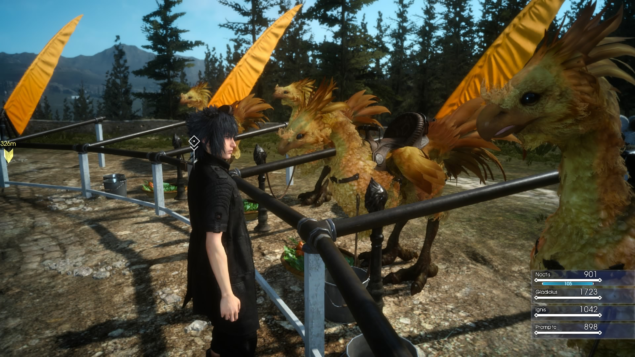 Players will be able to use their fishing poles in pools of water, lakes and ponds by using their own fishing pole. Catching fish will be important to the hunting and cooking aspect of the game and will provide certain buffs to the party when cooked. Final Fantasy XV will introduce a large number of different lures and rods which allows players to catch different kinds of fish. When fishing, the player has to ´fight´ the fish by reeling them in using on-screen prompts.

Check out the video from the stream below:

Final Fantasy XV will feature Chocobo riding like previous Final Fantasy titles and while on their Chocobo, players will be able to walk, perform dashes or jump to reach higher areas.  According to the stream Chocobo's will be present throughout the world of the game.

Earlier this week Square Enix released a new trailer for the game called 'Dawn 2.0'. The game is set for a release on both the Xbox One and PS4  in 2016. The actual release date will be revealed in March 2016.