Developer of Final Fantasy series, Square Enix, had announced earlier in the year at E3 that it would port the popular title to iOS. Final Fantasy VII has finally arrived for iPhone and iPad. 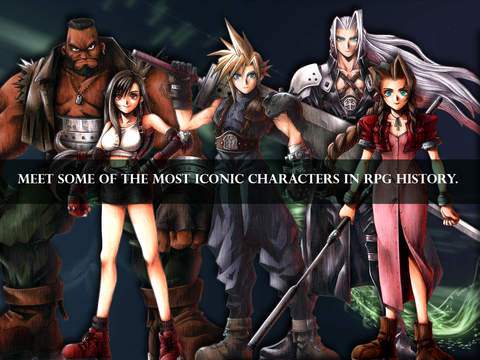 Final Fantasy VII iOS title is a direct "port based on Final Fantasy VII for PC," confirms the game's iTunes page as opposed to earlier rumors. The title is now available for iPhone and iPad screens without any changes to the original storyline. However, some enhancements have been included to better support the new platform.

Users will be able to switch between a "virtual analogue" and a "fixed 4-way digital control pad" for onscreen controls. As for other improvements, the details mention that “the iOS edition also includes an option to turn enemy encounters off on the world and area maps (will not skip event battles) and a Max Stats command to become all-powerful in the blink of an eye.”

The first Final Fantasy to feature 3D backgrounds and CG movie scenes, this dramatic tale continues to be loved by numerous fans around the world. Battle stages also appear in full 3D for the first time, bringing an even greater sense of awe and spectacle to combat!

Customize your characters in any way you like using the fantastic “material” system that allows endless combinations of spells and abilities.

This is a pretty big news for all the gaming enthusiasts as Final Fantasy VII is one of the most popular titles of the entire series. You can now purchase Final Fantasy VII for iOS in the App Store for $19.99. Users will be able to run the game on:

Reportedly, the game is still not available in the US store. But don't worry, it will be showing up really soon as Square Enix's North American franchise has already posted the announcement in a YouTube video.