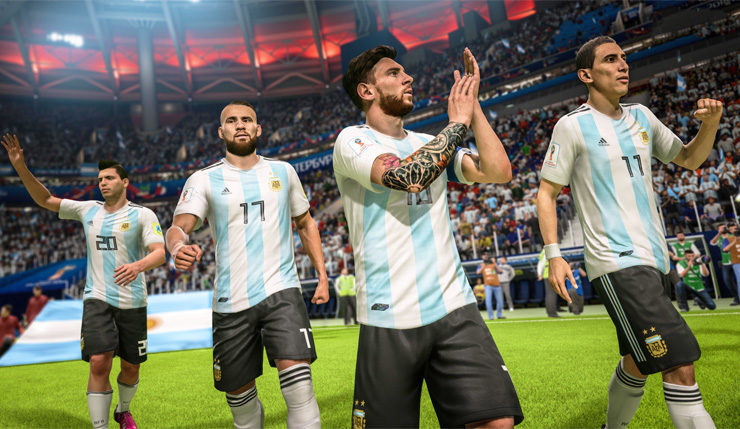 2018 is a World Cup year, and, unsurprisingly, the world’s most popular sports game is getting in on the action. EA has announced FIFA 18 will be getting a batch of officially-licensed World Cup content at the end of May. You can check out a trailer for the free update, below.

The FIFA 18 update will add a new World Cup tournament mode and, of course, a whole bunch of new Ultimate Team content. Here’s the official rundown of what’s coming:

Experience the excitement and drama of the world greatest event with the authentic World Cup tournament mode featuring all 32 licensed countries, or rewrite history with a custom tournament using non-qualified nations such as USA, Italy, Netherlands, and Chile. Feel the excitement on and off the pitch through official FIFA World Cup elements, from immersive atmospheres that include all 12 stadiums from Russia to authentic pitch environments, national team banners, high-resolution crowds, and the official graphic and broadcast package

You can also play FIFA's most popular mode in the new FIFA World Cup Ultimate Team experience. Build your dream international squad with stars from all 32 qualified nations plus legendary World Cup ICONS. As an added bonus for FUT players, every Standard or Premium pack purchased in FIFA World Cup Ultimate will grant the equivalent pack value in FUT 18.

Gooooooooal! Cough. Sorry, I never pass up an opportunity to do that. I remember the bad old days when you had to buy a separate game just to play through the World Cup, so kudos for EA for releasing the content for free. Fans would grumble, but they could certainly get away with charging for it if they wanted to.

The 2018 FIFA World Cup Russia update arrives on PC, Xbox One, PS4, and Nintendo Switch on May 29, two weeks before the actual World Cup, which kicks off on June 14.