Far Cry Primal PC's release date has been confirmed during the brand new trailer showcased at The Game Awards 2015. The game will be available on March 1, 2016; that's merely a week after the PlayStation 4 & Xbox One release date of February 23, which is definitely an improvement over Assassin's Creed Syndicate's whole month of delay. 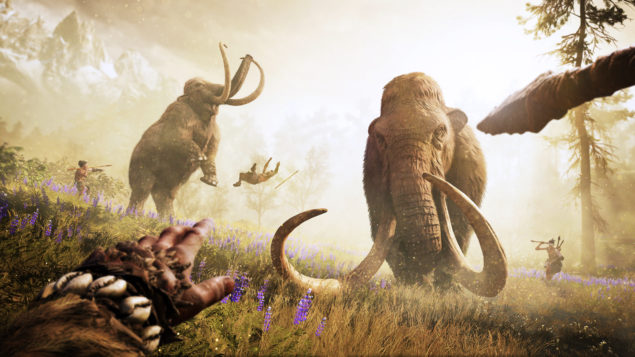 Far Cry Primal, announced just two months ago, is set in the Stone Age as suggested by the name. Ubisoft also released a lenghty developer walkthrough yesterday, showcasing some of the game's features.

The main character, Takkar, is supposed to be the first Beast Master. As such, players will be able to tame beasts such as dire wolves, owls, mammoths, jaguars and sabertooths; each one can help Takkar in a different way.

Dire wolves can growl to warn Takkar of incoming danger, for instance, and naturally they can help with hunting - just pointing the prey out seems to do the trick.

An owl can also be summoned and it can do many things, such as surveying the area, sending beasts, dropping bombs and even diving down to attack enemies directly. Jaguars are great for a stealth approach, while mammoths can be ridden (along other beasts). The walkthrough also shows a bear, which is apparently a great "tank" in that it draws the attention of enemies, and a sabertooth tiger which is deemed a "deadly predator".

Given Ubisoft's ongoing partnership with NVIDIA, it's safe to assume that Far Cry Primal PC will feature effects like TXAA and HBAO+, though nothing has been confirmed so far.