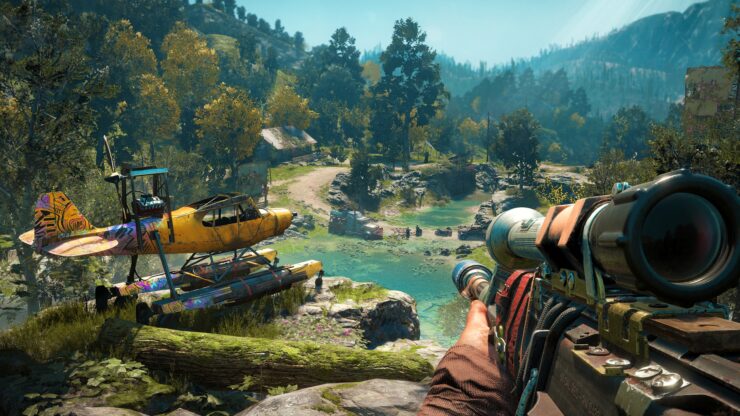 Far Cry 5 ended on a fizzle for me. (Spoiler Alert) I had expected the end game to let me come back to a nuclear wasteland to continue exploring, after all the login screen had changed after the final scene. But I was pretty disappointed. It seems that Far Cry New Dawn heard that cry and are attempting to let people come back to Hope County years later and fight a new threat. Once again Ubisoft return with the Dunia Engine to power their open world romp and that's not a bad thing.  Far Cry 5 saw pretty good performance all around with those who support Rapid Packed Math and FP16 seeing some nice gains.  This go around both Radeon and GeForce will be able to take advantage of the FP16 compute so this should be a bit interesting.

Far Cry New Dawn features a built in benchmark that is much more representative of in game performance than the last installment. But it's important to note that there are some interesting performance culling practices going on that are effecting the final performance result, so we will be sticking to using OCAT to record the presents to deliver more accurate Average FPS, 1% Lows, and .1% Lows. So, if you have a similar setup and see different numbers here than your results screen, this is why.  We tested the run 3 times and took the average from each performance set to calculate the results you'll see here on screen.  We are aware that as we are writing this after finishing all the testing that Radeon has released driver 19.2.2 we reached out to inquire any performance changes and were informed that only Crackdown 3 had performance impacts from the driver.  We'll be using that driver in that title over the coming days.

The idea with the preset scaling is so that we can identify the delta between presets to see if there is a significant performance impact by scaling up or down.  In this title we saw much of the demand shift from the GPU to the CPU when reducing in game presets to the point we were getting much higher average frames but were suffering from the CPU becoming bogged down at times to result in abysmal .1% lows making the game much smoother when leveraging more intense options on the GPU side of the equation. 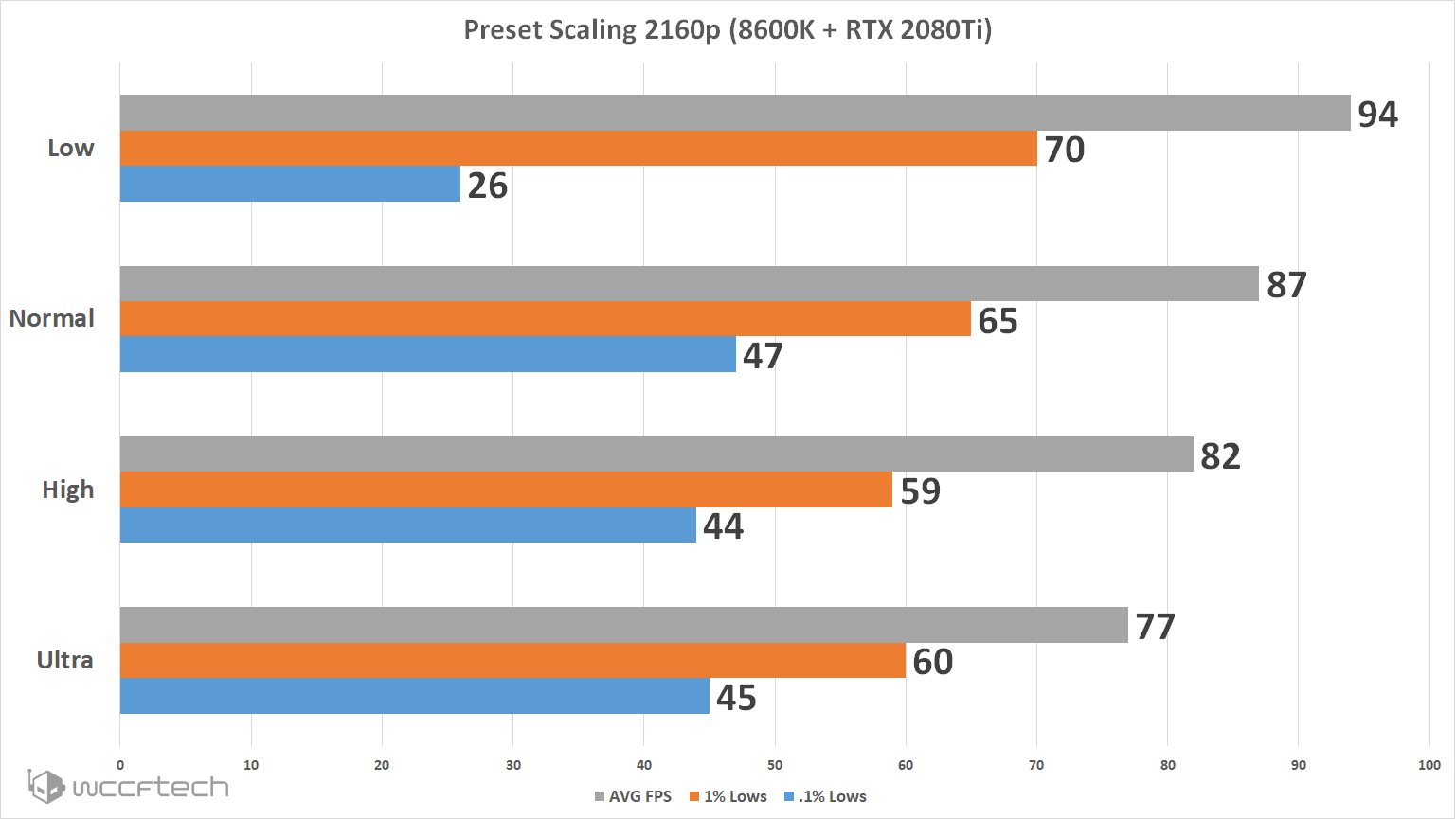 This will be the last time we're limited to testing core scaling on this particular chip as our i9 9900k will be in by the next performance review. But for now we can see that this game does a very good job leveraging more than 4 threads with a healthy performance jump at the 6 core 6 thread level.  Once again, if only 2 cores and threads are available, hang it up in this one. 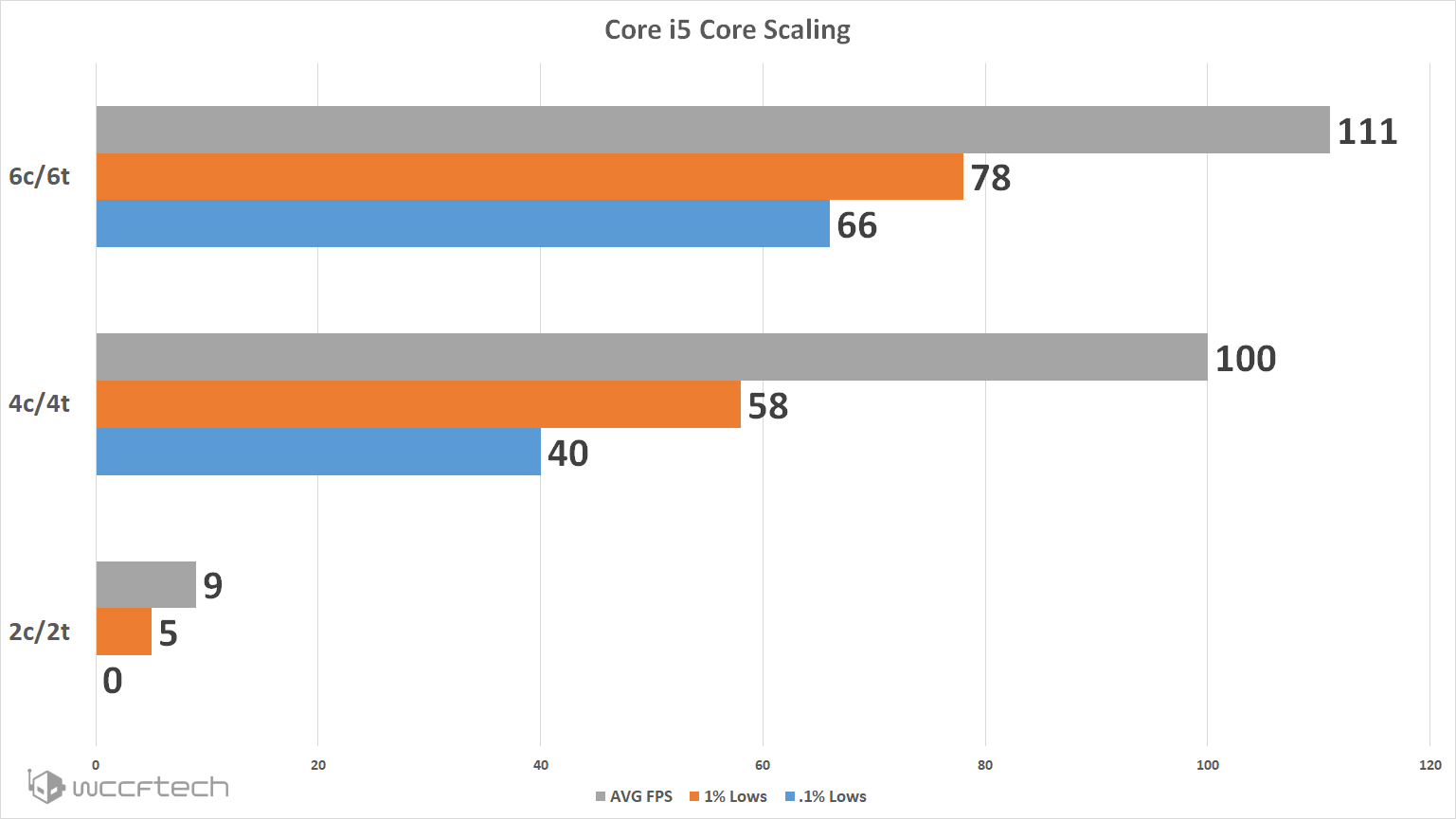 Interestingly enough on Ryzen while we do still see a benefit going from 4 cores on up to 6, the improvement doesn't appear quite as drastic as it was on the i5 8600K.   But a 30% improvement over the .1% lows is a welcome state for 6 core Ryzen 5 owners.  There are negligible benefits of 8 cores in this game on Ryzen, but at least there's not a performance impact from having the extra.  It's good to see a DX11 title be able to scale to these levels. 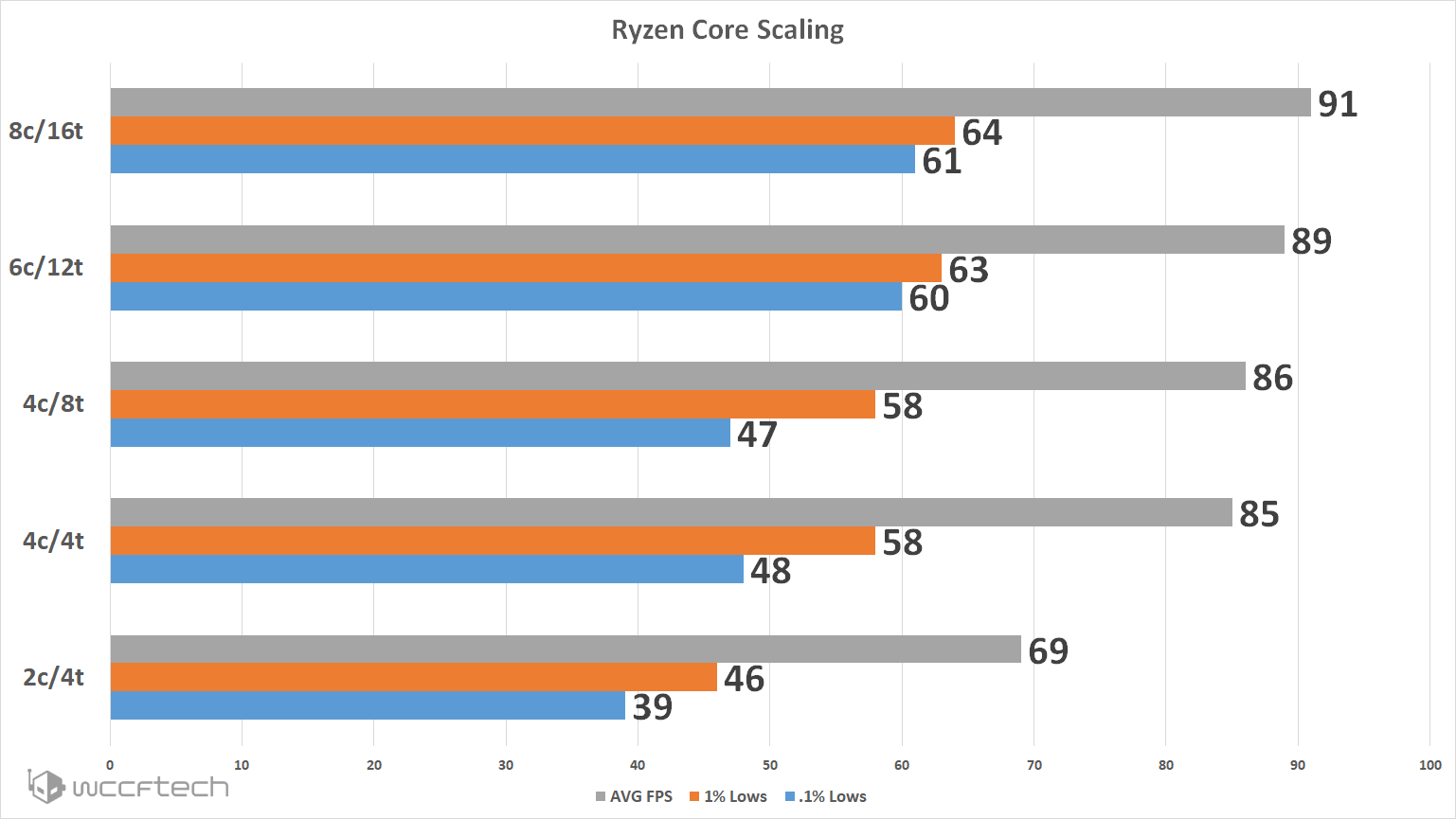 This test is always interesting to look at to see how the performance comparisons between the two chips are at various resolutions.  Once again we see the Intel chip leading at the lower resolutions but the Ryzen chip closing the gap once you're at the 4K resolution.  Interestingly enough the performance at 1080p on both chips suffers from bottlenecking the RTX 2080Ti as moving from 1080p to 1440p shows very little performance impact. 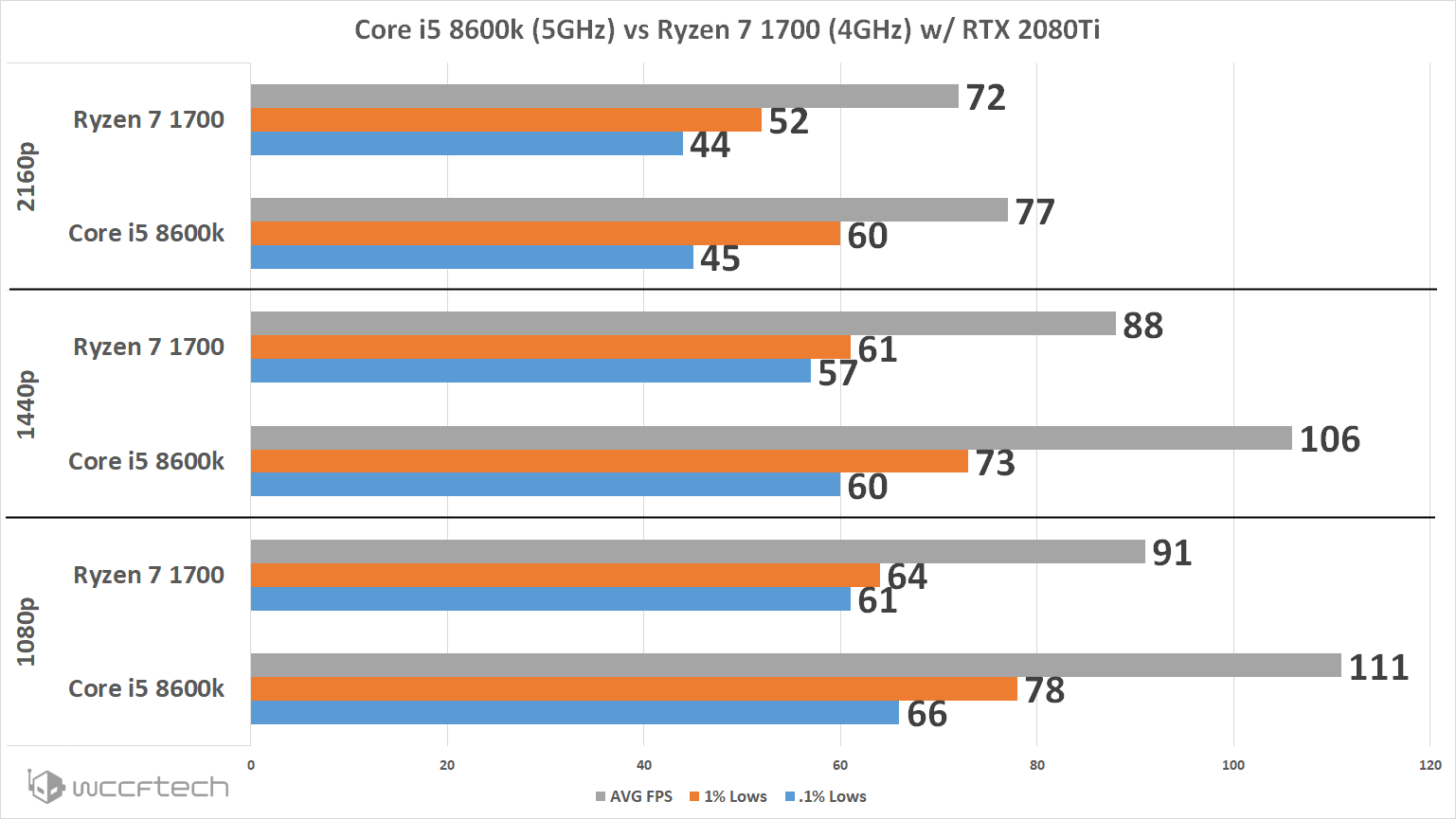 Well, I've finally had a game come along and prompt me to upgrade my Z370 test bench from the Core i5 8600K, because even at 5GHz the 6 core chip is bottlenecking the higher end RTX cards and I imagine it would be doing the same to the Radeon VII if I had one to test with. You can clearly see this when you hit RTX 2080 levels of graphics cards as the performance there is actually worse than the RTX 2070 and even the RTX 2080Ti fares worse overall thanks to the CPU becoming choked and holding up the GPU from rendering frames.  We'll likely revisit this once the Core i9 9900K gets delivered. 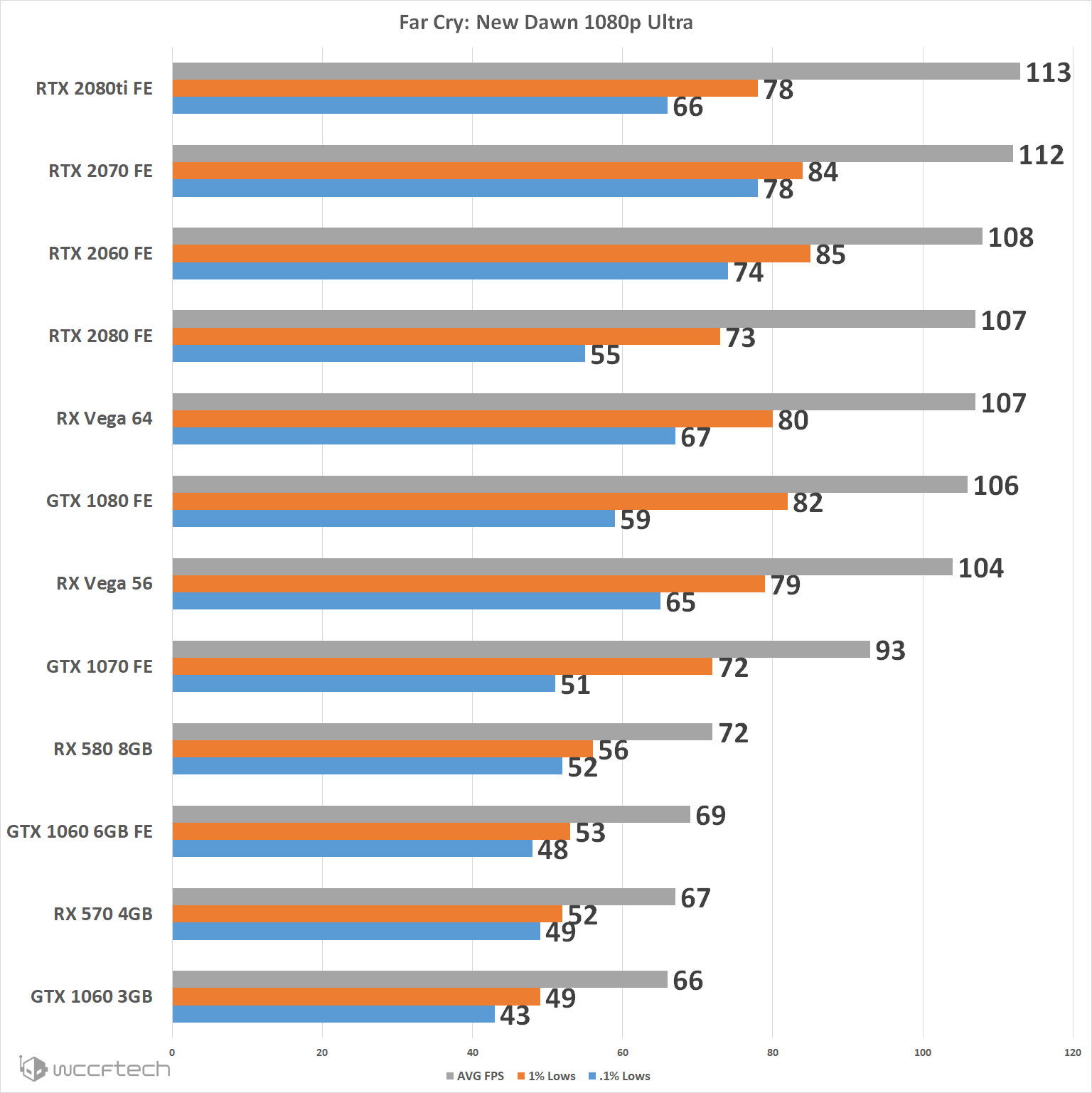 Even at 1440p with the higher end RTX cards the CPU is still getting pounded once you move above the RTX 2070 and RX Vega 64.  This CPU overhead is very typical in the nature of open world games and makes me wonder if games like Far Cry New Dawn and the Assassin's Creed series wouldn't benefit greatly from DX12 in the way that The Division 2 has. 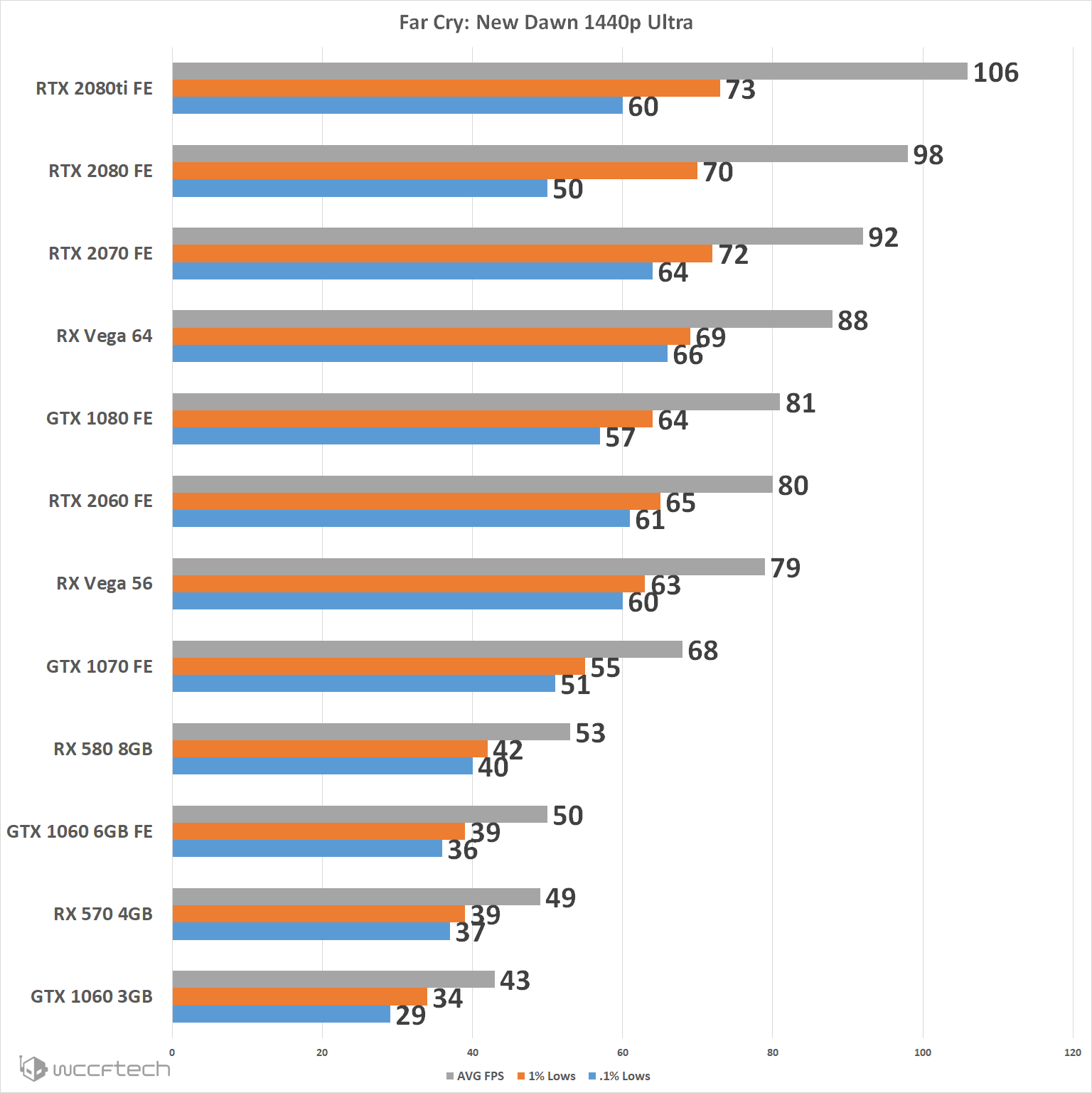 Running this game at UHD mostly eliminates this bottlenecking, but as you can see from the .1% lows it still persists slightly.  I'll definitely be revisiting at least the RTX 2080 and RTX 2080Ti after the new test bench CPU arrives to see if there's a difference. 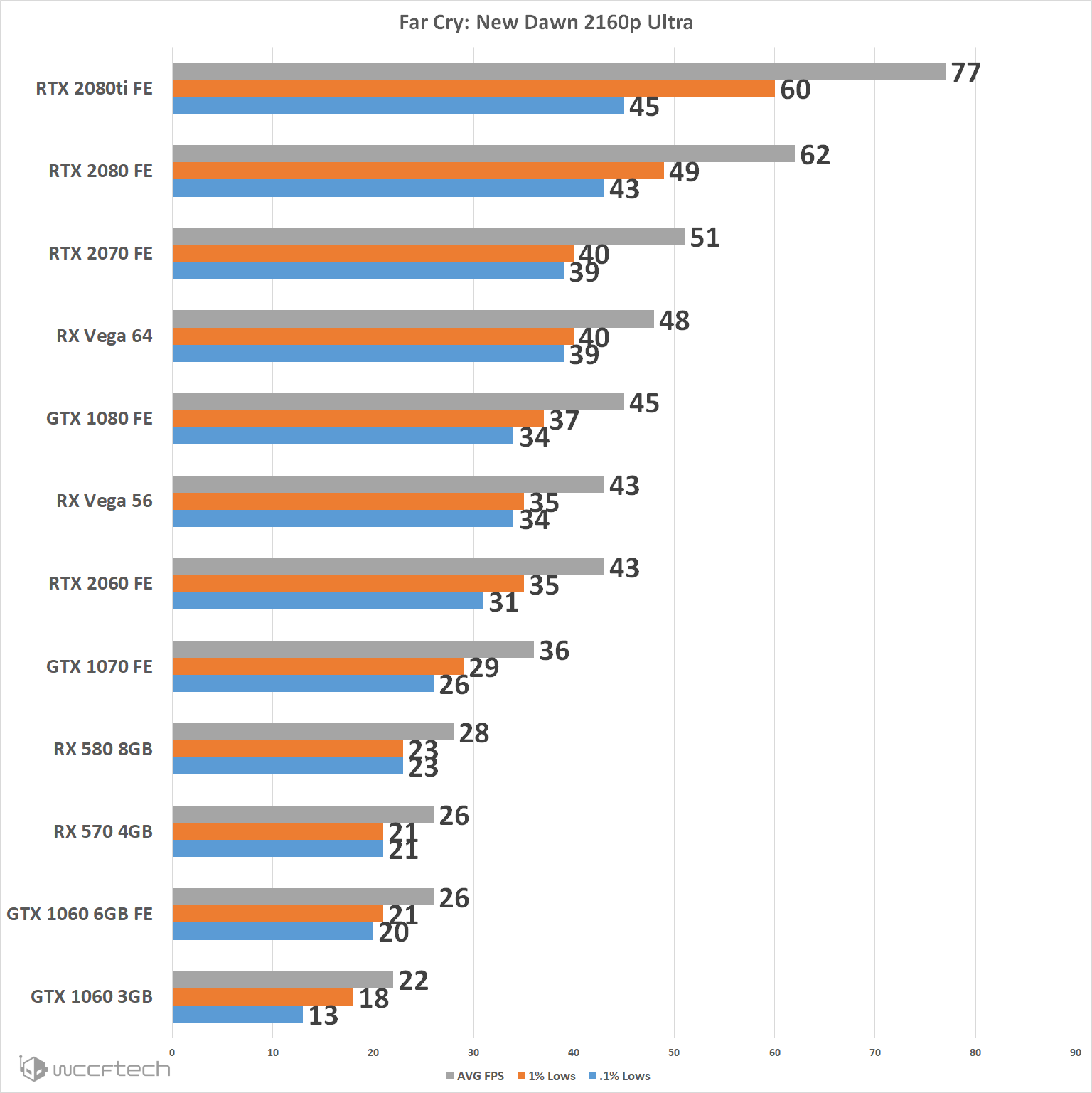 Not long after getting the RTX 2060 back and updating those charts I received my i9 9900K and jumped right in to dig around on the RTX 2080 and RTX 2080Ti and found that they did indeed improve drastically to the point that this new section is being added to include those results as well as the full array of Intel mainstream Core Series core scaling.

You can see from the results that the i5 was clearly holding back the RTX 2080 at 1080p and 1440p resolutions.  Noting the results show the i9 9900k running at the EVGA Z370 Classified K's auto clock rate where all cores are reaching 4.7GHz and a manual 5GHz overclock to check clock for clock against the original i5 results at 5GHz.  The overclock to 5GHz maintains within margin of error difference. 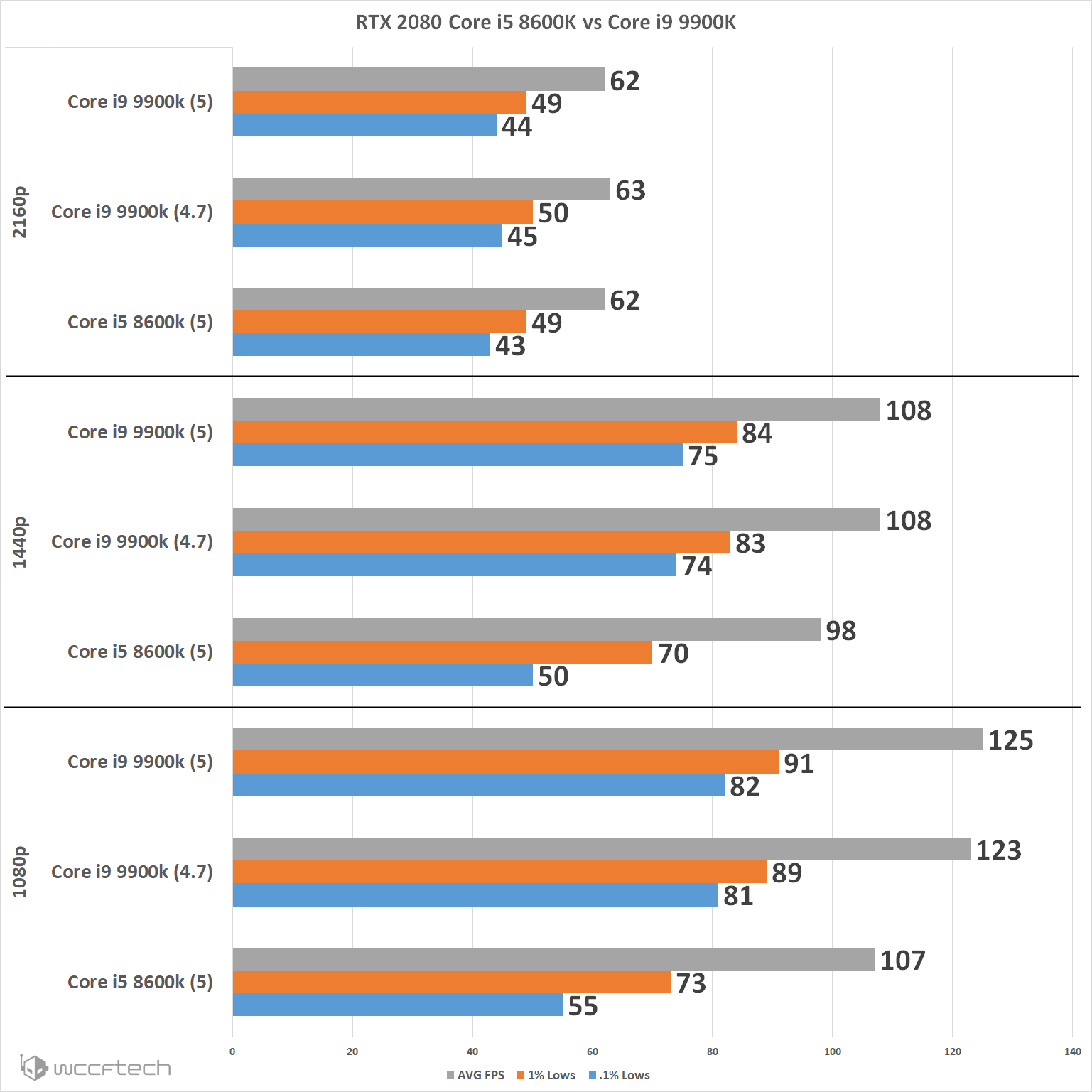 Moving to the RTX 2080Ti speaks a very similar language and the testing was the same as with the RTX 2080, but the big key difference here is the clock speed mattered just as much as core count.  We see at all resolutions a significant bump in performance, but at 1080p we see even the 5GHz i9 9900K holding the RTX 2080Ti back to RTX 2080 levels of performance, the story begins shifting at 1440p and even more so at UHD resolutions. But, even at 3840x2160 we see the RTX 2080Ti benefit measurably from the increased core clock from 4.7GHz to 5GHz 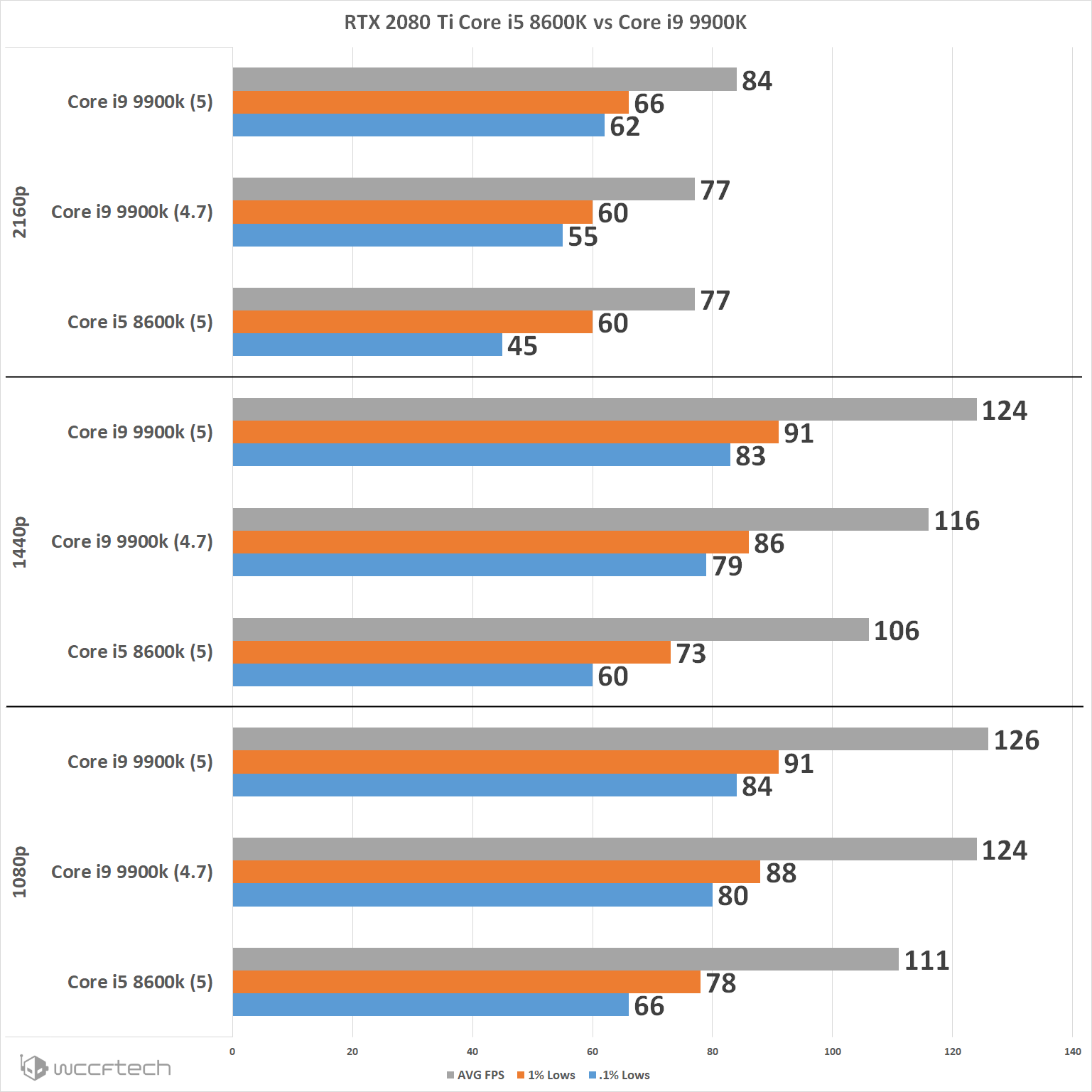 Looking at the i9 core scaling the story is exactly as expected where we see excellent scaling, to a point.  Looking at the 4c/8t and the 6c/6t we can see that the engine does indeed prefer more as the minimums are stronger on the chip with more threads.  However, that is only true for so long.  We actually see a bit of a falloff at 8c/16t over the 8c/8t counterpart where 8 real cores win out when not having to share any resources and splitting to 2 threads.  Very interesting case at this level that can often make the decision between the i7 9700K and the i9 9900K so difficult for some people. 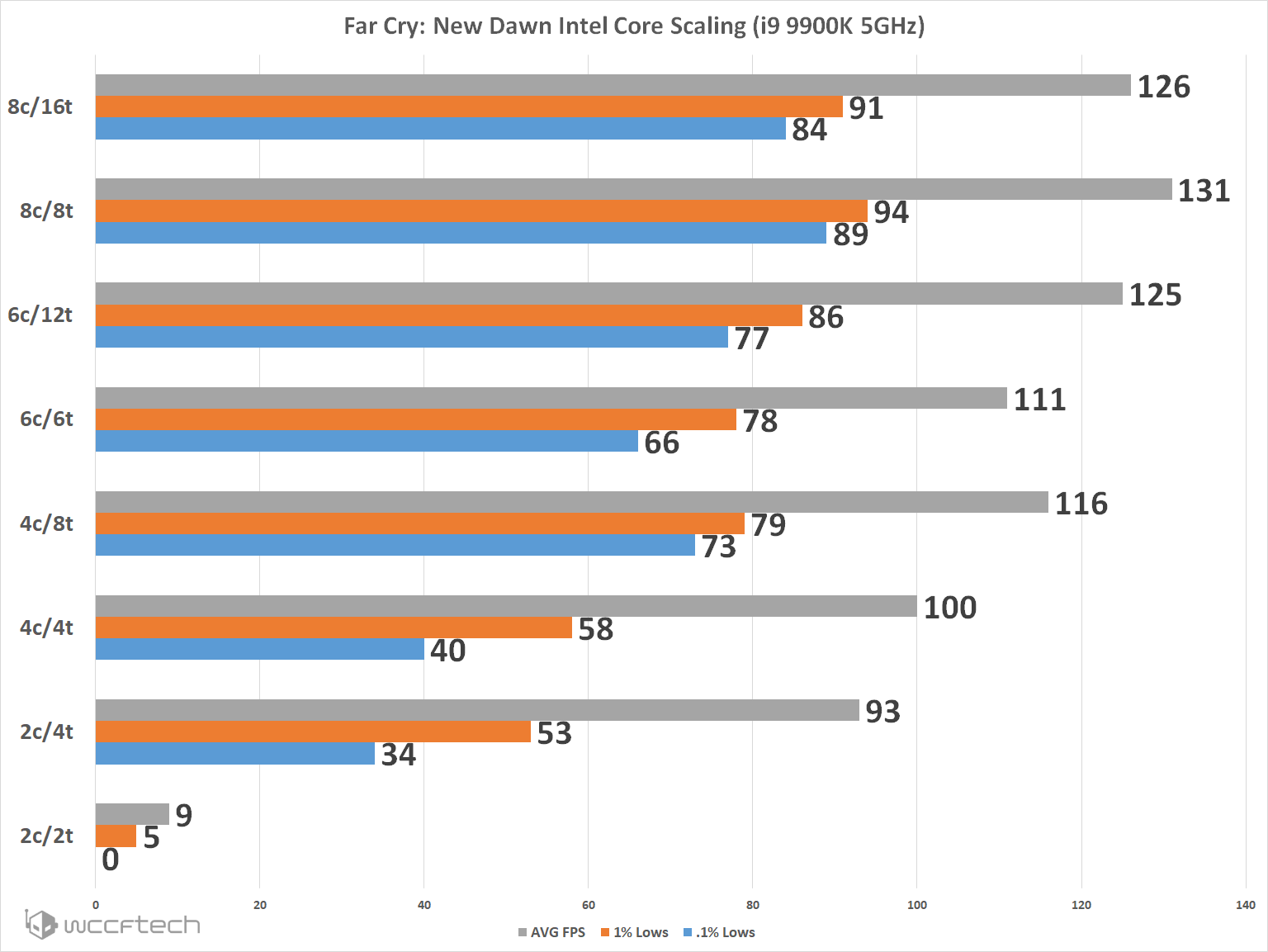 The performance of Far Cry New Dawn should really come at no surprise to anyone, but much like the launch of Resident Evil 2 Remake we're seeing good solid performance across all cards at their intended resolution.  The Dunia engine still shows itself to be a strong and adaptable engine, but one can only wonder how the open world game could benefit from greater draw call performance and lower the CPU overhead as we're seeing a 5GHz 6 core chip become strained at lower resolutions now.  But, with all that out of the way it's time for me to get back to exploring a strange version of a post apocalyptic Hope County.