Bethesda officially showed off several minutes of Fallout 4 gameplay which has been officially announced for the PC, PlayStation 4 and Xbox One and arriving in 2015. The game is set in post-apocalyptic Boston and driven by deeper RPG elements to deliver a full-on Sci-Fi experience set in the fallout wasteland.

Fallout 4 appears to be the origin story of the Fallout series, a look into what happened to precipitate the nuclear war and also what happened immediately afterwards. The game starts in the pre-apocalypse world which is before the great war started on 23rd October 2077.  This is where you start off by creating your game character. The new face creation tool has got a new sculpting mode and the game can be played as both female and male. The events that follow lead up to the 2 hour war which is called that since the war lasted only 2 hours after which the bomb had pretty much destroyed everything on the planet. The game next begins 200 years later with the same character you started off with but you are the sole survivor of the vault in which you seek refuge. The player could possibly have survived that long through cryogenic sleep that were also found in Fallout 3 in a vault.

Having a canine friend featured really hits the emotional nail on the head. The dog also reminds of Dogmeat from Fallout 3 which was a possible companion in the previous game and quite an iconic one along with Rex in Fallout: New Vegas. Compared to the previous trailer which was showcased a few weeks back, the latest gameplay video shows more user to AI interactions showing how Bethesda is really making a leap in creating Fallout 4 their most immersive and interactive game to date.

Talking about the graphics themselves, the scope of Fallout has definitely increased as seen in the latest game play video however there seems to be room for further improvement. The game engine which is an updated version over Creation Engine (Not a totally new engine) allows Bethesda to create a massive world on their existing tool set but enhance the scope and make the world more denser for users to explore.

The great thing is that for the Fallout series of games (and Fallout 4 no doubt), the graphics are only part of the equation. The story, atmosphere, humor and general grandness are what draws people to it. It’s so much more than its graphics.

Gameplay and story both make up for a huge part of Fallout 4 and boy oh boy, Bethesda really refined their gameplay with Fallout 4. The new systems which include a new Pipboy system and even more upgradable tools and weapons sure make up for a great experience but the new story is far more impressive from the sound of it.

The gameplay features are intensive, from giving NPC companions objectives and tasks to accomplish to crafting and building  entire bases which can be defended using turrets and allied companions. We have seen these mechanics being adopted by several survival games such as Rust and H1Z1 but Fallout 4 will allow these in single player mode with vast modification options. Just talking about weapons, there will be 50 base guns and over 700 modifications available for them. Even full set power armors are modifiable in the game which is truly impressive.

“In Fallout 4, mixing things up, we are making the game more ‘Story Based’ and the player character will finally talk, and narrate his storyline. At the beginning of the game, you create your character (You can only be a male in the main story),”

Other rumored details include:

If you do feel the need to pre-order, Fallout 4 is $59.99 and has a release date tentatively set for December 31st 2015 as per Amazon. The Collectors edition comes with a fully enable PipBoy 3000 and can be merged with a smartphone to allow additional connectivity options. The platform is based on Android / iOS but can be linked to PC and consoles. The game officially launches on 10th November 2015. 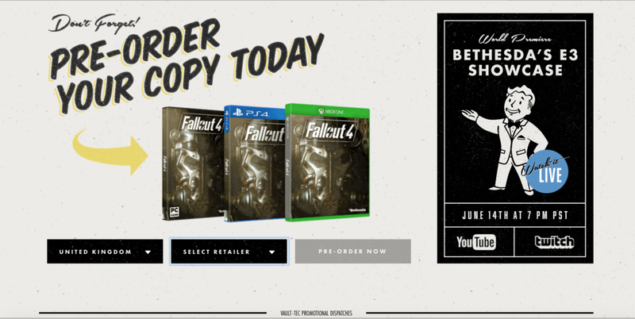