While the world is focusing on releasing apps that adhere to the video conferencing services, Facebook has released a new app called "CatchUp" that targets people who are looking to make audio calls. Surely, it might sound strange to some but it seems that this app is going to compete with FaceTime Audio.

With CatchUp, users can have up to 8 people in a single video call. However, the app wouldn't be an experimental app if it did not have features that allow it to set itself apart.

As far as differences are concerned, users will be able to set their status to either "Ready to Talk" or offline. The best part is that the app does not require a Facebook account work, which makes it all the more accessible to those who are not on Facebook.

Additionally, Facebook has gone on in their blog post about how people who have reduced calling their friends and family more often is because they are not sure just when they are available to talk. Additionally, calling them might result in it happening on a time that is not as convenient. With CatchUp, at least this problem is addressed in a way that they can set their status as "Ready to Talk". 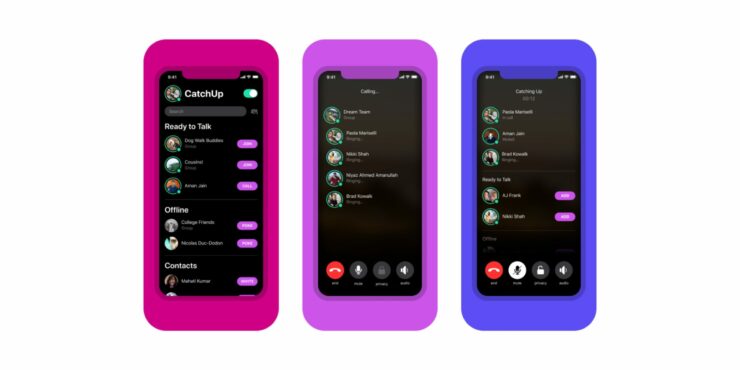 Users will be allowed to create as well as join group calls of up to eight people. You also have the option to have one-on-one phone calls, of course. Facebook has also talked about how they want to give ease of use to the users as they will be able to make calls with a single tap and they won't have to merge calls either.

This is not the first time Facebook's NPE team has released an app. We recently talked about how the team released an app that targetted couples, and now this is another great app for people who just want to communicate.

At the time of writing, CatchUp is only available in the United States, and it is being tested under Facebook's NPE brand. However, we cannot be sure if this app will be pushed to a broader or a global release any time soon.