Amazon's constellation of NGSO FSS internet satellites will be operated by Kuiper Systems LLC which is an Amazon.com Services LLC subsidiary. Kuiper's 'Project Kuiper' received FCC approval for a constellation of 3,236 satellites in July 2020. Image: Amazon

Online retailer Amazon's satellite internet arm Kuiper has teamed up with social media giant Facebook, Inc to develop its satellite service as it gears up to compete with Space Exploration Technologies Corp.'s (SpaceX) Starlink internet service. Starlink and Amazon have designed their systems to consist of satellites operating at low altitudes to improve latency and service speeds over traditional satellite internet providers who traditionally operate their spacecraft in higher orbits. Courtesy of its Falcon 9 rocket, Starlink has built its first stage satellite constellation and is currently providing users all over the globe with a beta service. Amazon plans to launch its first Kuiper mission soon after signing a deal with United Launch Alliance (ULA) for the launch vehicles earlier this year.

The Information first reported the deal, and it was picked up by GeekWire, who then reached out to Amazon and Facebook for comments. Amazon confirmed that the deal is real, but neither it nor Facebook revealed the financing arrangements behind the transfer.

The Information's report also provided details about the skillset of the employees transferred to Kuiper. These include "physicists as well as optical, prototyping, mechanical and software engineers who have worked on aeronautical systems and wireless networks," according to GeekkWire.

Additionally, The Information also reported that Amazon had paid Facebook for the deal, but the exact amount is unknown. Since publicly traded companies are not required to report such information, it is unlikely that the payment amount will be publicly disclosed.

According to The Information, as quoted by GeekWire:

“It’s not unheard of for big companies to buy groups of employees from one another, just as they often buy small startups to beef up staff in various parts of their business. 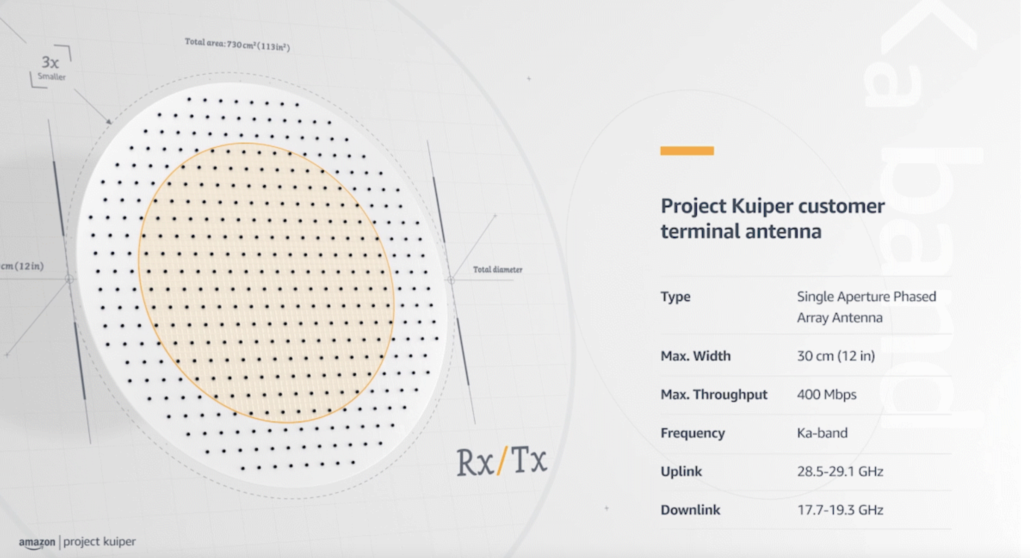 Specifications for its Kuiper satellite internet terminal were revealed by Amazon earlier this year. Image: Amazon

Even though Amazon has not started building out its satellite constellation in Low Earth Orbit, it recently lost a bid to have the Federal Communications Commission (FCC) stop SpaceX from reducing the altitude of its Sarlik satellites and elevation angles of its ground stations. Amazon argued that the changes would create interference problems for Kuiper and increase the risk of space accidents since its and Starlink's satellites will be operating nearby.

While the Commission approved SpaceX's request, it did so after Starlink agreed to some concessions, such as agreeing to an altitude cap for its satellites. Unlike Starlink, however, which is currently fighting with terrestrial 5G providers for the 12GHz wireless spectrum, Amazon is relatively free from spectrum constraints for its user terminals, but their network performance is uncertain since the Kuiper constellation is yet to become operational.

Facebook's decision to provide Amazo with its networking personnel comes as the company does not participate in the satellite internet sector. Other tech giants such as Google and Microsoft have teamed up with Starlink for use cases such as cloud-based data centers in remote regions.

Starlink is currently part of a debate at the FCC, seeking input from all parties on whether to set new rules for spectrum sharing in the 12GHz band. Starlink and other satellite companies oppose any changes, which their terrestrial counterparts argue that the U.S. will miss out on the economic benefits offered by 5G connectivity if they are hindered from populating the spectrum band.