A few days back a director of the electronic music record label Anjunabeats, Paavo Siljamäki, shared a very interesting story about his visit to a Facebook office. He said that a Facebook engineer logged into his account without even asking for his password, that sounds alarming for everyone because anyone's private content can be viewed by unknown people and who knows how many people have this kind of access. Facebook was approached and they gave a satisfactory response for all users. 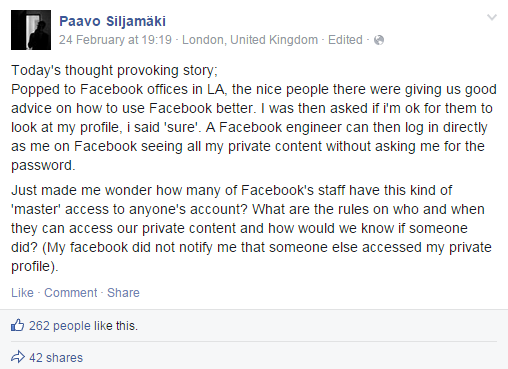 Facebook has a  service tool for its customers that allows it to access its users account at any time without their passwords. But given that, it is only accessible by a certain group of employees and that too under specific circumstances and given conditions which is primarily heavily monitored and a control mechanism is also at work when this is under process. A user given consent is also a major significant part of this process.

A spokesperson from Facebook gave us the following statement:

We have rigorous administrative, physical, and technical controls in place to restrict employee access to user data. Our controls have been evaluated by independent third parties and confirmed multiple times by the Irish Data Protection Commissioner’s Office as part of their audit of our practices.

Access is tiered and limited by job function, and designated employees may only access the amount of information that’s necessary to carry out their job responsibilities, such as responding to bug reports or account support inquiries. Two separate systems are in place to detect suspicious patterns of behavior, and these systems produce reports once per week which are reviewed by two independent security teams. We have a zero tolerance approach to abuse, and improper behavior results in termination.

Some employees are bound to use this tool since their job contains some responsibilities that requires them to use this option. Employees are given a severe harsh warning while they are hired for the job sot hat they know that they can be fired in case they try to misuse this tool in any given scenario. Because it is common for powers to be abused in today's world and that is the only reason Facebook wants to have a control mechanism over this tool so that no abuse of power can be done.

As mentioned in the case before, The Facebook employee was primarily and significantly answering to a given problematic issue Siljamäki had and was also granted permission to take corrective measures in order to resolve the issue at hand. So in short, unless and until you don't ask Facebook for any sort of help or something and have not granted them with approval, you are safe and doesn't need to feel concerned about your privacy being invaded.