As it happens, Apple's Spring Forward event is introducing many of its well rumored products and we must say they all seem very pleasing. But the most important announcement today is Apple's well famed Watch - The Apple Watch. It is the most personal device that Apple has created yet. According to Apple it defines the person for who they are. 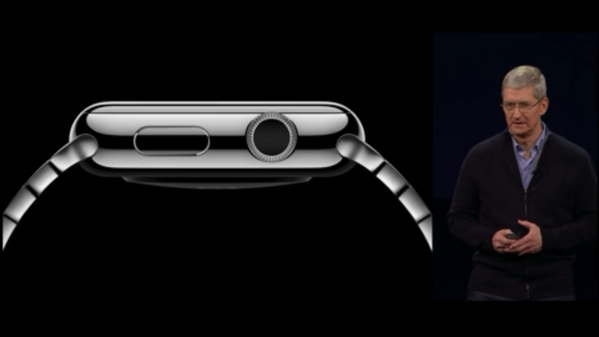 Apple has introduced stunning material and elements to make this Watch which end up giving it a premium feel, quality and design. Apple Watch is a revolutionized time keeping tool along with the best fitness tracker. Apple has kept the changes that rumored. The screen shows a lot of different clock faces which is customization to adding dates, location and reminders. Apple has opened a new dimension to time keeping as well.

In addition, the company has not only provided a modernized look to the Watch but revolutionized the category by modifying the technology to provide new experiences. Apple Watch comes with a Taptic Engine which is the new technology introduced to notify users for a notification through a gentle tap on the wrist.  Taptic Engine allows a person to be notified of the notification. It has a built in speaker and a microphone to receive calls. You can read all complete emails by tapping it and scrolling through. That'not all, Apple watch can be connected to other Apple Watches as well via digital touch method. Moreover to see invitations from your friends, all you need to do is press the display.

Apple Watch includes Fitness modes that track record of your health activity with 3 rings. It can also remind you of your previous week's achievements. Its more like having a personal coach on your wrist if you ask up. It'll end up providing you with a deep record with time of your behavior. Christy Turlington's here to endorse the device's health and fitness applications as well at Apple's event.

Not only this, Glances are a major part of Apple Watch which will help you stay in touch with things that you desire, like sports follow up. Glances, which are swipe actions directed towards the top and the bottom of the Apple Watch screen will enable you to get all kinds of data at the go, including stocks, weather and others.

Speaking of your iPhones, you'll also be able to read complete messages on several apps and reply them with emoticons. Another method to respond to the messages is through dictation which recognizes your voice and provides you with two option to reply. You can either chose to send your voice recording or the voice to speech text which will be really helpful. This can take away the iPhone necessity for replying and move it to a much portable yet fun to use platform.

One of the major features of the Apple Watch is linked with Apple Pay. Double tapping the screen will bring out the credit card information which you will scan at the POS terminal via your Apple Watch and after the transaction, you will be sent a Taptic feedback of the transaction. This feature seems to be a favorite among many users. The other feature that is most important for an average consumer is that you can view and scroll your Instagram photos with a single gesture touch. These features in Apple Watch are indeed that no other Watch has previously provided. You can integrate your Apple Watch with third party apps as well like UBER, which is a car app and allows you to know its current location and more. The fun begins when you double tap the button at the right hand side of the app to reveal your contacts, you can send them a doodle to set the mood. Apple Watch is really going to be interesting for all of us.

Now coming towards perhaps one of the most important feature on the Apple Watch i.e its battery life. Apple says that the Apple Watch will be able to last you 18 hours on a full charge, meaning that you'll be needed to charge your device everyday, just like the iPhone. And as expected, it can be charged using a MagSafe connector, putting all rumors of wireless charging to rest.

One of the most debated and talked about aspects of the Apple Watch, particularly its Gold Edition has been its price, and it hasn't disappointed. Rather, its stunned and that too by a lot. The price will be starting from $349, as originally told by Apple, but here's a stunner. The Gold version of the device has surpassed all rumours and will be costing you a staggering $10,000. Yes, that's not a typo, the zeros after the 1 are four on the price Apple's setting for its premium device. How it plans to achieve any sales, marketing or distribution with that is still not known. Apple Watch Apple Watch Sport edition will cost $349 for the 38mm, and $399 for the 42mm chassis and for the standard Apple Watch, 38mm comes at $1049, the 42mm comes at $1099. That covers our Apple Watch coverage for today. Let us know what you think in the comments section.