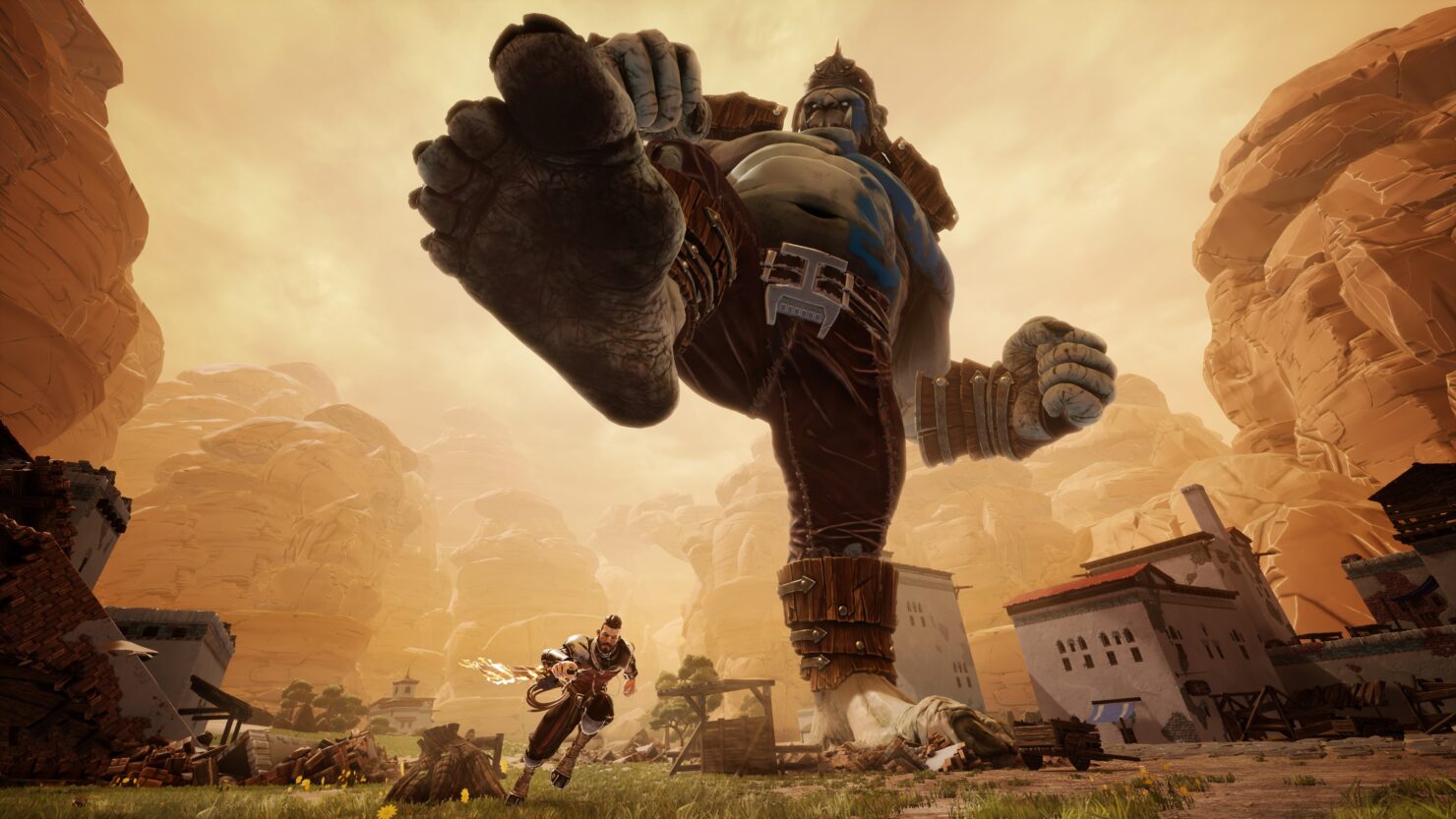 When I think of developer Iron Galaxy Studios, my mind goes to their fighting games: Killer Instinct and Divekick. I was surprised to learn their latest game, Extinction, is an action game that has players taking down giant ogres. At PC Gamer Weekender 2018, I was able to playthrough around twenty minutes of the game, putting me right in the middle of an ongoing battle against minions and monsters.

You play as Avil, a new trainee who has been brought into an ancient order known as the Sentinels. The Sentinels have been around for years, living purely to pass on the techniques and strategies that are required in order to fight against the giants. These one hundred and fifty-foot tall ogres are referred to the Ravenii. Throughout history, they’ve been known to destroy pretty much anything in their path: families, villages, cities. You name it, they are coming to wreck everything. The Sentinels would usually be able to handle the Ravenii with ease, however, for some unrevealed reason, Avil is the only remaining member of the Order. 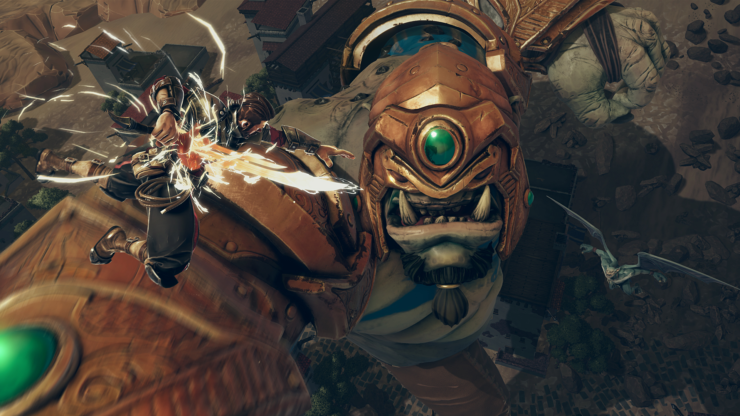 It’s important to know that the world of Extinction has been at war with itself for centuries. For reasons not yet explained, a giant portal suddenly spawned, bringing through these monstrous beings that exist purely to pull humanity apart. As you progress through the game, the story will begin to unfold, revealing secrets about both the Sentinels and the Ravenii. The developers have told players to expect a number of twists as not everything is as straightforward as it may seem.

The key aspect that separates Extinction from other action games these days is Iron Galaxy’s expertise in the fighting game genre. Iron Galaxy want to bring high-level execution to traditional action games that typically see players performing the same boring combos over and over. While some action games force players into predetermined combos, Extinction allows players to cancel into any attack they want to. 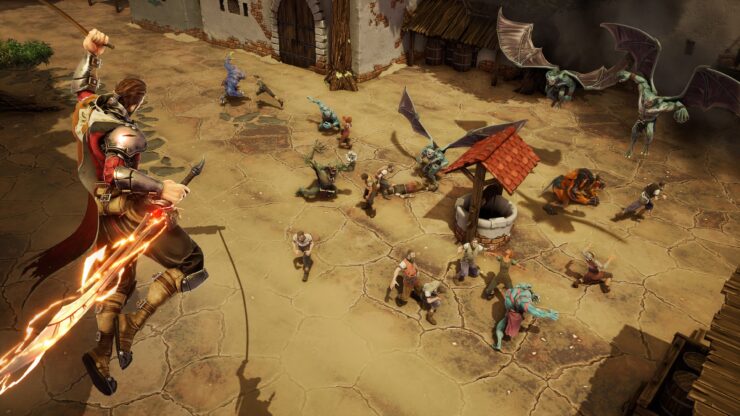 This is where Iron Galaxy lost me. I am aware of the work Iron Galaxy have done over the years, but at no point during my time with Extinction did I feel like their knowledge of fighting games shone through in this short demo. Fighting against the minions as you try to rescue as many villagers as you can felt like I’d played this game hundreds of times before. Go to A, mash the ‘X’ button to kill minions, hold ‘B’ to revive villagers.

There wasn’t any depth to the combat in this early stage of the game, but I suppose that is to be expected. I understand that there will be a learning curve to fully understand all of the combat systems so don’t read into these complaints too much. If the full game turns out to be a longer version of what I played, I would be incredibly disappointed as Extinction shows some real promise in regards to the combat.

The Ravenii stand over one hundred feet tall making it quite a challenge for anyone to try and take them on. Thankfully, Avil boasts a number of movement options that make scaling giant ogres a very simple task. Reaching the top of the Ravenii is only half the job. At this point, players will need to execute a magical rune strike in order to land the killing blow. Avil must charge up his rune energy by killing minions, saving villagers and destroying the Ravenii’s armor before trying to take on these huge monsters. Once the rune’s energy is at max capacity, that is when you need to go for the decapitation strike.

Taking on the Ravenii might sound easy, but each fight with these ogres will never be exactly the same. There are thousands of different combinations of Ravenii, each sporting their own type of armor and unique attacks at their disposal. Whereas one ogre might wear basic armor that is easy to break off, another ogre may come prepared with barbed wire armor, hurting Avil when he tries to get close.

My fight with the Ravenii was comparable to the fights with the minions in that it was a very simple process. Break the Ravenii’s armor to access its weak point; finish up by going for the killing blow. There was the added pressure of having constant reminders that villagers needed to be saved from the minions. These reminders come with time limits so you can access whether or not you have the time to do everything on your list. I felt like taking down the huge ogre was slightly more important to the village than saving an extra one or two people. Better players will probably be able to juggle all of these objectives at once.

Now, I know what you anime fans are probably thinking... this game sure does sound a lot like Attack on Titan. Well, there’s not much room to defend Extinction here. Sure, AoT and Extinction seem very similar in terms of the concept, and yes, even the two games share some similarities both visually and mechanically but, uh, the Ravenii are different because they wear armor. See, they are completely different.

Visually Extinction stood out among a lot of the games at the event because of the setups being used. It was clear the game was running at an impressive 120fps which is exactly what you want to see when playing a fast-paced, fluid action game like this. Based off what I saw at this event, I feel comfortable saying the PC version is looking like the definitive version of Extinction already. Of course, this may not be the case at launch, however, I personally would feel more than happy to make a pre-order for the PC version knowing that it should run perfectly. As of right now, there hasn’t been any information given about how smoothly the console versions run.

The short segment I played of Extinction didn’t impress me all that much, but I remain cautiously optimistic about it as there is a lot of potential to be uncovered. The chunk of gameplay I played through seemed like a tutorial. The main game will probably be a lot less repetitive when players are able to unlock the majority of the combat abilities and when the types of minions you fight against become varied.

There isn’t much of a wait for Extinction as it launches on April 10th for PC, Xbox One and PlayStation 4. You can pre-order the game via Amazon.