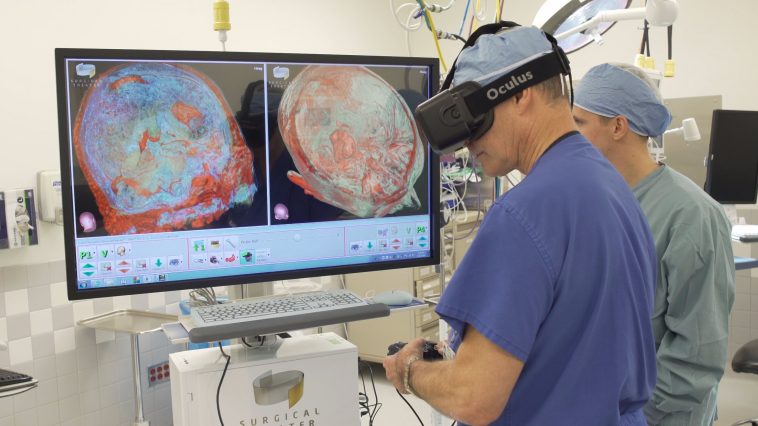 The similarity in fighter pilots and brain surgeons is interesting. They both have no time to lose and must make decisions quickly. The risks are high and in the case a faulty decision is made, well, the results could be catastrophic. Both these occupations hence try to find new ways to minimize damage and to increase efficiency. Alon Geri and Moty Avisar are probably most aware of the circumstances involved and the conditions under which decisions must be made. They are veterans of the Israeli Air Force and are co-founders of Surgical Theatre, which is an Ohio based company that is responsible for bringing virtual reality to brain surgeons. So, this seems interesting enough. But what good does this do? What happens when VR is involved in surgeries?

It’s not very hard to imagine how this affair is conducted. Physicians wear VR head gear can enter the patient’s skull and examine the entire structure of the brain. They can examine and determine what the problem is, they can strategize all steps of the surgery and they can even conduct dry runs of the surgery. This saves a lot of shocks and unwanted surprises once the incision takes place.

The Surgical Theatre uses a technology called SNAP- Surgical Navigation Advanced Platform. This technology uses VR compatible MRI scans that are used to create 3D models and simulations that aid the physicians in the entire process. Geri and Avisar developed this SNAP after they had worked extensively on flight simulations. Their experience with flight simulations enabled them to create a state of the art virtual reality system. They had realized as early as the early 2000’s that the problems associated with brain surgeries was very similar to the problems of pilots. In an interview with Tech insider, Geri said "You do it wrong the first time, and it’s either game over or you spend the rest of the surgery putting out fires”.

They started in 2005 and spent three years trying to craft a successful solution to the usual flat, colorless MRI scans. They worked hard and worked extensively and eventually in 2013, their technology received FDA clearance. And as VR progresses towards a new era, doctors can now successfully make their patients see a full color 3D rendering of their scans.

Robert Louis, program director of the Skull Base and Pituitary Tumor Program at Hoag Neurosciences Institute in Newport Beach, CA described the difference between the conventional MRIs and SNAP as "It’s like the difference between a flip book and 4K”. He also added,” They’re not even close to the same level."Hoag has been using the SNAP technology successfully since December 2015. Louis said, “It’s really making a big impact on the way we do things.”

We can imagine why this must have created a difference and research confirms why. Its basic psychology, that once the patients are more involved in their own health procedures, they tend to feel more comfortable and in control. SNAP allows the doctors and likewise the patients as well to look inside the brain. According to Louis, SNAP has allowed them to make more successful surgeries and quick patient recovery. Unnecessary incisions and mistakes have reduced considerably and this had created an entirely new prospect in the surgery department.

Using SNAP is much more than just successful surgery

SNAP is currently being used in 9 locations worldwide including Stanford, UCLA and New York. Geri is hoping that a tenth location will be adopting this technology this year. Approximately 900 surgeries have been performed using SNAP till now. The duo is hoping that in the years to come, SNAP will advance and cover more surgery departments and will provide more depth and detail than before.

Louis has talked about the things this technology has done for them so far. He described that how SNAP just showed anatomical structures in the beginning and how SNAP has advanced and now shows functional pathways using 3D models. When excising a tumor, it is easier now to avoid structures that are vital to speech and movement. Doing so was very difficult in the beginning. Louis said, “You can’t see those with your naked eye or even with the microscope”. Well we know now that we can trust surgeons even more now that they can use SNAP.

Louis and Geri agree on one common aspect. SNAP and VR have a strong place in the medical world. Louis likes the fact that patients now are able to understand the complications of their diseases better and can be more co-operative than before. Geri believe that SNAP has a much deeper significance that just that. He said, “The first time I was in the operating room, it was very emotional for me. I remember thinking about how I transitioned from flying war machines to developing life-saving machines.” Well this is indeed a very sweet thought, no denying that. We will be seeing more of SNAP in other countries too in the future as VR will most definitely take over the world in the years to come. More companies will be creating similar products and the medical world is definitely looking towards a new and a more defined era.