We have been closely following the news cycle on alleged capacity constraints at AMD for quite a while now and with no clear answer, we thought it was time to do some digging of our own. This story is focused around the recent interest in AMD's mobility processors (specifically Renoir) and is based on multiple sources spread throughout ODMs, AIBs, and industry contacts that deal directly with logistics (based out of Taiwan). All information presented has been carefully vetted, cross-checked and should be independently verifiable by anyone wishing to do so.

AMD Renoir shipments to ODMs tripled from Q1 to Q2 with overall mobile shipments at a record level, supply chain is scaling at an unprecedented pace

AMD's Renoir is an APU that is the culmination of an effort almost 4 years in the making. Combining the best of every world for laptops and notebooks, Renoir promises to provide one of the fastest computes, amazing graphics, and huge battery life at a cost lower than ever before. We have covered Renoir extensively in the past and our in-house polls have indicated it as one of the most eagerly anticipated chips from AMD. That said, fluctuating regional/retail availability of notebooks has sparked speculation about potential capacity constraints over at AMD and this is something we will investigate today.

The first thing we did was reach out to AMD for an official statement and while they had the following comment prepared for us, in typical AMD fashion, they decided not to reveal anything further:

This comment from AMD does confirm that the company is scaling up production to meet demand, but it still doesn't address the core of the issue. It also contains a very interesting hint which I will reference later. Lack of availability can usually be attributed to two different causes: a supply bottleneck (capacity constraint) or an excessive, unprecedented surge of demand that creates a temporary "supply chain lag" in the ecosystem. To answer this question, I reached out to some sources that are familiar with these issues and got some interesting facts back.

Before I state the gory details, let's go over some publicly known context: AMD has already revealed that they delivered a record number of mobile shipments last quarter. They have also confirmed that Renoir is the fastest revenue ramping notebook processor in their history. With that in mind, based on my conversations across AMD's supply chain, I can exclusively confirm the following:

Just to spell it out again, AMD's unit shipments for Renoir, to ODMs, increased by 200% over a single quarter. That is a scaling of already unprecedented volume and it is continuing to rise. We also learned that out of AMD's mobile shipments, Renoir was the best-selling processor of the quarter. It is clear that the company is being bombarded by excess demand and they are scaling up to meet it, so the question then becomes, did they not foresee this demand or do they not have the capacity to meet it?

To answer this, I would like to reference one of the stories that recently caught the attention of AMD supporters: a post by XMG on Reddit about a supply constraint of Renoir processors. There is a fundamental confusion when dealing with supply chains that customers usually aren't aware of. To give you an idea, XMG does not buy directly from AMD. XMG also does not normally talk directly to AMD (although they do appear to have an unofficial comment which they are attributing to AMD). 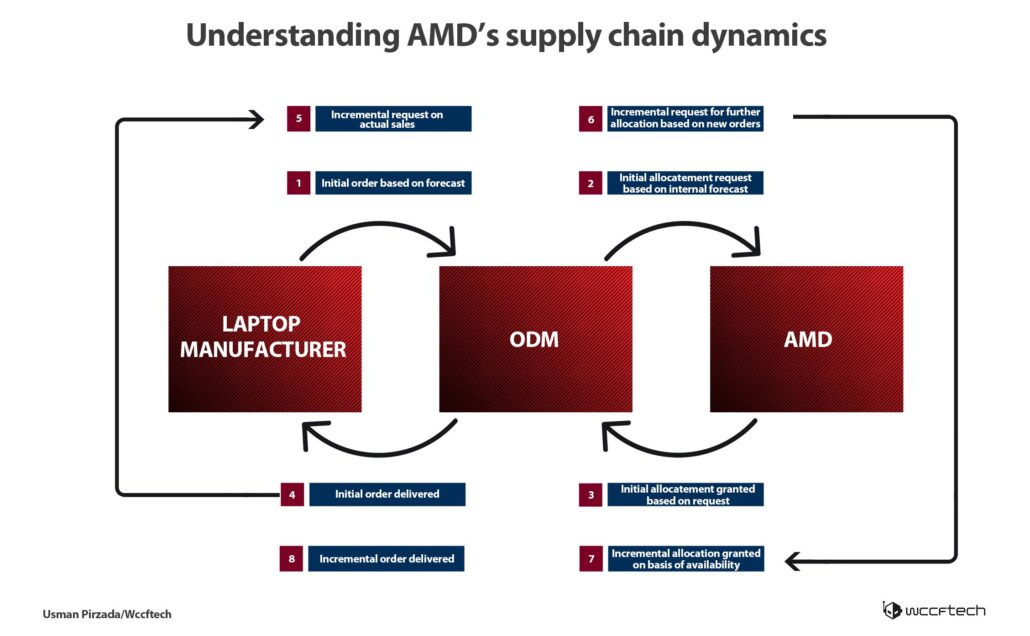 XMG buys white boxes from an ODM, which in their case, is a company called TongFang. TongFang is the one that actually puts in an order at AMD which AMD allocates against availability. To understand what's happening, let's take this step by step. Laptop manufacturers like XMG would have an initial forecast of how they expect a certain SKU to perform and based on that, they would put in an order at TongFang. Remember, no one wants to hold excess inventory, so when in doubt, forecasts are always conservative and typically underestimate demand.

TongFang then collects all orders from its customers and applies *another* internal forecast (which would also typically be conservative) and sends in their initial order to AMD for allocation. AMD will typically allocate this order in full. Now here is where things get interesting. Let's suppose actual demand for the ordered chip is vastly higher than anticipated - then TongFang, based on additional orders from its customers would put in something called an "incremental request" to AMD for "incremental allocation".

This is something that AMD can fulfill if they have an excess supply of chips lying around - and only if. If they do not have excess supply, then they will have to put in orders for new chips (assuming they have the capacity for it) and something called a supply chain lag will come into effect as AMD deals with ODMs having incorrectly forecasted their own sales. It is at this point that you begin to realize how dependent the supply chain is - not on AMD's capacity to produce chips - but on ODM's ability to correctly forecast demand.

This is also what is happening with TongFang and XMG. With TongFang having potentially incorrectly anticipated aggregated demand of their orders (remember they likely do not send over the total orders they receive, they apply internal forecasts on that too to make sure they aren't left holding excess inventory), we now have to wait as AMD fabs new chips from them since they did not have excess inventory lying around. They can do this because of course, they have additional capacity available. The confirmation for this can also be seen in AMD's statement with the wording "incremental demand requests". This is essentially not a capacity limit or bottleneck, but a supply chain lag caused by customer demand differing from original forecasts, which should be filled up nicely in a month or two as AMD clears the backlog of incremental requests.

So to answer the question, no, AMD is not capacity constrained. They are experiencing a supply chain lag due to conservative forecasts by the ecosystemas well as unprecedented demand for a product that has brought strong competition back to the market, and should be able to rise up to meet demand in a month or two. This is one of the reasons why I believe AMD has also guided up on revenue (since they expect to be able to meet any further demand). On the contrary, AMD's ability to scale to demand is actually impressive considering the 200% increase in unit shipments over a quarter and more on the way.