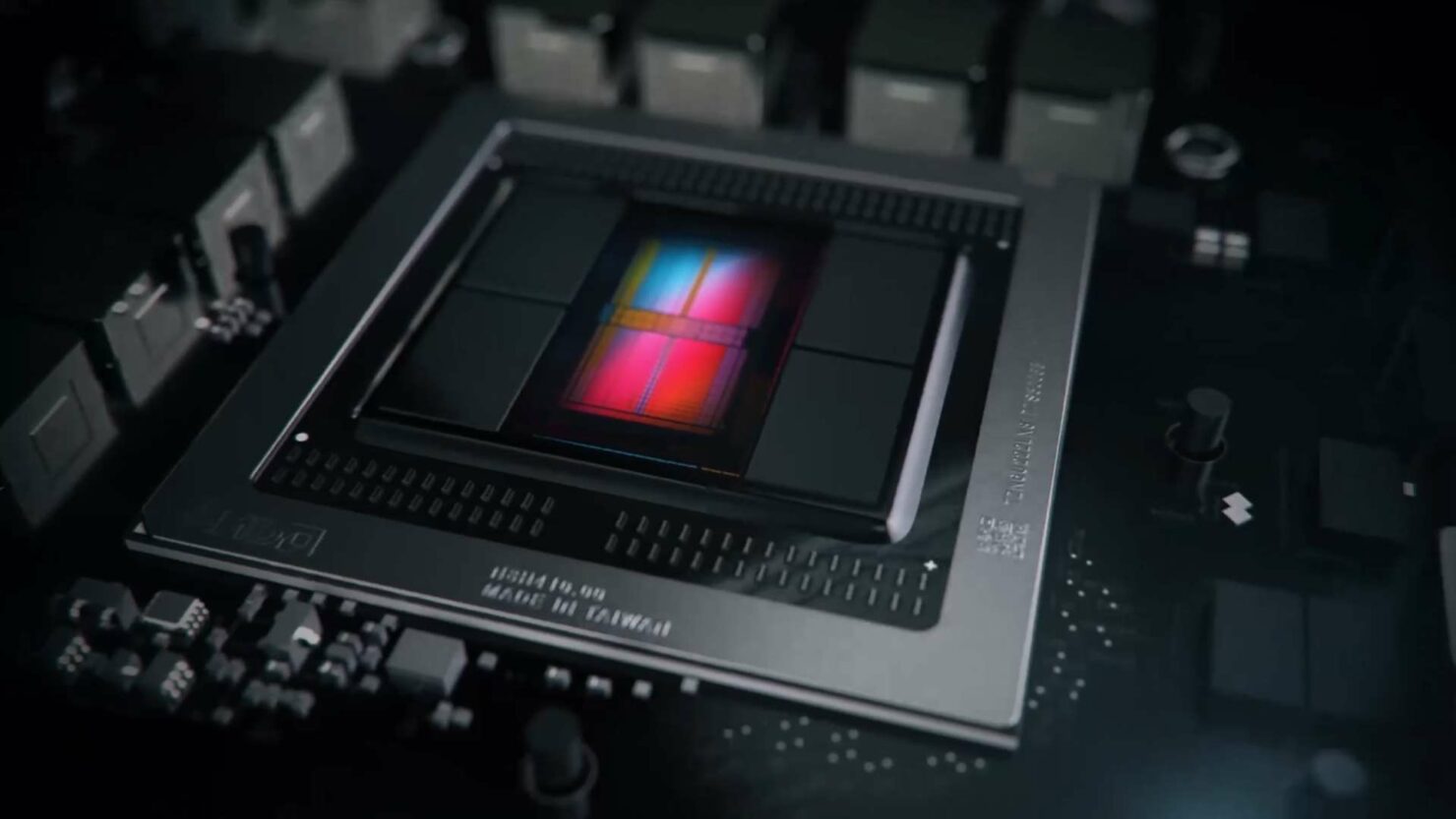 So I have a very interesting update today. I have learned that AMD is preparing two new GPUs for the mobility space: Radeon RX 5500M and Radeon RX5300M (we have already seen the desktop variant). We even managed to get our hands on specifications and benchmarks for these as well - so this is going to be a good one. Both GPUs are going to be manufactured on the 7nm process and will go up against NVIDIA's mid-end mobility lineup consisting of the GTX 1050/GTX 1050 Ti/GTX 1650/GTX1650 Ti etc.

AMD's new Navi based Radeon RX 5500M and RX5300M are based on the 7nm process, feature high clock speeds and GDDR6

NVIDIA has yet to shift to a sub-10nm process, which means AMD has an excellent window of opportunity to strike while the metal is hot. AMD is planning to roll out mobility GPUs based on the 7nm process that will not only feature GDDR6 (giving them an advantage over competitors like the GTX 1650) but will actually out-clock NVIDIA! This is something that I haven't seen for quite some time but based on the slides and information we received, AMD's mobility GPUs are actually going to be clocked higher than NVIDIA counterparts by quite a margin. 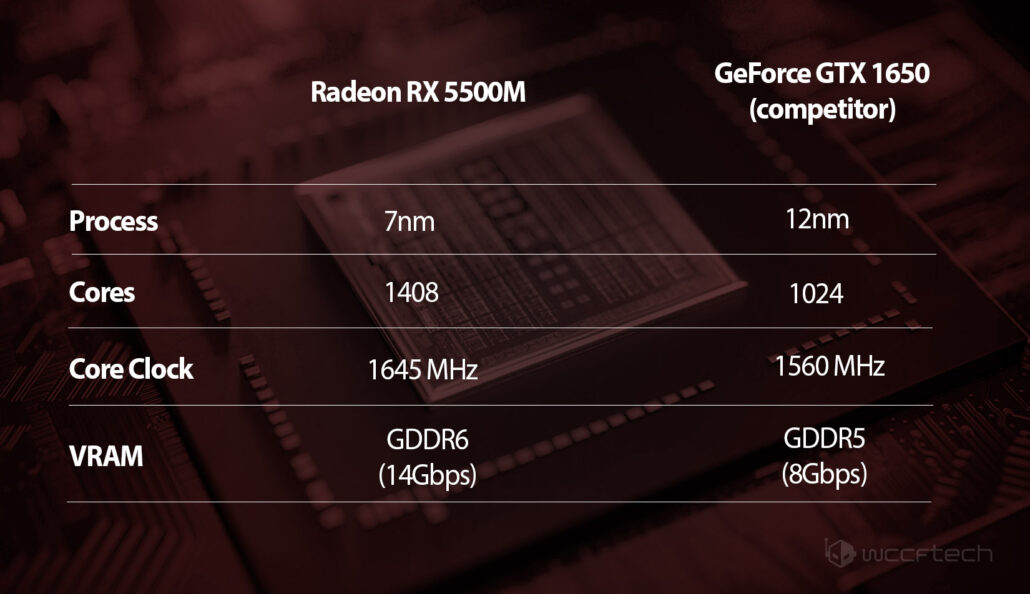 So let's talk about specs. Our source was able to give us the specifications for one of the GPUs: the Radeon RX 5500M. The Radeon RX 5500M mobility GPU is based on the RDNA architecture and will have 1408 cores. It will feature GDDR6 memory clocked at 14Gbps (we aren't sure of the exact capacity). The GPU will be able to boost up to 1645 MHz. Our source tells us this will be positioned to go up against the GTX 1650 - which is based on the 12nm process, rocks the older GDDR5 standard, features only 1024 cores and boosts up to 1560 MHz. Based on these numbers alone, you can tell that the RX 5500M should easily be able to outperform its green counterpart. 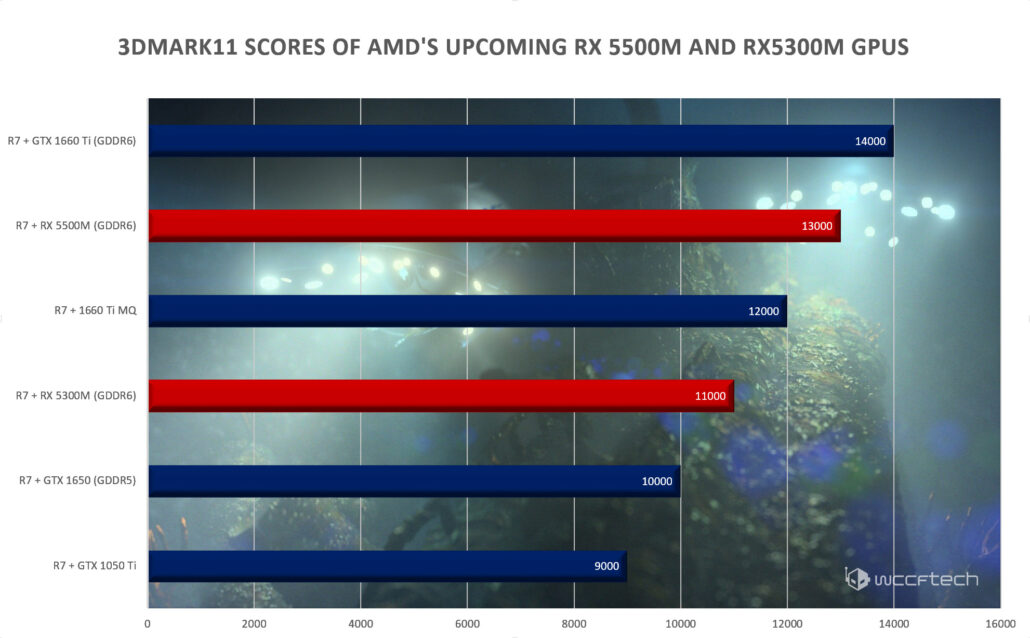 Fortunately (and this is a rare occasion), our source managed to provide us with benchmarks as well. Unfortunately, however, all in-house testing was done using the older 3DMark 11 variant and might not capture the full effect of memory bottlenecking and other nuances of today's DX12-based gaming world. It does give us a very good idea of how the ranking will stack against NVIDIA however.

All the benchmarks you see above were conducted in a mobility environment and using a Ryzen 7 processor. The GTX 1050 Ti (the last-gen mainstream mobility king) scores a cool 9000 points in 3DMark 11. The GTX 1650, which also rocks DDR5, manages 10000 points. The upcoming Radeon RX 5300M mobility GPU from AMD scores 11000 points - making it faster than the GTX 1650 from NVIDIA. The GTX 1660 Ti is the first card to introduce GDDR6 in this ranking and in a Max-Q format achieves 12000 points. The upcoming Radeon RX 5500M mobility GPU scores 13000 points. NVIDIA's GTX 1660 Ti in a non-MaxQ format still manages to retain the performance crown with 14000 points.

The punchline then will be the pricing. Depending on how AMD prices this (and knowing AMD, these will usually be very good from a price/performance point of view) the RX5500M and RX5300M could end up offering a lot higher value than the NVIDIA counterparts - especially when coupled with a Ryzen 7 processor (making it a single vendor build and leading to cost savings for OEMs which eventually trickles down to consumers). I wouldn't be surprised to see laptops rocking these configurations beat the $1000 mark.

The Radeon RX 5300M has the potential to become a very competitive mainstream offering and could end up giving significant trouble to NVIDIA's GTX 1050 Ti/GTX 1650 based configurations - which as far as I understand are a major chunk of mobility revenues. The RX 5500M is a bit harder to price correctly but depending on the TDP and cost to the OEM, this could easily become a winning combo for AMD as well when coupled with R7 CPUs. AMD has already achieved a resounding comeback in the CPU side, and it looks like the mobility GPU side is next.