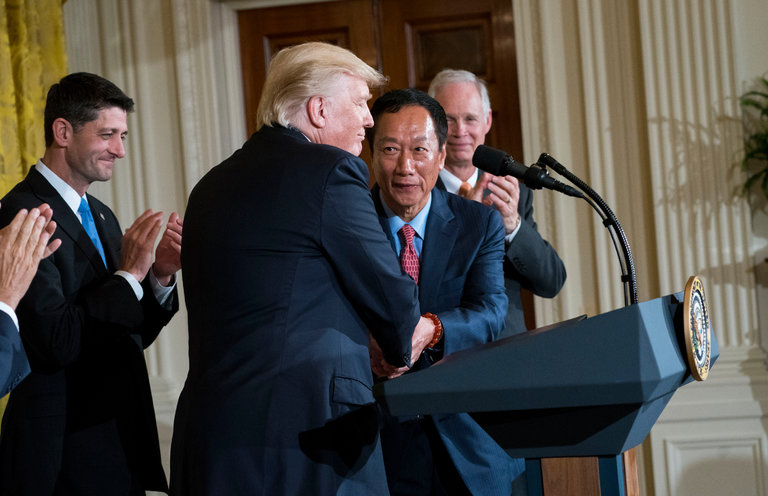 Foxconn’s (TPE:2354) former boss Terry Gou has had his political career put on pause, after losing the nomination of Kuomintang party leadership to rival Han Kuo-yu.

Gou stepped down from Foxconn in June to focus his efforts on his leadership campaign. Publicly he has declined to dismiss mounting speculation that he would consider running as an independent if he failed to secure the KMT nomination. If he chose to run as an independent, he would have no problem self-financing a campaign as his net worth is approximately US $6.8 billion.

During the campaign for leadership, Gou touted both his diplomatic and business credentials as his strength. While Gou has never held a political office before, he’s the only one of the candidates running to have met both Chinese President Xi Jinping and Donald Trump. Gou says, as president, he’d be able to meld diplomacy and business together drawing on his experience as CEO of Foxconn.

Gou laid out his policy on Taiwan’s place in a trade war at a Digitimes event in Taipei called ‘G2 and Beyond’ in late June. Gou argued that the Trade War shows that all future trade disputes between the US and China would have their roots in technology, as that’s the biggest industry with cross-exposure to both economies.

Gou argues when it comes to the exports of semiconductors, the US should differentiate between consumer goods such as notebooks, handsets, and TVs, and dual-use technologies with a military or other sensitive application. This should any element of uncertainty within the China production market and US export market. As far as 5G is considered, Gou advocates equally splitting responsibility for development: the US would produce the integrated circuit and design technology while China would be responsible for assembly. Made in China, Designed in the US.

The alternative, as brought up during the conference, would be a fragmented set of standards that divides 5G between US and China spheres of influence. This wouldn’t be a great alternative for manufacturers as it would severely impact the total available market and add a layer of complexity to handset vendors that want to sell devices in both markets.

Gou knows how a fragmented market would impact the bottom line of many tech companies. Having to make multiple versions of the same handset to account for different basebands would be burdensome. In the end, slicing the total possible revenue in two very different ways means less for everyone.

While there are already two ecosystems in place for SaaS, with Tencent (HKG:0700) and Alibaba (NYSE:BABA), effectively splitting the market in China there are limits to growth in one country -- hence their desire to expand internationally.

In the end, economic pragmatism needs to rule rather than regional fiefdoms. While parts of the trade war do have merits -- China is notoriously protectionist of its own firms -- in the end, it would be in everyone’s best interest to have the trade war contained and not spiral out of control.

Taiwan has a role to play in this, as it can be a middleman and hub in the broader Asia manufacturing sphere in a similar way to how Hong Kong is finance’s meeting point for East and West in the region. If Gou decides to run as an independent, no doubt that’s going to be a pillar of his campaign.