At their CES 2015 booth, EVGA had the chance to showcase their beastly GeForce GTX 980 Classified K|NGP|N Edition graphics card along with the GeForce GTX 980 Hydro Copper. Both cards are based on NVIDIA's Maxwell GM204 core architecture and pumped with higher factory overclock and beefed up PCBs which deliver amazing overclocking potential over the reference variants.

Coming in the next few weeks, both the GeForce GTX 980 Classified K|NGP|N and GeForce GTX 980 Hydro copper are aimed towards enthusiasts and overclockers who demand the best. Starting off with the GTX 980 KPE which has been teased several times before, the card is based on the GM204 GPU with 2048 CUDA Cores, 128 TMUs and 64 ROPs. The card sticks with the 4 GB GDDR5 memory bus which operates along a 256-bit bus interface however the clock speeds remain unknown. An official shot shown by KingPin himself demonstrated the card reaching an overclocked speed of 2166 MHz core and 4451 MHz on air cooling which is a tremendous overclock pumping out 569.7 GB/s bandwidth. The default clock speed is configured around 1317 MHz for the core however those clock speeds are said to be preliminary and will be updated when the card launches. With these specifications, the card scored 20816 points in 3DMark Firestrike (Performance mode).

While the core clock remains to be seen, the card comes with great aesthetics adopting a large aluminum or plastic shroud which has acrylic cut outs all over the frame. There are three GeForce GTX 980 Classified labels scattered on the front and sides of the shroud which emit RGB colors to add a good affect to the card when its operating. The colors are adjustable by the user and are not much bright at all. The card features dual PWM fans which regulate air towards the central heatsink chamber made up of two aluminum fin blocks which are interconnected through several heatpipes (around 6-8 heatpipes in total). Much of the central heatsink layout can be seen through the acrylic cut outs on the shroud.

The PCB is an extended version like the one featured on the previous Kingpin edition cards to incorporate more VRMs and phases for improved stability and power delivery. The PCB comes with a support bracket and base plate that adopts a dragon theme as can be seen in one of the pictures posted by Kingpin himself. It also comes with a large back plate which features cut outs for several voltage points. Of course, EVGA has featured their enthusiast grade Evebot connector on the PCB and a triple BIOS supporting Normal, OC and LN2 modes for the graphics card. The power delivery of the card is just insane featuring two 8-Pin connectors and a single 6-Pin connector and was even shown running on their booth. One of the great features about the card is its single slot design. The EVGA GeForce GTX 980 Classified K|NGP|N ships with both single and dual slot brackets and is a good addon for many users who want to use water blocks on the card and need to go SLI in the future to conserve space for maximum airflow. Display outputs include a DVI, HDMI 2.0 and three mini display ports. The card is expected to hit retail this quarter at a premium price point.

EVGA also showcased their GeForce GTX 980 Hydro Copper AIO (All-In-One) edition graphics card at CES 2015. Although the Hydro Copper name is for internal use by EVGA only, they have however advertised the card as HC AIO. Coming to the specifications, the card adopts the reference GeForce GTX 980 design however adopts liquid cooling through a looped cooling design and cooled by a 120mm radiator. The clock speeds for the Hydro Copper are not known at the moment except that it has a reference PCB design and standard display outputs. The card launches this month for a price tag around the $599 US range. Do watch the entire presentation of the EVGA CES 2015 booth courtesy of Youtuber, JayzTwoCents below: 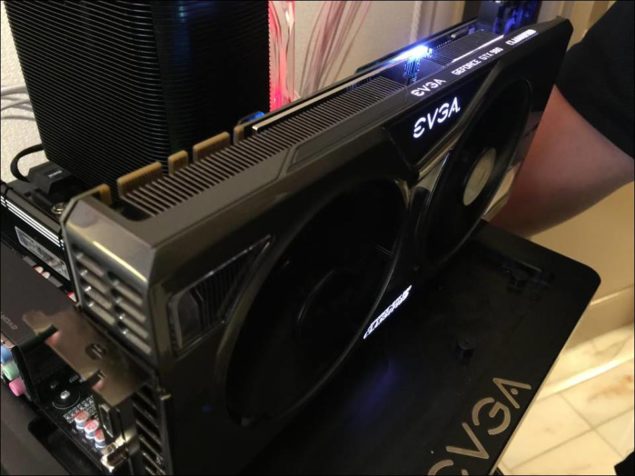 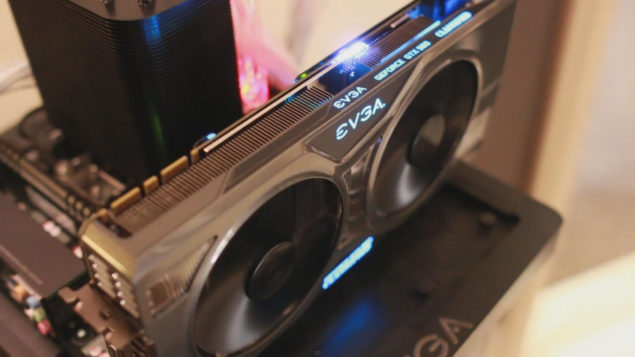