The EVGA X79 Dark comes in the E-ATX form factor and an all black PCB with a heatsink layout that aims to impress the masses. There are three sets of heatsinks featuring a red and black color theme. One heatsink is situated on top of the I/O panel, one on the PWM supply and the largest one is located on the X79 PCH which comes with a large E sign.

The motherboard comes with a 12+2 phase VRM for the CPU and a 4 phase supply for the memory. The PCB itself is of 12 layers enhancing cooling for overclockers and making use of top of the line components and best industry's IR power stages, for efficient power to your CPU. The motherboard is provided power through dual 8-Pin power connectors. EVGA's X79 dark comes with four DDR3 DIMM slots which allow for 64 GB of memory capacity with frequencies of upto 2400 MHz O.C+. Expansion slots include five PCI-Express 3.0 x16 slot, two of these slots are x16 capable while all five are x8 electrical. There's also an PCI-e x4 connector which can be used for additional add on cards. There's an additional 6-Pin connector at the bottom of the board to provide extra juice to the PCIe when using multiple graphic cards. EVGA has also created a new UEFI BIOS for the X79 dark similar to what we saw on their Z87 lineup. 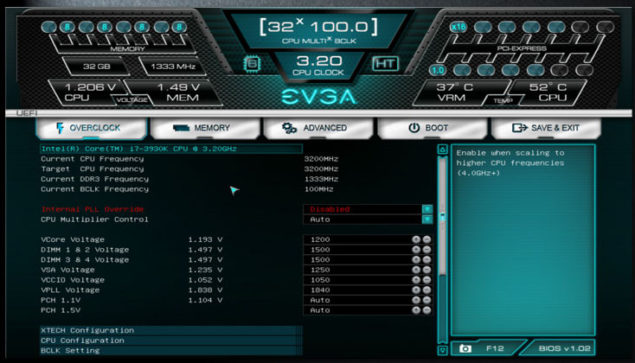 For storage, the EVGA X79 Dark offers six SATA 6GBps and four SATA 3GBPs ports along with two eSATA 3GBps ports. The SATA 3GB/s and eSATA ports are offered via an external controller while the 6GB/s ports are provided off the X79 PCH. The board supports RAID 0, RAID1, RAID 0+1, RAID5, RAID10 and JBOD configurations. There's a variety of connectors at the I/O panel which include 8-channel HD audio, two gigabit Ethernet LAN ports, six USB 3.0 ports, Bluetooth, and a number of USB 2.0/1.1 ports. The EVGA X79 Dark retails for $399.99 US.